The integument or skin covers the surface of the body protecting it from harmful environmental influences. Because the skin is easily accessible, it is important in physical exams.

The skin forms an envelope for the body's structures and vital substances (liquids), thus forming the largest organ in the body. 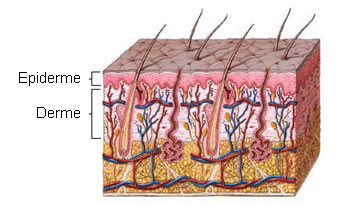 The skin is made up of:

The epidermis, or cuticle, is not vascularized, consists of stratified epithelium, conforms perfectly to the papillary layer of the dermis, and varies in thickness in different parts. In some places, such as the palms of the hands and soles of the feet, it is thick, hard and horny in texture. The stratified epithelium of the epidermis is composed of several layers named according to different categories, such as cell appearance, texture, composition and position. These layers are, from superficial to deep: stratum corneum, stratum lucid, stratum granulosum, stratum spinosum, and stratum basale. The stratum corneum is a remnant of cells that contains a fibrous protein, keratin. 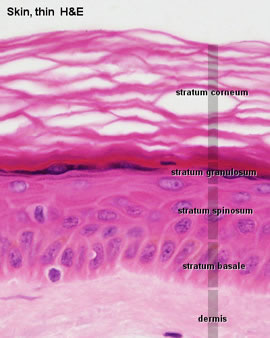 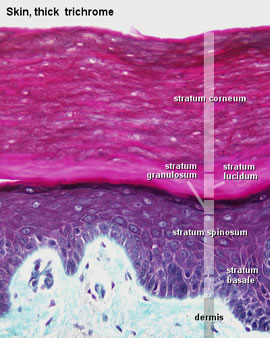 The coloring of the skin is due to the pigments in the cells of the epidermis. This pigment is most distinct in basal layer cells. Pigment (melanin) consists of very small, dark brown or black granules closely packed together within cells.

The dermis, corium, true skin or true skin is tough, flexible and elastic. It is thicker on the dorsal surface of the body than on the ventral surface and on the lateral rather than the medial surface of the limbs. On the eyelids, scrotum and penis it is excessively thin and delicate.

The skin consists of connective tissue with a variable amount of elastic fibers and numerous nerves, blood and lymph vessels. Connective tissue is arranged in two layers: one deep or reticular and the other superficial or papillary.

The reticular layer consists of fibroelastic connective tissue, composed mainly of collagen bundles. The cells of this layer are mainly fibroblasts and histiocytes. In the deeper layers of the reticular layer are sweat and sebaceous glands, hair follicles and small accumulations of cells. 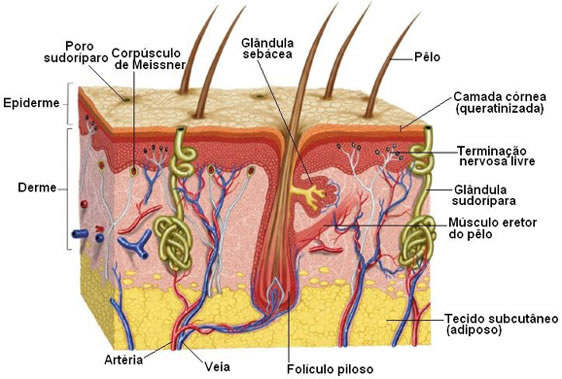 The papillary layer consists of numerous highly sensitive vascular eminences, the papillae. The papillae are small conical eminences with rounded or dilated ends.

The dermis is situated over the subcutaneous tissue. This last layer is not considered to belong to the skin and is therefore called the mesh or subcutaneous tissue or hypodermis. Subcutaneous tissue is mainly composed of loose connective tissue and adipose tissue. It performs two main functions: it helps insulate the body from extreme variations in the environment, and it secures the skin to underlying structures. Few areas of the body lack this tissue; in these places, the skin is attached directly to the bone. The skin on the joints and fingers is creased and wrinkled because it adheres to the bone. 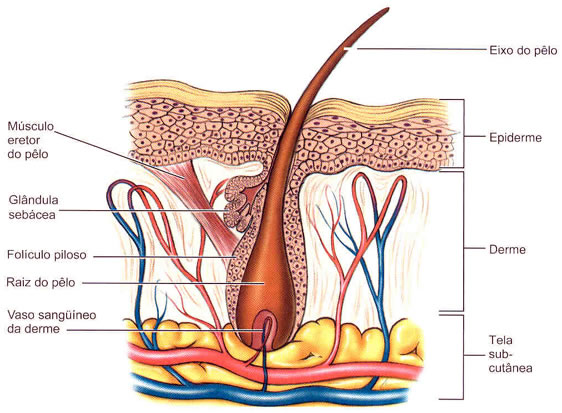 Attachments to the skin are nails, hair, and sweat and sebaceous glands with their respective ducts.

Hair : They are found on almost every surface of the body. They vary greatly in length, thickness, and color in different parts of the body and in the various human races. A hair consists of a root (the part implanted in the skin) and a stem (the part that protrudes from the surface). 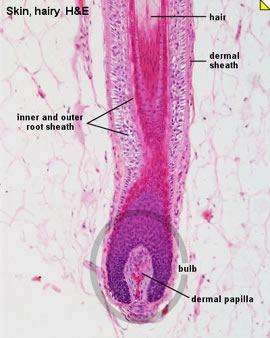 The hair root ends in the hair bulb, which is whitish and softer in texture than the hair shaft and is housed in a canaliculus of the epidermis that surrounds it, called the hair follicle. At the bottom of each follicle is a small vascular conical eminence or papilla. It is continuous with the dermal layer of the follicle and supplied with nerve fibrils. The hair follicle consists of two tunics: external and internal or epidermal. The hair bulb is molded over the papilla and is composed of polyhedral epithelial cells that, when passing into the hair root, elongate, becoming fusiform. The hair shaft consists, from the inside out, of three parts. : the medulla, cortex and cuticle. The medulla is usually absent in the fine hairs that cover the surface of the body and commonly on the head. It is composed of rows of polyhedral cells containing eleidine granules and often air spaces. The cortex forms part of the stem; their cells are elongated and joined to form fusiform to flattened fibers containing pigment granules in dark hairs and air in whites. The cuticle is made up of a single layer of flattened scales that overlap from depth to surface.

Correlating to the hair follicles is a set of tiny bundles of involuntary smooth muscle fibers called erector pili. They emerge from the superficial layer of the dermis and insert into the follicle. They are placed on the side where the hair leans, and by their action they reduce the obliquity of the follicle, making it straight. 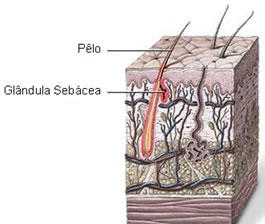 Sweat glands (Gl. of sweat) : they are found in almost every part of the skin. They consist of a simple tube whose deep part constitutes a spherical or oval pouch called the body of the gland, while the upper part or duct passes through the dermis and epidermis, opening on the surface of the skin through a funneled opening. In the superficial layers of the dermis the duct is straight, but in the deep layers the duct is coiled or even twisted. They are very abundant on the palms of the hands and soles of the feet. 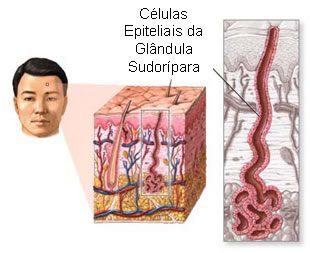 Sebaceous Glands : These are small, sac-like glandular organs housed in the dermis, found in many parts of the skin, but in abundance on the scalp and face. Each gland consists of a single duct that emerges from an oval or bottle-shaped grouping – the alveoli, which are generally two to five, and in some cases, up to twenty. Each alveolus is composed of a transparent basement membrane containing a number of epithelial cells. 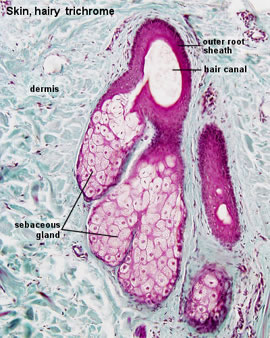 Sensory Receptors Found in the Skin

Free Nerve Endings : They are found in all connective tissues. They are myelinated or unmyelinated, but always of small diameter and low conduction velocity (Group III or Group IV). They can be polymodal or unipodal (nociceptors). They are sensitive to mechanical, thermal and especially painful stimuli. They are formed by a branched axon surrounded by Schwann cells, both surrounded by a basement membrane. 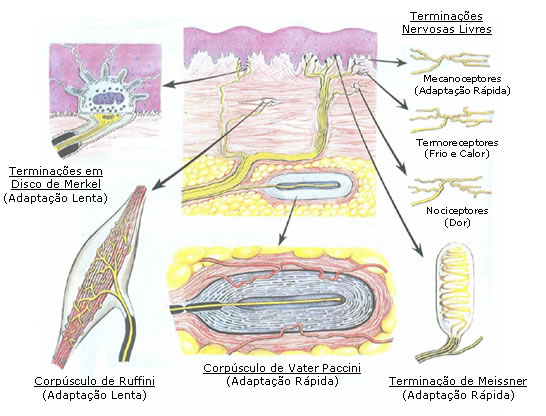 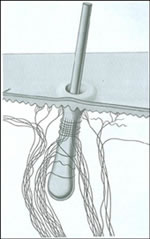 Palisade Endings – The fibers approach the follicle in different directions, just below the sebaceous duct, where it divides and runs parallel with the hair in the outer follicular layer. They are characterized as free nerve endings.

Tactile Menisci (Merkel's Cells) – An afferent fiber is usually branched with several terminal disks of these nerve branches. These discs are enclosed in a specialized cell, whose distal surface is attached to the epidermal cells by an extension of their protoplasm and interdigitates with adjacent keratinocytes.
Thus, pressure and traction movements on the epidermis trigger the stimulus. They are mechanoreceptors (Type I) and slowly adapting, receptive to vertical pressure and served by large myelinated afferents (A alpha). They are found on the distal parts of the extremities and on the skin of the lips and external genitals.

Tactile (Meissner) Corpuscles – Found in the dermal papillae of the hand and foot, anterior part of the forearm, lips, eyelid, and tongue. It has a cylindrical shape and has a connective tissue capsule and a central core with myelinated nerve fibers. They are rapidly adapting mechanoreceptors, providing information about rapidly fluctuating mechanical forces.

Large Lamellated Corpuscles of Vater-Paccini – Found on the ventral surfaces of the hand and foot, genitals, arm, neck, mammary papilla, periosteum, and near joints. They are ovoid, spherical and spiral and each has a capsule (30 lamellae), an intermediate growth zone and a central core (60 lamellae) that contains an axon terminal. Each corpuscle is supplied by one or, rarely, two myelinated fibers (A alpha).

Tactile (Meissner) Corpuscles – Found in the dermal papillae of the hand and foot, anterior part of the forearm, lips, eyelid, and tongue. It has a cylindrical shape and has a connective tissue capsule and a central core with myelinated nerve fibers. They are rapidly adapting mechanoreceptors, providing information about rapidly fluctuating mechanical forces. 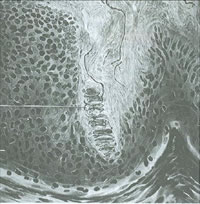 Large Lamellated Corpuscles of Vater-Paccini – Found on the ventral surfaces of the hand and foot, genitals, arm, neck, mammary papilla, periosteum, and near joints. They are ovoid, spherical and spiral and each has a capsule (30 lamellae), an intermediate growth zone and a central core (60 lamellae) that contains an axon terminal. Each corpuscle is supplied by one or, rarely, two myelinated fibers (A alpha).

This fiber loses the myelin sheath and at the junction with the heartwood loses the Schwann cell. They are very rapidly adapting mechanoceptors, responding only to sudden disturbances and especially sensitive to vibration. They can reach a length of 1 to 4 mm, visible to the naked eye, as oval white bodies. When cut, microscopically, it looks like an onion.

Special Skin Arrangements – Arrangements that report the mechanical and thermal state of the body's surface, including noxious stimuli.

They are subdivided into: mechanoceptors, thermoceptors and nociceptors. The activity of isolated sensory nerve fibers is activated only by certain types of stimuli applied to the area of the skin that it innervates, which shows its high degree of specificity, making a close correlation between morphology and function difficult. 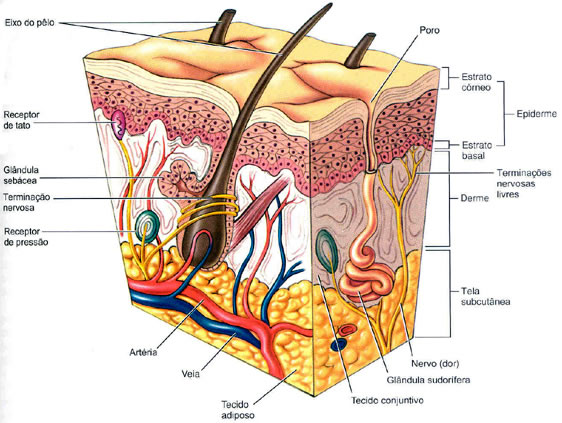 Summary diagram of sensory receptors found in the skin :