The telencephalon comprises the two cerebral hemispheres, right and left, and a small midline located in the anterior portion of the third ventricle.

The two cerebral hemispheres are incompletely separated by the longitudinal fissure of the brain, whose floor is formed by a wide band of commissural fibers, called corpus callosum, the main means of union between the two hemispheres. The hemispheres have cavities, the right and left lateral ventricles, which communicate with the third ventricle through the interventricular foramina. 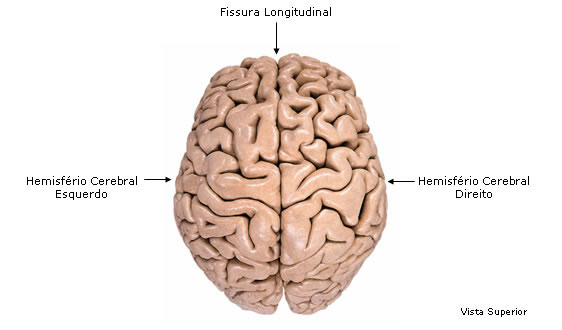 Each hemisphere has three poles : Frontal, Occipital and Temporal ; and three faces : Superolateral (convex); Medial (flat); and Inferior or base of the brain (irregular), resting anteriorly on the anterior and middle floors of the skull base and posteriorly on the tent cerebellum.

During embryonic development, when the size of the brain increases rapidly, the gray matter of the cortex increases more rapidly than the underlying white matter. As a result, the cortical region curls and folds in on itself. Therefore, the surface of the brain of man and of several animals presents depressions called sulci, which delimit the cerebral gyri or convolutions. The existence of the sulci allows a considerable increase in brain volume and it is known that about two thirds of the area occupied by the cerebral cortex is “hidden” in the sulci.
In any hemisphere, the two most important sulci are the lateral sulcus and the central sulcus.

Lateral sulcus : it is the sulcus that separates the frontal lobe from the temporal lobe. It is subdivided into ascending, anterior and posterior. 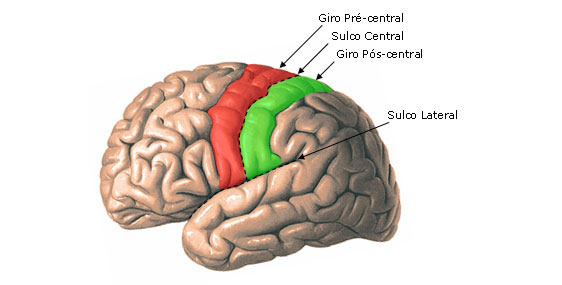 Another important sulcus located in the telencephalon, on the medial aspect, is the Parieto-occipital sulcus , which separates the parietal from the occipital lobe. 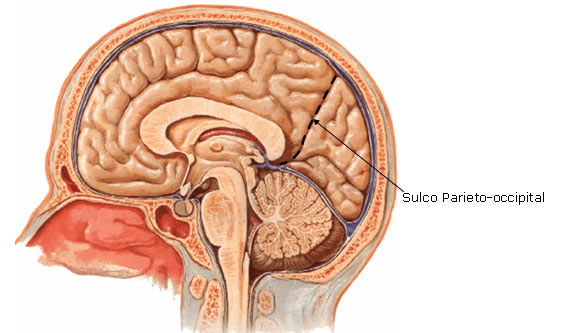 The cerebral lobes are named according to their location in relation to the bones of the skull. Therefore, we have five lobes : Frontal, Temporal, Parietal, Occipital and the Lobo of the Insula , which is the only one that does not relate to any bone in the skull, as it is situated deep in the lateral sulcus.

The division of the lobes does not correspond very much to a functional division, except for the occipital lobe which seems to be related only to vision.

The frontal lobe is located above the lateral sulcus and in front of the central sulcus. On the medial surface of the brain, the anterior limit of the occipital lobe is the parieto-occipital sulcus. On its superolateral surface, this limit is arbitrarily located on an imaginary line that joins the termination of the parieto-occipital sulcus, on the upper edge of the hemisphere, to the preoccipital notch, located on the inferolateral edge, about 4 cm. from the occipital pole. From the middle of this imaginary line departs a second imaginary line towards the posterior branch of the lateral sulcus and which, together with this branch, limits the temporal lobe of the parietal lobe. 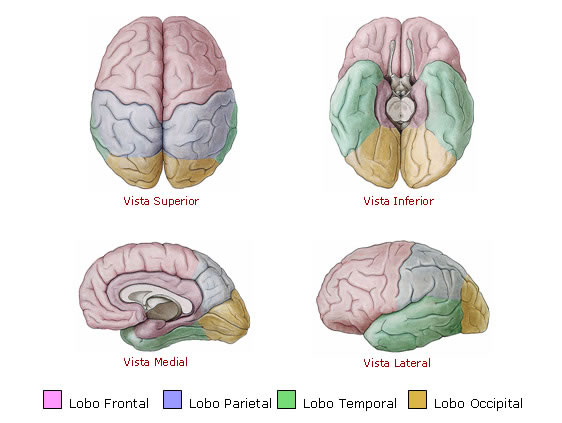 Unlike the other lobes, the parietal lobe has one gyrus and two lobes:
Postcentral gyrus: located between the central sulcus and the postcentral sulcus. It is in the postcentral gyrus that one of the most important sensory areas of the cortex, the somesthetic area, is located.
Superior Parietal Lobe: It is located superior to the intra-parietal sulcus.
Inferior Parietal Lobe: Located inferior to the intraparietal sulcus. In it, two gyri are described: the supramarginal gyrus, curving around the tip of the posterior branch of the lateral sulcus, and the angular gyrus, curving around the terminal and ascending portion of the superior temporal sulcus.

The occipital lobe occupies a relatively small portion of the superolateral surface of the brain, where it has small grooves and irregular and inconstant gyri. The main sulci and gyri of this lobe are visualized on the medial aspect of the brain.

Short Insula Gyres: They are located anterior to the central sulcus of the insula.

Fornix : emerging below the splenium of the corpus callosum and arching towards the anterior commissure is the fornix, a complex bundle of fibers which, however, cannot be seen in its entirety in a sagittal section of the brain. It consists of two lateral and symmetrical halves, spaced apart at the ends and joined together in the path of the corpus callosum. The intermediate portion where the two halves come together constitutes the body of the fornix and the extremities that separate are, respectively, the columns of the fornix (anterior) and the branches of the fornix (posterior). The fornix columns terminate in the corresponding mammillary body crossing the lateral wall of the III ventricle. The fornix branches diverge and penetrate on each side into the inferior horn of the lateral ventricle, where they attach to the hippocampus. At the point where the fornix legs separate, some fibers pass back and forth, forming the fornix commissure.

In the medial part of the brain , there are two grooves that pass from the frontal lobe to the parietal lobe: 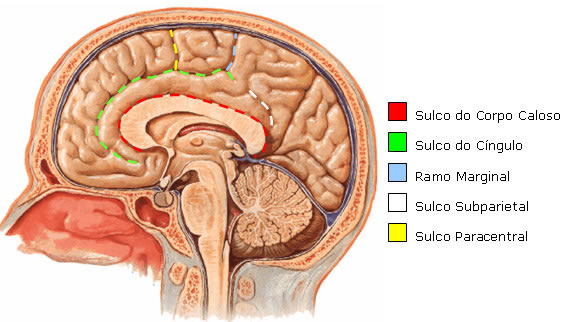 Cingular gyrus : It bypasses the corpus callosum, connecting to the parahippocampal gyrus through the isthmus of the cingulate gyrus. It is traversed by a bundle of fibers, the cingulate fasciculus.

Paracentral lobe : located between the marginal sulcus and the paracentral sulcus. In the anterior and posterior part of this lobe are located the motor and sensory areas related to the leg and foot.

Precuneus : It is located superior to the parieto-occipital sulcus, in the parietal lobe.

Superior Frontal Gyrus: already described above, in the study of the lateral face of the brain. 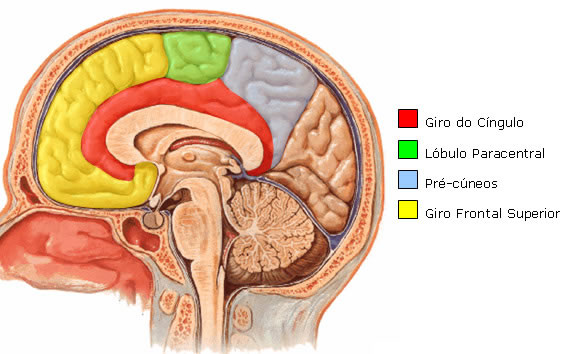 Calcarine sulcus : it starts below the splenium of the corpus callosum and has an arcuate course towards the occipital pole. The cortical center of vision is located on the lips of the calcarine sulcus.

Parieto-occipital sulcus : it is the sulcus that separates the occipital lobe from the parietal lobe. 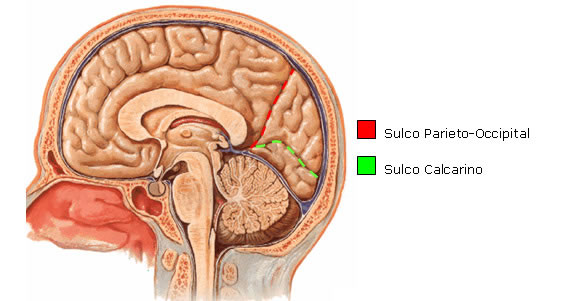 Cuneas : located between the parieto-occipital sulcus and the calcarine sulcus. It is a complex gyrus of triangular shape. In front of the cuneus, in the parietal lobe, we have the precuneus.

Medial Occipito-temporal gyrus : located below the calcarine sulcus. This gyrus continues anteriorly with the parahippocampal gyrus of the temporal lobe. 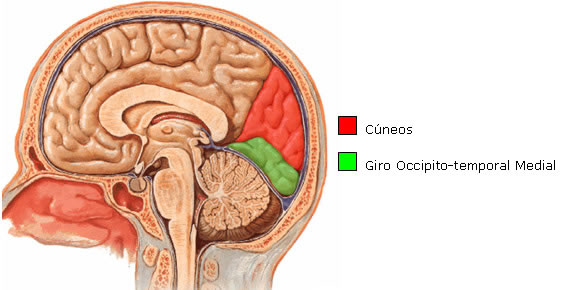 Collateral sulcus : starts near the occipital pole and runs forward. The collateral sulcus may be continuous with the renal sulcus, which separates the most anterior part of the parahippocampal gyrus from the rest of the temporal lobe.

Calcarine sulcus : best visualized on the medial surface of the brain. On the inferior surface, the posterior portion separates the parahippocampal gyrus from the isthmus of the cingulate gyrus. 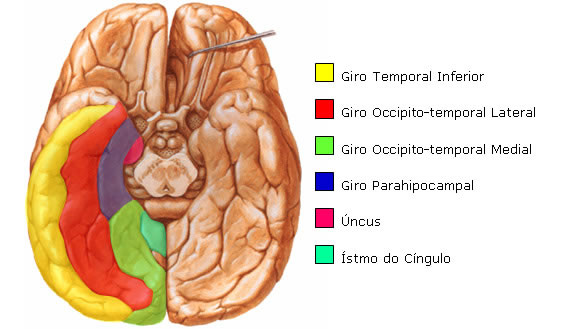 The inferior surface of the frontal lobe presents the following structures: the olfactory sulcus , deep and of anteroposterior direction; the rectus gyrus , which lies medial to the olfactory sulcus and continues dorsally as the superior frontal gyrus. The rest of the lower surface of the frontal lobe is occupied by very irregular sulci and gyri, the orbital sulci and gyri. 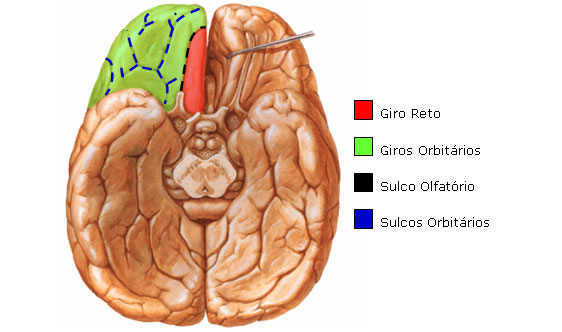 Morphology of the Lateral Ventricles :

The cerebral hemispheres have cavities lined with ependyma and containing cerebrospinal fluid, the left and right lateral ventricles, which communicate with the third ventricle through the interventricular foramen. Except for the foramen, each ventricle is a closed cavity that has a central part and three horns that correspond to the three poles of the cerebral hemisphere. The parts that project to the frontal, occipital, and temporal poles, respectively, are the anterior, posterior, and inferior horns. With the exception of the inferior horn, all parts of the lateral ventricle have a roof formed by the corpus callosum.

Internal Organization of the Cerebral Hemispheres:

The Projection Fibers are arranged in two bundles: the fornix and the internal capsule.

The fornix joins the hippocampus cortex to the mammillary body and contributes a little to the formation of the medullary white center. It has been better described earlier on this page.

The Internal Capsule contains the vast majority of fibers that leave or enter the cerebral cortex. These fibers form a compact bundle that separates the lentiform nucleus, located laterally, from the caudate nucleus and thalamus, located medially. Above the level of these nuclei, the fibers of the internal capsule form the corona radiata. 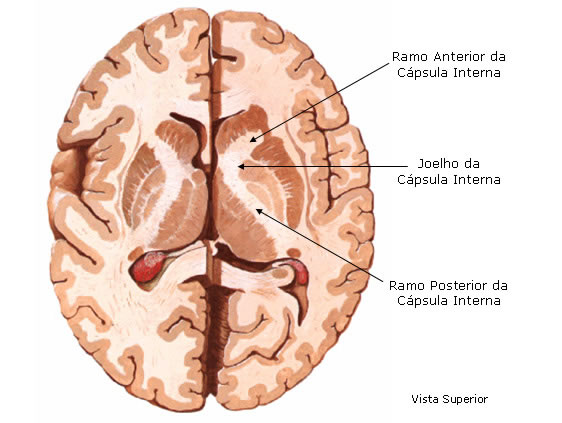 Among the Intra-hemispheric Association Fibers , I will cite the four most important issues:

Superior Longitudinal Fasciculus – Unites the frontal, parietal, and occipital lobes. It may also be called an arcuate fasciculus. 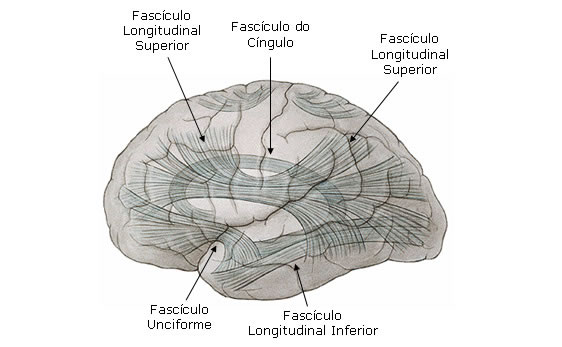 Among the Interhemispheric Association Fibers , that is, those that cross the median plane to unite symmetrical areas of the two hemispheres, we find three telencephalic commissures: Corpus Callosum, Commissure of the Fornix and Anterior Commissure , already studied above. 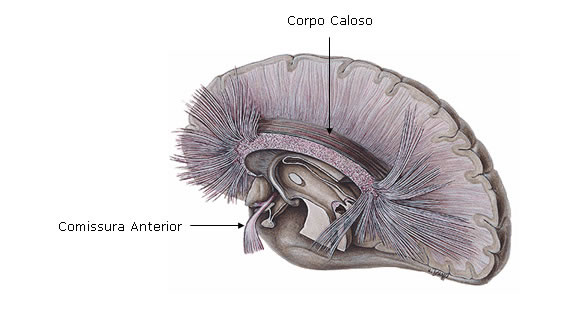 Lentiform Nucleus : It has the approximate shape and size of a Brazil nut. It does not appear on the ventricular surface, lying deep within the hemisphere. Medially it is related to the internal capsule, which separates it from the caudate nucleus and the thalamus; laterally it relates to the cortex of the insula, from which it is separated by white matter and the claustrum.
The lentiform nucleus is divided into the putamen and globus pallidus by a thin sheet of white matter, the lateral medullary lamina. The putamen lies laterally and is larger than the globus pallidus, which are disposed medially. In cross-sections of the brain, the globus pallidus is lighter in color than the putamen because of the presence of myelinated fibers running through it. The globus pallidus is subdivided by a lamina of white matter, the medial medullary lamina, into external and internal parts (see figure below).

Amygdaloid Body : It is a spheroid mass of gray matter about 2 cm in diameter located in the temporal pole of the cerebral hemisphere. It makes a slight bulge in the roof of the terminal part of the inferior horn of the lateral ventricle. The amygdaloid body is part of the limbic system and is an important regulator of sexual behavior and aggression (see figure above).

Accumbens nucleus : mass of gray matter located in the junction between the putamen and the head of the caudate nucleus.

Meynert's basal nucleus : difficult to see macroscopically. It is located at the base of the brain, between the anterior perforated substance and the globus pallidus, a region known as the substantia innominata. Contains large neurons rich in acetylcholine.

At the end of this content, I would like to illustrate an image with some important areas considering the telencephalon as a whole. As stated before, the division by lobes and sulci is just didactic, as the brain works as a whole independent of the lobes, but some areas are specific and well located, such as those indicated in the figure below: 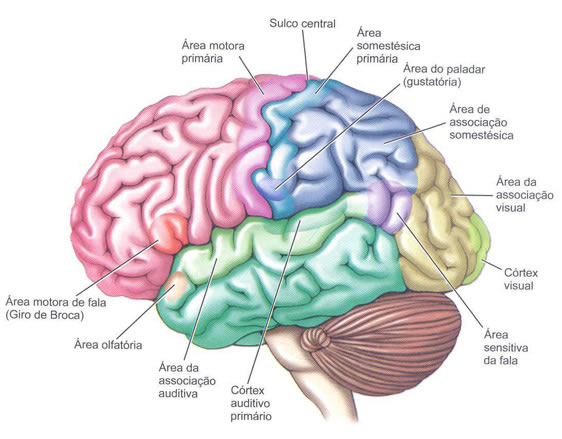