The vertebral column, also called the backbone, extends from the skull to the pelvis. It accounts for two-fifths of total body weight and is made up of connective tissue and a series of bones, called vertebrae, which are superimposed in the form of a column, hence the term spinal column. The vertebral column is made up of 24 vertebrae + sacrum + coccyx and forms, along with the head, sternum and ribs, the axial skeleton.

The spine is divided into four regions: Cervical , Thoracic , Lumbar and Sacro-Coccygeal .

There are 7 cervical, 12 thoracic, 5 lumbar, 5 sacral and about 4 coccygeal vertebrae .

Curvatures of the Vertebral Column

In a side view, the spine presents several curvatures considered physiological.

When one of these curvatures is increased, we call it HYPERCYPHOSIS (dorsal and pelvic region) or HYPERLORDOSIS (cervical and lumbar region).

In an anterior or posterior view, the spine does not show any curvature. When any curvature occurs in this plane we call it SCOLIOSIS . 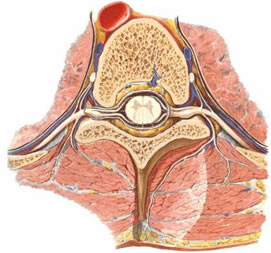 The spinal canal follows the different curves of the spine. It is large and triangular in regions where the spine has greater mobility (cervical and lumbar) and is small and round in the region that does not have much mobility (thoracic).
In the image to the side (top view of the spine), we can see the spinal canal. It is formed by the junction of the vertebrae and serves to protect the spinal cord. In addition to the spinal canal, the spinal cord is also protected by the meninges, the cerebrospinal fluid and the blood-brain barrier.

The vertebrae can be studied under three aspects: general, regional and individual characteristics.

Between the bodies of two adjacent vertebrae from the second cervical vertebra to the sacrum, there are intervertebral discs. 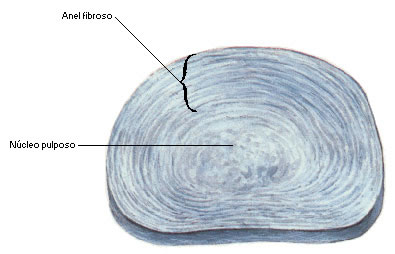 skull as a whole