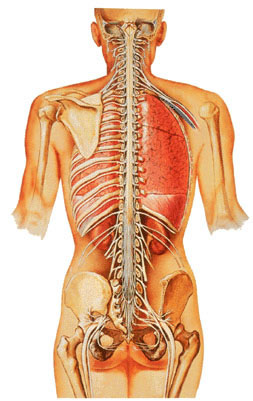 Medulla means brain and indicates what is inside. So we have the spinal cord inside the bones, more precisely inside the vertebral canal.

The spinal cord is a cylindrical mass of nervous tissue situated within the spinal canal without, however, occupying it completely. In the adult male it measures approximately 45 cm being a little smaller in the female.
Cranially, the medulla is limited to the medulla, approximately at the level of the foramen magnum of the occipital bone. The caudal limit of the medulla is of clinical importance and in adults it is usually located at L2.
The medulla ends by tapering to form a cone, the conus medullaris, which continues with a thin meningeal filament, the terminal filament.

The spinal cord has an approximate shape of a cylinder, flattened in the anteroposterior direction. Its caliber is not uniform, as it has two dilatations called cervical swelling and lumbar swelling.

These spinal cord swellings correspond to the areas where they connect with the thick nerve roots that form the brachial and lumbosacral plexus, intended for the innervation of the upper and lower limbs. 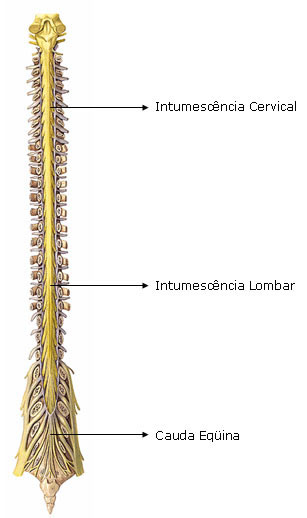 The formation of these swellings is due to the greater number of neurons and, therefore, of nerve fibers that enter or leave these areas.

In the medulla, the gray matter is located inside the white and has the shape of a butterfly, or an “H”. In it we distinguish, on each side, three columns that appear in the cuts as horns and that are the anterior, posterior and lateral columns. The lateral column only appears in the thoracic cord and part of the lumbar cord. In the center of the gray matter is the central canal of the spinal cord.

The white matter is formed by fibers, most of them myelinated, that ascend and descend in the medulla and that can be grouped on each side in three funiculi or cords:

There are 31 pairs of spinal nerves to which correspond 31 spinal segments distributed as follows :

We found 8 pairs of cervical nerves and only 7 cervical vertebrae because the first pair of spinal nerves exits between the occipital and C1.

At a level below the second lumbar vertebra we find only the meninges and the nerve roots of the last spinal nerves, which, arranged around the conus medullaris and terminal filament, together constitute the so-called cauda equina.

As the nerve roots maintain their relationship with their respective intervertebral foramina, there is an elongation of the roots and a decrease in the angle they make with the spinal cord. These phenomena are more pronounced in the caudal part of the medulla, leading to the formation of the cauda equina.

Still as a consequence of the difference in growth rates between the spine and the spinal cord, we have the separation of the spinal segments of the corresponding vertebrae. Thus, in the adult, the T11 and T12 vertebrae correspond to the lumbar segments. To find out which spinal cord level each vertebra corresponds to, we have the following rule: between levels C2 and T10, we add the number two to the spinous process of the vertebra and if it has the underlying spinal segment. The spinous processes of T11 and T12 correspond to the five lumbar segments, while the spinous process of L1 corresponds to the five sacral segments.

The spinal cord is surrounded by fibrous membranes called meninges, which are: Dura mater, Arachnoid and Pi mater.

The Dura mater is the thickest and envelops the entire medulla, like a glove, the dural sac. Cranially it continues into the cranial dura mater, caudally it ends in a cul-de-sac at the level of the S2 vertebra. Lateral extensions of the dura mater sheath the roots of the spinal nerves, constituting a connective tissue (epineuro), which surrounds the nerves.

The spinal arachnoid is arranged between the dura mater and the pia mater. It comprises a leaflet juxtaposed to the dura mater and a tangle of arachnoid trabeculae, which unite this leaflet to the pia mater.
The Pia mater is the most delicate and innermost membrane. It intimately adheres to the surface tissue of the medulla and penetrates the anterior median fissure. When the medulla ends at the conus medullaris, the pia mater continues caudally, forming a whitish filament called the terminal filament.

This filament pierces the dural cul-de-sac and continues to the sacral hiatus. When crossing the dural sac, the terminal filament receives several extensions of the dura mater and the whole is called the dura mater filament. This, when inserted into the periosteum of the dorsal surface of the coccyx, constitutes the coccygeal ligament. The pia mater forms, on each side of the spinal cord, a longitudinal fold called the denticulate ligament, which is arranged in a frontal plane along the entire length of the spinal cord.

The medial border of each ligament continues with the pia mater of the lateral aspect of the medulla along a continuous line that runs between the dorsal and ventral roots. The lateral margin has about 21 triangular processes that insert firmly into the arachnoid and dura mater at a point that change with the emergence of spinal nerves. The two denticulated ligaments are elements of spinal cord fixation and important reference points in surgeries of this organ. 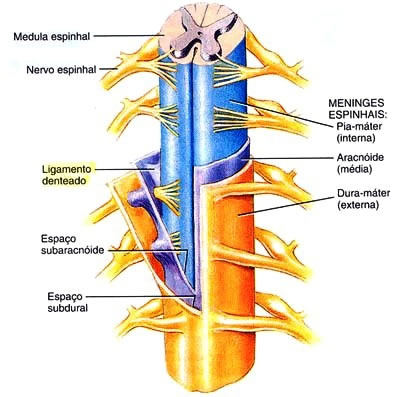 There are spaces between the meninges that are important for the medical clinic due to the pathologies that may be involved with these structures, such as: extradural hematoma, meningitis, etc. The epidural, or extradural, space lies between the dura mater and the periosteum of the spinal canal.

It contains fatty tissue and a large number of veins that make up the internal vertebral venous plexus. The subdural space, situated between the dura and the arachnoid, is a narrow cleft containing a small amount of fluid. The subarachnoid space contains a fairly large amount of cerebrospinal fluid or CSF. Some authors still consider another space called subpial, located between the pia mater and the nervous tissue.