It consists of tubes called veins that carry blood from the capillaries to the heart. Veins, as well as arteries, belong to the large and small circulations.

Some important veins of the human body:

Pulmonary circulation veins (or small circulation) : The veins that carry the blood that returns from the lungs to the heart after undergoing hematosis (oxygenation), are called pulmonary veins.

The four pulmonary veins will empty into the left atrium. These veins are formed by the segmental veins that collect arterial blood from the pulmonary segments.

Superior Vena Cava: The superior vena cava is about 7.5 cm long and 2 cm in diameter and originates from the two brachiocephalic trunks (or right and left brachiocephalic vein). 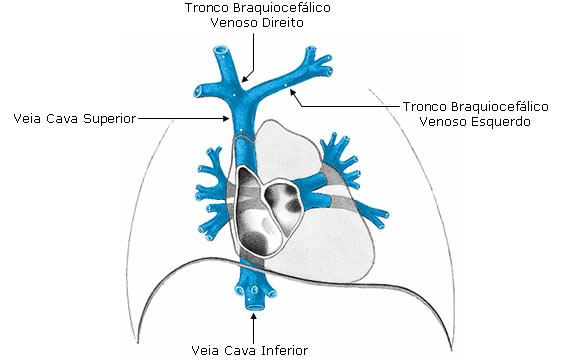 Inferior vena cava: the inferior vena cava is the largest vein in the body, with a diameter of about 3.5 cm and is formed by the two common iliac veins that collect blood from the pelvic region and lower limbs. 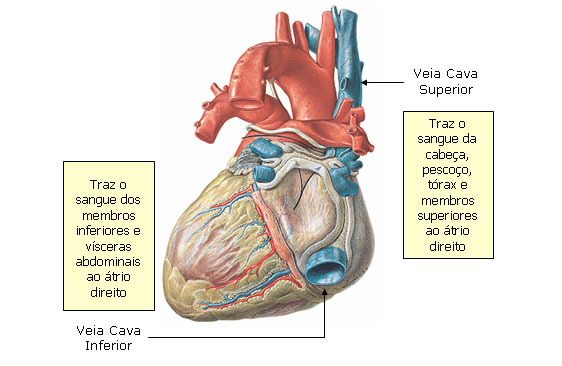 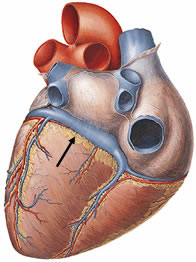 Coronary Sinus and Cardiac Veins:
The coronary sinus is the main vein of the heart. It receives almost all of the venous blood from the myocardium. It is located in the coronary sulcus opening into the right atrium. It is a wide venous channel into which the veins drain. It receives the magma cardiac vein (anterior interventricular sulcus) at its left end, the middle cardiac vein (posterior interventricular sulcus) and the small cardiac vein at its right end. Several anterior cardiac veins drain directly into the right atrium.

VEINS OF THE HEAD AND NECK 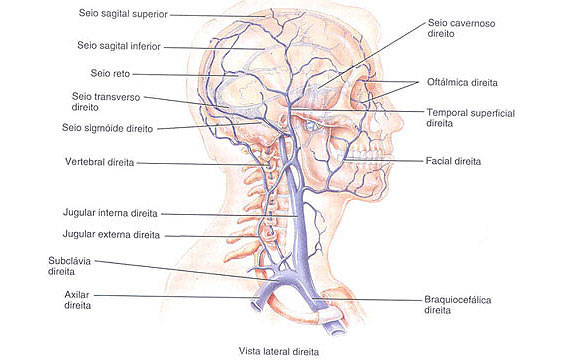 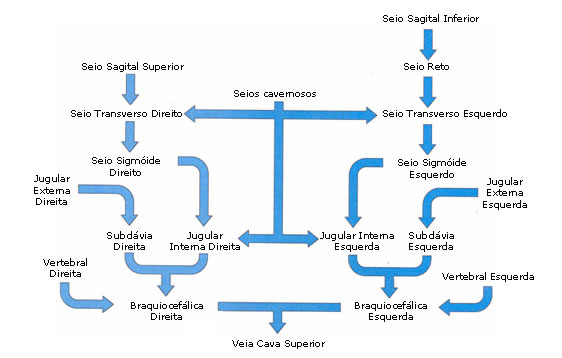 Skull : The venous network inside the skull is represented by a system of intercommunicating channels called the sinuses of the dura mater.

They are true tunnels excavated in the dura mater membrane. This is the outermost membrane of the meninges.

These channels are lined by endothelium.

The dura mater sinuses can be divided into six odd and seven pairs.

ODD SINUS (6): three are related to the cranial calvaria and three to the base of the skull.

1 – Superior Sagittal Sinus: It is located on the upper border and follows the falx cerebri in its entirety.

2 – Inferior Sagittal Sinus: occupies the posterior two thirds of the inferior border of the free part of the falx cerebri.

3 – Straight Sinus: located at the junction of the falx cerebri and the tent of the cerebellum.

Anteriorly it receives the inferior sagittal sinus and the great vein of the brain (which is formed by the internal veins of the brain) and posteriorly empties into the confluence of the sinuses.

1 – Anterior Intercavenous Sinus: Transversely connects the two cavernous sinuses. Situated in the upper part of the sella turcica, passing in front of and over the pituitary.

2 – Posterior Intercavernous Sinus : parallel to the previous one, it connects the two cavernous sinuses, passing behind and above the pituitary.

3 – Basilar Plexus: it is a plexus of venous channels that is located in the clivus of the occiput.

This plexus empties into the posterior intercavernous and inferior petrosal sinuses (right and left).

EVEN SINUS : They are situated at the base of the skull.

1 – Sphenoparietal sinus: occupies the posterior border of the lesser wing of the sphenoid bone.

2 – Cavernous Sinus: arranged in the anteroposterior direction, it occupies each side of the sella turcica.

It receives anteriorly the ophthalmic vein, the deep middle cerebral vein and the sphenoparietal sinus and, posteriorly, it continues with the superior and inferior petrosal sinuses.

3 – Superior Petrosal Sinus: it extends from the cavernous sinus to the transverse sinus, it is located on the upper border of the petrous part of the temporal.

4 – Inferior petrosal sinus: it originates at the posterior end of the cavernous sinus, receives part of the basilar plexus, ending in the superior bulb of the internal jugular vein.

5 – Transverse Sinus : it originates at the confluence of the sinuses and runs along the transverse sulcus of the occipital bone, up to the petrous base of the temporal, where it receives the superior petrous sinus and continues with the sigmoid sinus.

6 – Sigmoid Sinus: occupies the sulcus of the same name, which forms a true “S” on the posterior border of the petrous part of the temporal, ending in the superior bulb of the internal jugular vein, after crossing the jugular foramen.

The internal jugular vein continues to the sigmoid sinus, and the inferior petrosal sinus crosses the jugular foramen to empty into that vein.

7 – Occipital sinus: originates near the foramen magnum and is located on either side of the posterior border of the falx cerebellum.

It later ends at the confluence of the sinuses at the level of the internal occipital protuberance.

Face : Normally, the superior thyroid, lingual, facial and pharyngeal veins anastomose forming a common trunk that will empty into the internal jugular vein.

The pterygoid plexus collects blood from the territory vascularized by the maxillary artery, including all teeth, maintaining anastomosis with the facial vein and the cavernous sinus.

The various branches of the pterygoid plexus anastomose with the superficial temporal vein to form the retromandibular vein.

This retromandibular vein that will unite with the posterior auricular vein to give rise to the external jugular vein.

The orbital cavity is drained by the superior and inferior ophthalmic veins that empty into the cavernous sinus.

The superior ophthalmic vein maintains anastomosis with the beginning of the facial vein.

Neck : Going down the neck, we find four pairs of jugular veins. These jugular veins are called internal, external, anterior and posterior.

Internal Jugular Vein: It will anastomoses with the subclavian vein to form the venous brachiocephalic trunk.

Anterior Jugular Vein: it originates superficially at the level of the suprahyoid region and ends at the termination of the external jugular vein.

Posterior Jugular Vein: it originates near the occipital vein and descends posteriorly to the neck to empty into the venous brachiocephalic trunk. It is situated deep. 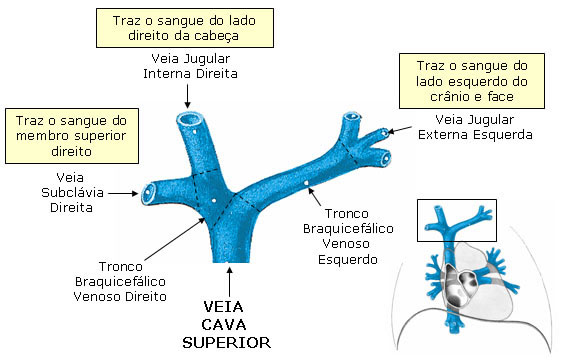 VEINS OF THE THORAX AND ABDOMEN

– The first refers to the coronary sinus that opens directly into the right atrium.

– The second different venous arrangement is the azygos system.

The veins of the azygos system collect most of the venous blood from the walls of the chest and abdomen. From the abdomen venous blood ascends through the ascending lumbar veins; of the thorax is collected mainly by all posterior intercostal veins.

The azygos system forms a true “H” in front of the vertebral bodies of the thoracic portion of the spine.

The right vertical branch of the “H” is called the azygos vein.

The left vertical branch is subdivided by the horizontal branch into two segments, an upper and a lower one.

The horizontal branch is anastomotic, connecting the two segments of the left branch with the right vertical branch.

Finally, the azygos vein will empty into the superior vena cava.

Abdomen : In the abdomen, there is a very important venous system that collects blood from the abdominal viscera to transport it to the liver. It's the portal vein system.

The portal vein is formed by the anastomosis of the splenic vein (collects blood from the spleen) with the superior mesenteric vein.

Once constituted, the portal vein also receives the left gastric and prepyloric veins.

Upon reaching the hepatic hilum, the portal vein bifurcates into two branches (right and left), thus penetrating the liver.

Inside the liver, the branches of the portal vein form a true network.

They will branch into venules of smaller and smaller caliber until capillarization.

Then, the capillaries form venules again, which successively unite to form the hepatic veins, which flow into the inferior vena cava.

The right side gonodal vein drains at an acute angle into the inferior vena cava, while the left side drains perpendicularly into the renal vein.

SUMMARY THE HEPATIC PORTAL SYSTEM : The portal hepatic circulation diverts venous blood from the gastrointestinal organs and spleen to the liver before returning to the heart. The hepatic portal vein is formed by the union of the superior mesenteric and splenic veins. The superior mesenteric vein drains blood from the small intestine and parts of the large intestine, stomach, and pancreas. The splenic vein drains blood from the stomach, pancreas, and parts of the large intestine. The inferior mesenteric vein, which empties into the splenic vein, drains parts of the large intestine. The liver receives arterial (proper hepatic artery) and venous (hepatic portal vein) blood at the same time. Finally, all the blood leaves the liver through the hepatic veins that empty into the inferior vena cava.

VEINS OF THE UPPER MEMBERS 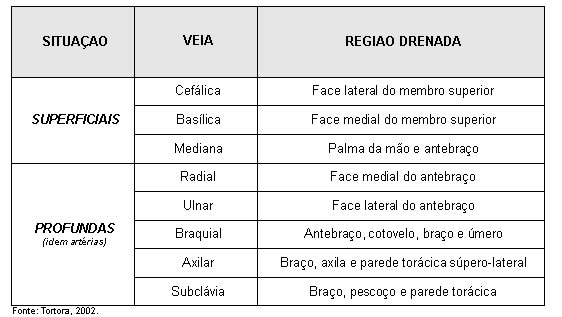 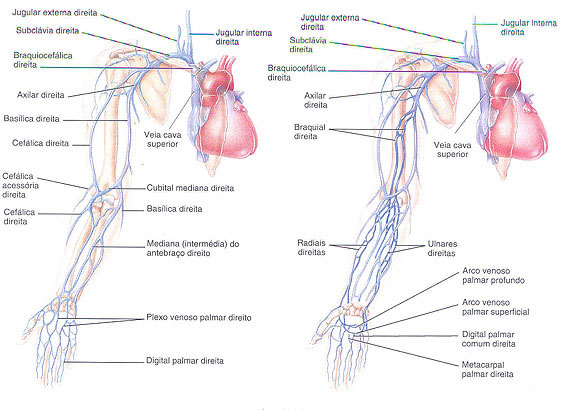 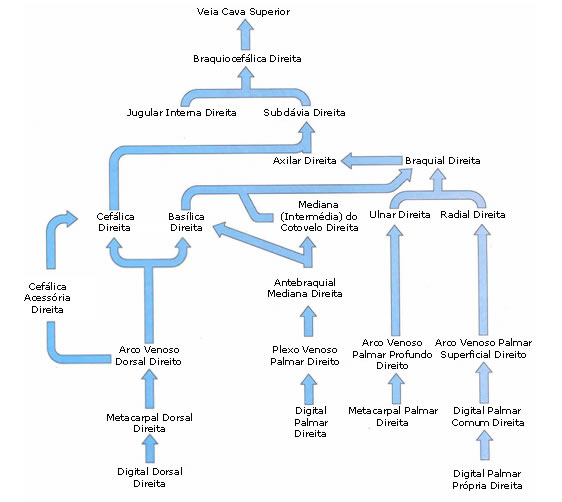 The superficial veins of the upper limbs:

The cephalic vein originates from the network of venules in the lateral half of the hand region. In its ascending course, it passes to the anterior surface of the forearm, which runs along the radial side, ascends the arm where it occupies the lateral bicipital sulcus and then the deltopectoral sulcus, and then deepens, perforating the fascia, to empty into the axillary vein.

The basilic vein originates from the network of venules in the medial half of the dorsal region of the hand. Upon reaching the forearm, it passes to the anterior surface, which rises from the ulnar side. In the arm, it travels through the medial bicipital groove to the middle of the superior segment, when it deepens and pierces the fascia, to empty into the medial brachial vein.

The median forearm vein begins with the venules of the palmar region and ascends along the anterior surface of the forearm, parallel to and between the cephalic and basilic veins.

VEINS OF THE LOWER LIMBS 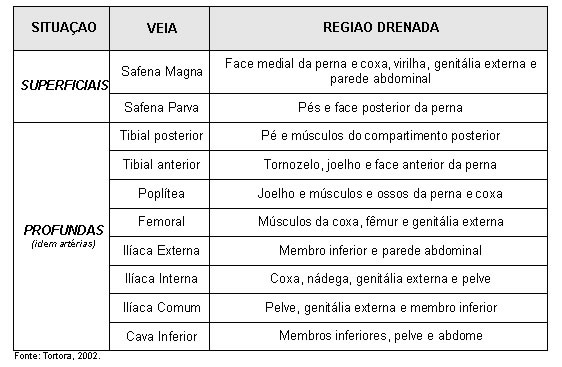 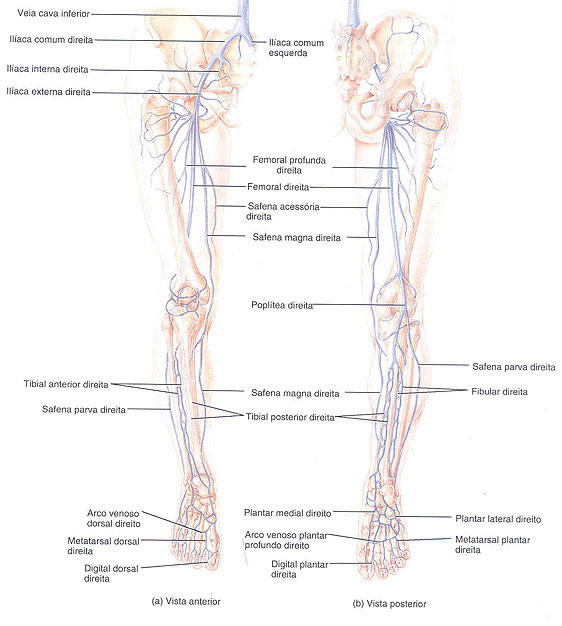 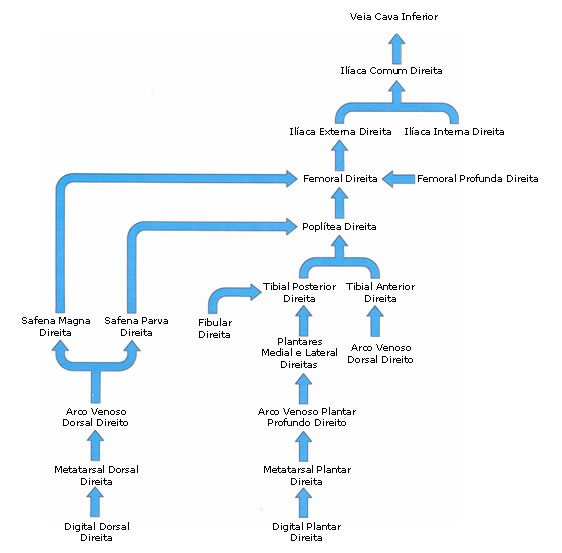 The Superficial Veins of the Lower Limbs :

Greater Saphenous Vein: It originates in the network of venules in the dorsal region of the foot, bordering the medial border of this region, passes between the medial malleolus and the tendon of the tibialis anterior muscle and ascends the medial aspect of the leg and thigh.

Near the root of the thigh it curves to deepen and passes through a hole in the fascia lata called the saphenous hiatus.

The Small Saphenous Vein: It originates in the region of venules on the lateral margin of the dorsal region of the foot, passes behind the lateral malleolus and ascends through the midline of the posterior aspect of the leg to the proximity of the knee flexion crease, where it deepens. to flow into one of the popliteal veins.