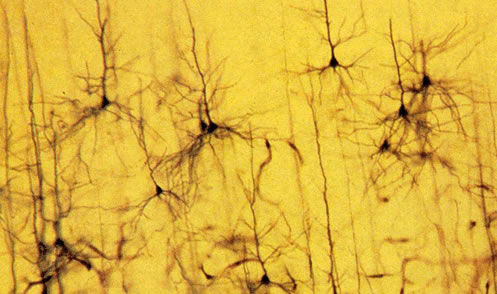 Neuron: It is the structural and functional unit of the nervous system that is specialized for rapid communication. It has the basic function of receiving, processing and sending information.

Glia Cells : comprises the cells that occupy the spaces between neurons and have the function of support, coating or isolation and modulation of neural activity.

Neurons: These are cells that are highly 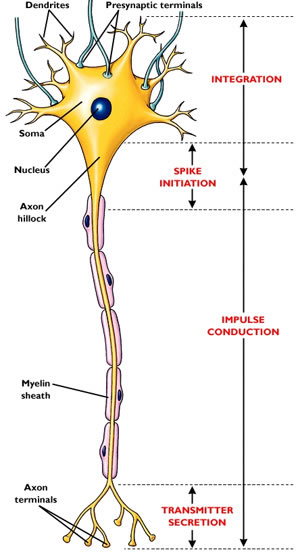 excitable cells that communicate with each other or with other effector cells, basically using electrical language. Most neurons have three regions responsible for specialized functions: cell body, dendrites, and axons.

The Cell Body: It is the metabolic center of the neuron, responsible for the synthesis of all neuronal proteins. The shape and size of the cell body are extremely variable, depending on the type of neuron. The cell body is also, together with the dendrites, the site of reception of stimuli, through synaptic contacts.

Dendrites: they are usually short and branch profusely, like tree branches, at acute angles, giving rise to dendrites of smaller diameter. These are the processes or projections that transmit impulses to the cell bodies of neurons or to axons.
In general, dendrites are unmyelinated. A neuron can have thousands of dendrites. Therefore, dendrites are specialized to receive stimuli.

Axons: The vast majority of neurons have an axon, a long, thin process that originates from the cell body or a main dendrite. The axon has a very variable length, ranging from a few millimeters to more than a meter. These are the processes that transmit impulses that leave the cell bodies of neurons, or dendrites. The terminal portion of the axon undergoes several ramifications to form hundreds to thousands of axon terminals, within which chemical neurotransmitters are stored. Therefore, the axon is specialized to generate and conduct the action potential.

There are three types of neurons: Sensory, Motor and Interneuron .

A Sensory Neuron carries information from the periphery towards the CNS, which is also called an afferent neuron.

A Motor Neuron conducts information from the CNS towards the periphery, being known as an efferent neuron. Sensory and motor neurons are found in both the CNS and the PNS.

Neuron Interneurons are those that connect one neuron to another, being found in the CNS.

Sensory Function: the sensory nerves capture information from the internal and external environment of the body and carry it to the CNS;

Integrating Function: the sensitive information brought to the CNS is processed or interpreted; 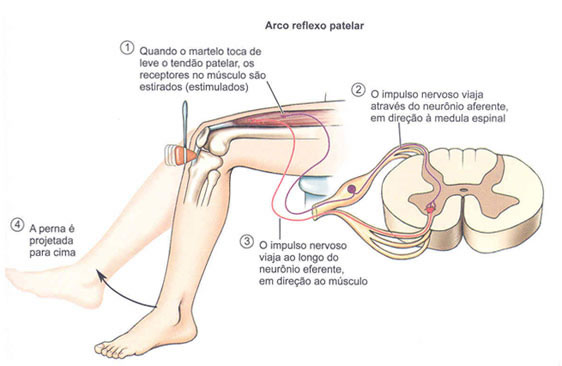 Classification of the neuron according to its processes : most neurons have several dendrites and one axon, so they are called multipolar. But there are also bipolar and pseudo-unipolar neurons.

In bipolar neurons, two processes leave the cell body, a dendrite and an axon.

In pseudounipolar neurons, only one extension leaves the cell body. 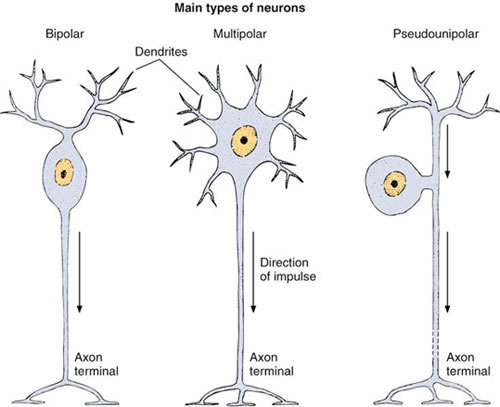 Synapses: Neurons, mainly through their axon endings, come into contact with other neurons, passing on information to them. The locations of such contacts are called synapses. That is, neurons communicate with each other at synapses – contact points between neurons, where we find synaptic vesicles, where neurotransmitters are stored. Communication occurs through neurotransmitters – chemical agents released or secreted by a neuron. The most common neurotransmitters are acetylcholine and norepinephrine. Other CNS neurotransmitters include epinephrine, serotonin, GABA and endorphins. 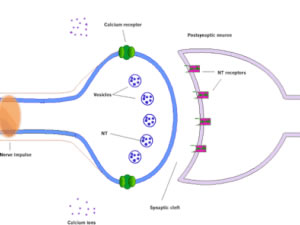 Nerve Fibers: A nerve fiber comprises an axon and, when present, its sheath of glial origin. The main envelope of nerve fibers is the myelin sheath (layers of lipid and protein substances), which functions as electrical insulation. When surrounded by a myelin sheath, axons are called myelin nerve fibers. In the absence of myelin, the fibers are called unmyelinated. Both types occur in the central nervous system and in the peripheral nervous system, with the myelin sheath formed by Schwann cells, in the peripheral and central by oligodendrocytes. The myelin sheath allows a faster conduction of the nerve impulse and, along the axons, the conduction is of the saltatory type, that is, the action potential only occurs in structures called nodes of Ranvier.

Nerves: after leaving the brainstem, spinal cord or sensory ganglia, motor and sensory nerve fibers gather in bundles that are associated with conjunctive structures, constituting spinal and cranial nerves.

Facts about the Peripheral Nervous System

In the peripheral nervous system, the axon is surrounded by special cells called Schwann cells, which form the axon's myelin sheath. The nucleus and cytoplasm of Schwann cells lie outside the myelin sheath and constitute the neurilema. This structure is important in cases where the nerve is sectioned, as it is responsible, in part, for its regeneration. Thus, the surgically reconstructed nerves can eventually reestablish their connections, allowing the recovery of sensitivity and movements. 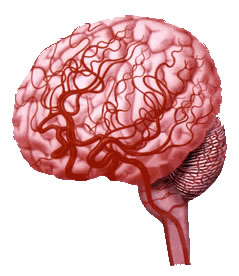 The brain weight of an adult male is 1,300 grams and in a female it is 1,200 grams. It is assumed that in an adult man of average height, the smallest brain compatible with normal intelligence would be 900 grams. Above this limit, attempts to correlate brain weight with the degree of intelligence come up against numerous exceptions (this refers to body weight and not to the degree of intelligence, as it has not yet been possible to prove which of the two sexes is more intelligent). Intelligence does not refer only to the amount of gray matter, but to the ability that human beings have to understand, reason, interpret and relate knowledge about lived and unlived experiences and the human being's adaptive capacity to new situations.