The Knee Complex is located in the transition between the thigh and the leg and is considered the most complex joint in the human body.

The Knee is primarily a ginglymus (hinge) type synovial joint.

In addition to all the structures contained in a synovial joint, the knee joint contains extra shock absorbers in the form of cartilage blocks.

The knee is the name given to a joint complex formed by: 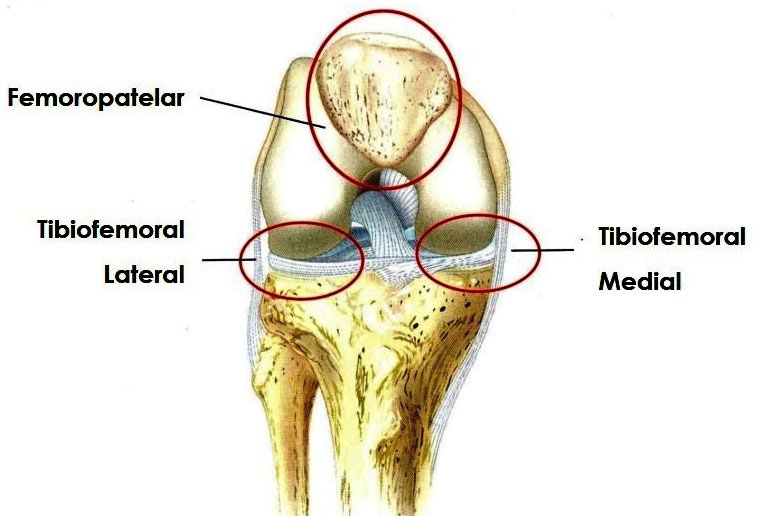 Articular Surfaces of the Knee Joint

The articular faces of the knee joint are characterized by their large size and their complicated and incongruous shapes. The femur slopes medially at the knee, while the tibia is nearly vertical.

The fibula is not involved in the knee joint.

The functional complex of the knee is mechanically relatively weak due to the configurations of its articular surfaces. Knee joint stability depends on:

– From the strength and actions of adjacent muscles and their tendons

– The ligaments that connect the femur and tibia

The joint capsule is a connective tissue that attaches to the bones involved in the joint, keeping them connected. In the case of the knee joint, it is reinforced by retinacula and ligaments.

The joint capsule is reinforced posteriorly by muscles and by the oblique and arcuate popliteal ligaments. Medially and laterally, the capsule begins proximally above the femoral condyles and continues distally to the margins of the tibial condyles. Collateral ligaments reinforce the capsule medially and laterally. Anteriorly, the patella, the quadriceps femoris tendon superiorly, and the patellar ligament inferiorly complete the anterior portion of the joint capsule. The anteromedial and anterolateral portions of the capsule are called the extensor retinaculum or medial and lateral patellar retinacula. 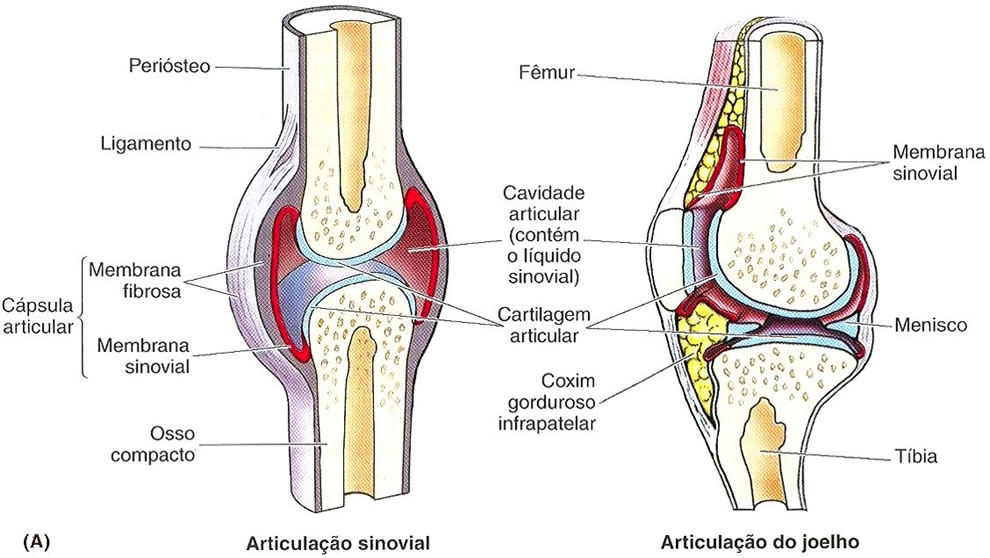 The main function of the synovial membrane is to produce and release synovial fluid into the joint cavity.

Synovial membrane secretes Synovial Fluid , which forms a thin layer on the surfaces inside the joint capsule. The liquid has a viscous, transparent or yellowish characteristic, it was so called because it has a similar appearance and consistency to raw egg whites.

Synovial fluid is made up of hyaluronic acid and interstitial fluid filtered from blood plasma. Its various functions include reducing friction by lubricating the joint, providing nutrients to the articular cartilage chondrocytes, and removing metabolic waste from them. Synovial fluid also contains phagocytic cells, which remove microorganisms and waste products from the wear and tear of joints. When the synovial joint is immobilized for a while, the fluid becomes more viscous, returning to its more fluid state with use of the joint. 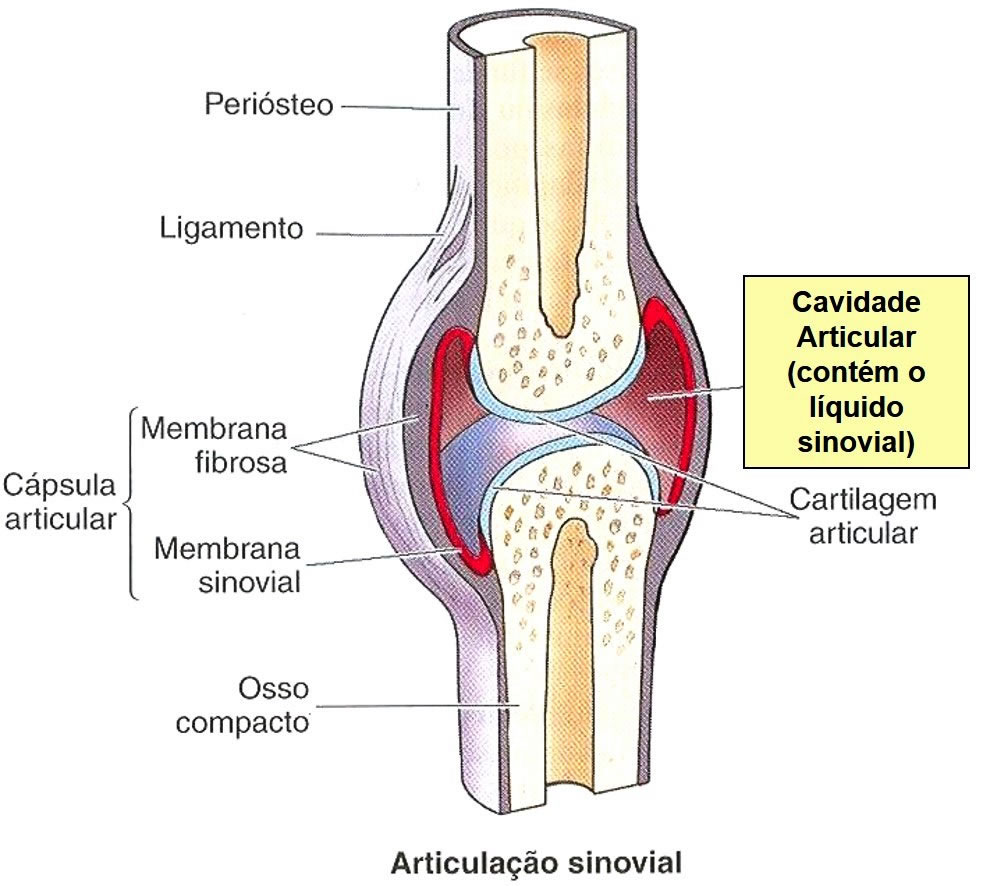 Next, we will present the ligaments and menisci, as a didactic way, we will divide them into 2 groups.

Extracapsular Ligaments of the Knee Joint

The fibrous capsule is reinforced by five extracapsular ligaments

It is the central portion of the quadriceps femoris tendon that continues from the patella to the tibial tuberosity. It is a strong, flat, ligamentous bundle about 8 cm long. 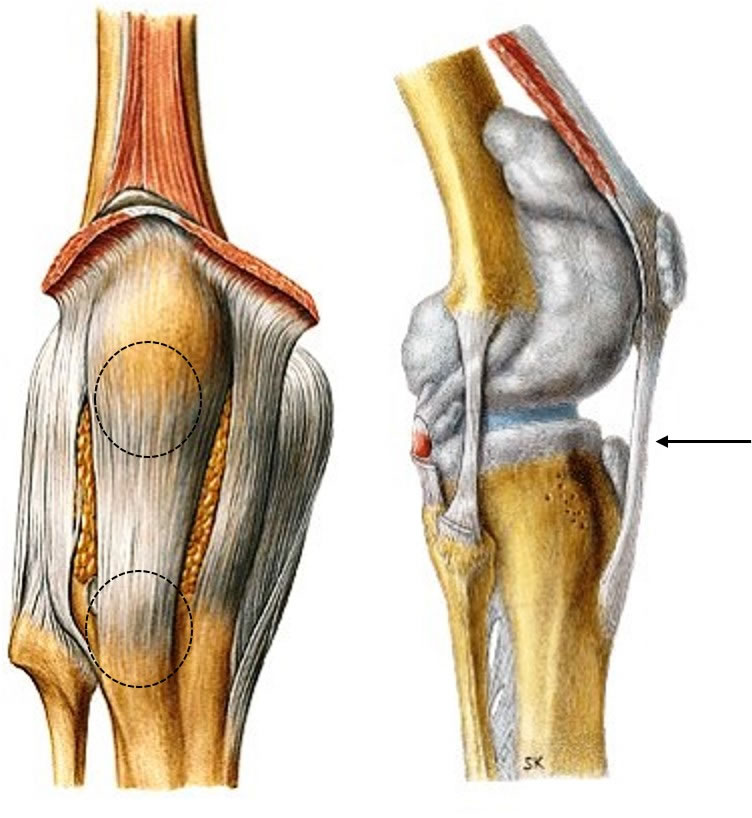 The patellar ligament is the anterior ligament of the knee joint, it fuses with the medial and lateral patellar retinacula, which are aponeurotic expansions of the vastus medialis and lateralis muscles and the overlying deep fascia. The retinacula support the knee joint capsule laterally. 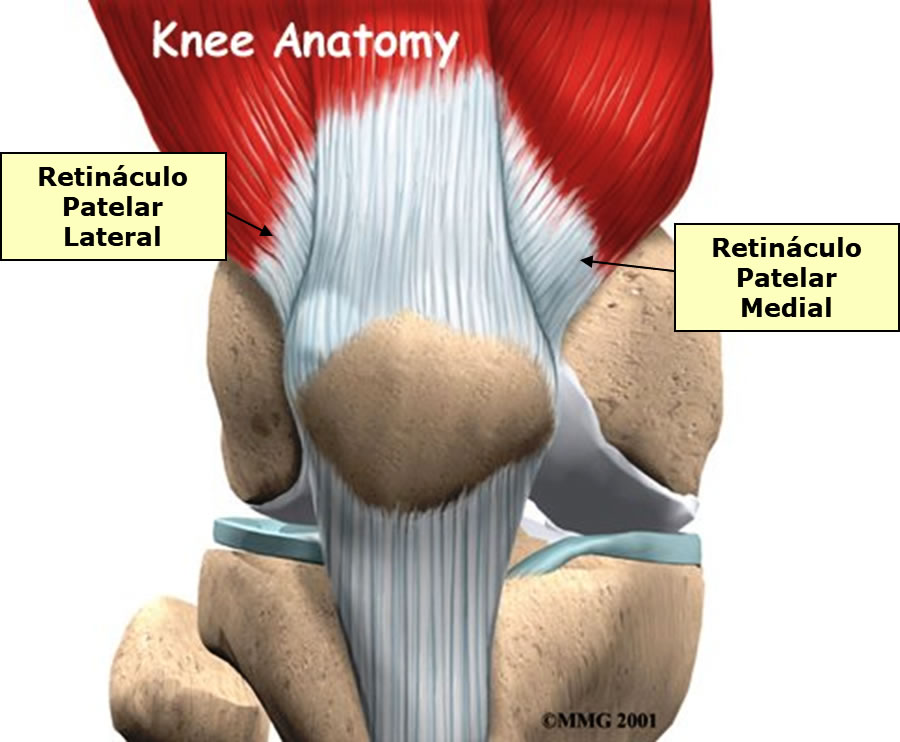 The posterior surface of the patellar ligament is separated from the synovial membrane by a large infrapatellar fat pad and from the tibia by a synovial pouch. 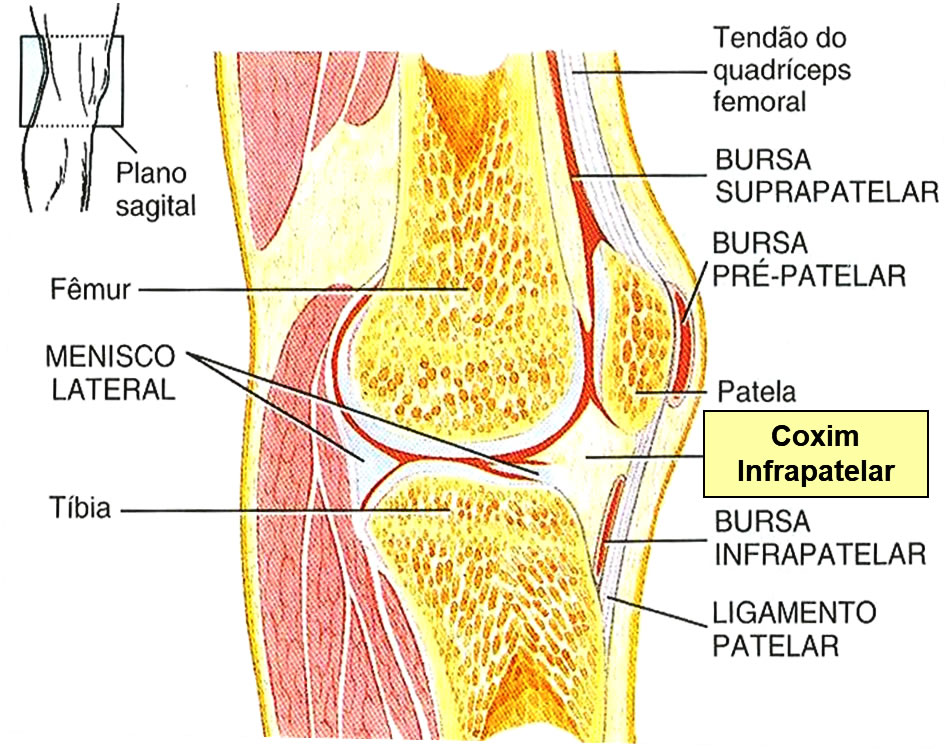 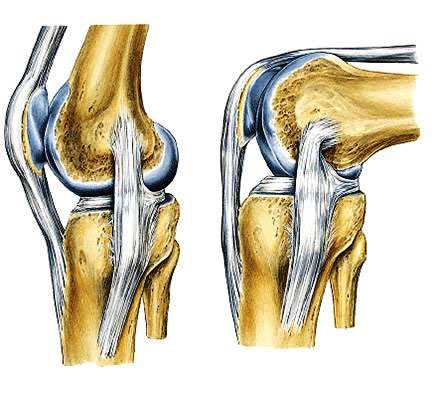 The Tibial Collateral Ligament has 2 planes: 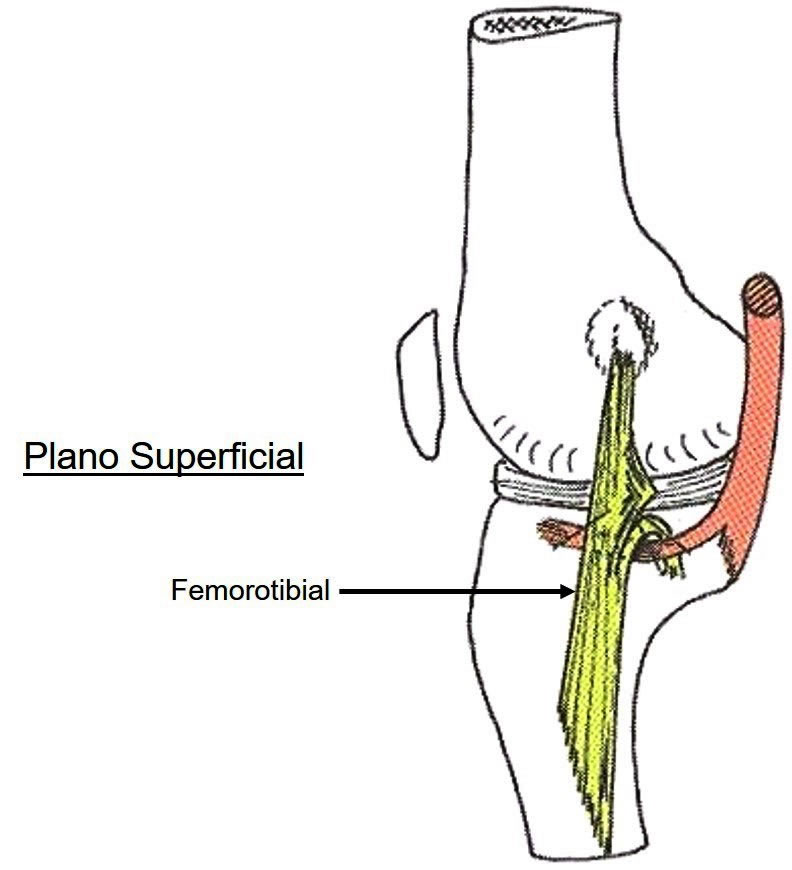 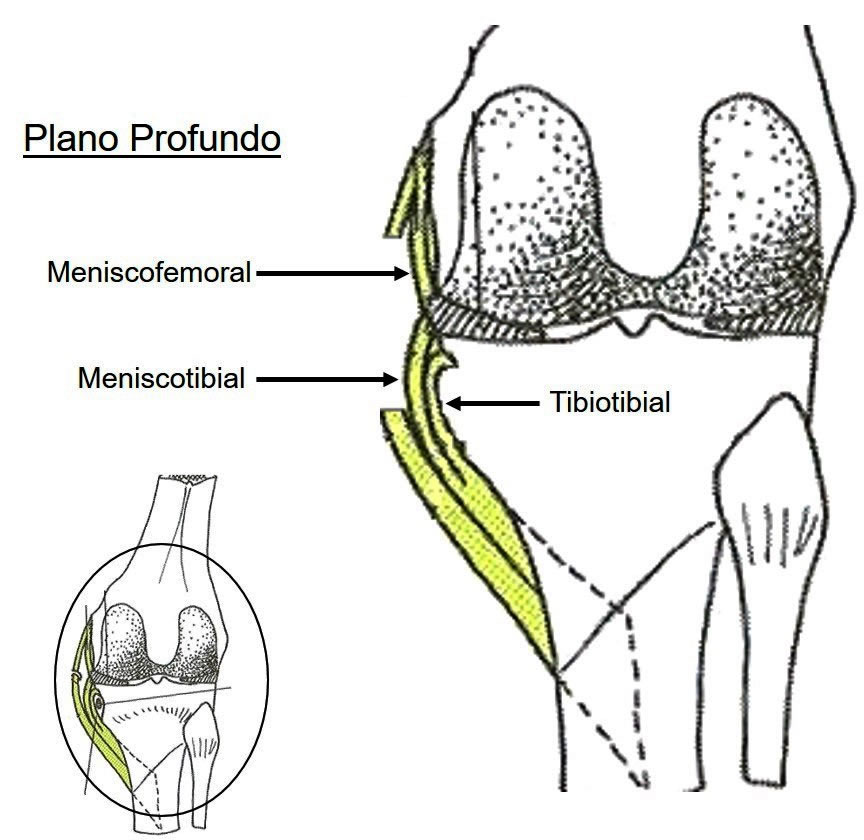 The deep fibers of the LCT are firmly attached to the medial meniscus . 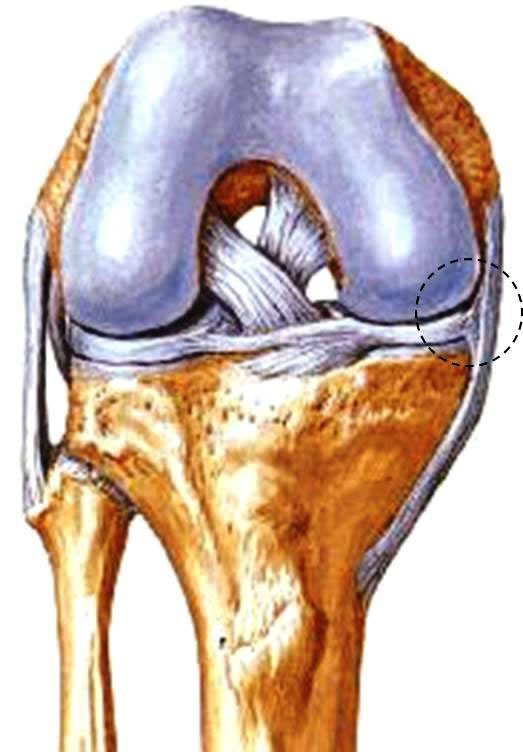 Prevents movement away from the medial condyles of the femur and tibia (medial yawn).

It is a fibrous cord, rounded and strong, inserted in the lateral condyle of the femur and in the head of the fibula. The popliteus muscle tendon passes deep into the peroneal collateral ligament, separating it from the lateral meniscus. 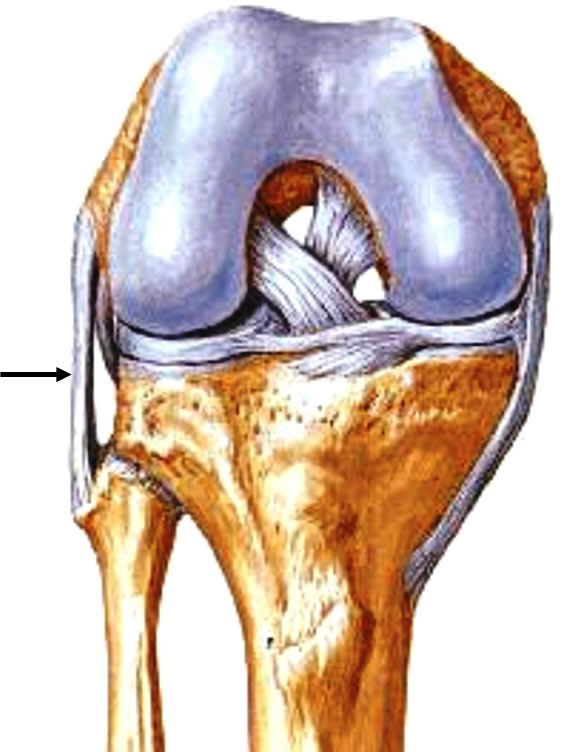 Prevents the movement away from the lateral condyles of the femur and tibia (lateral yawn). 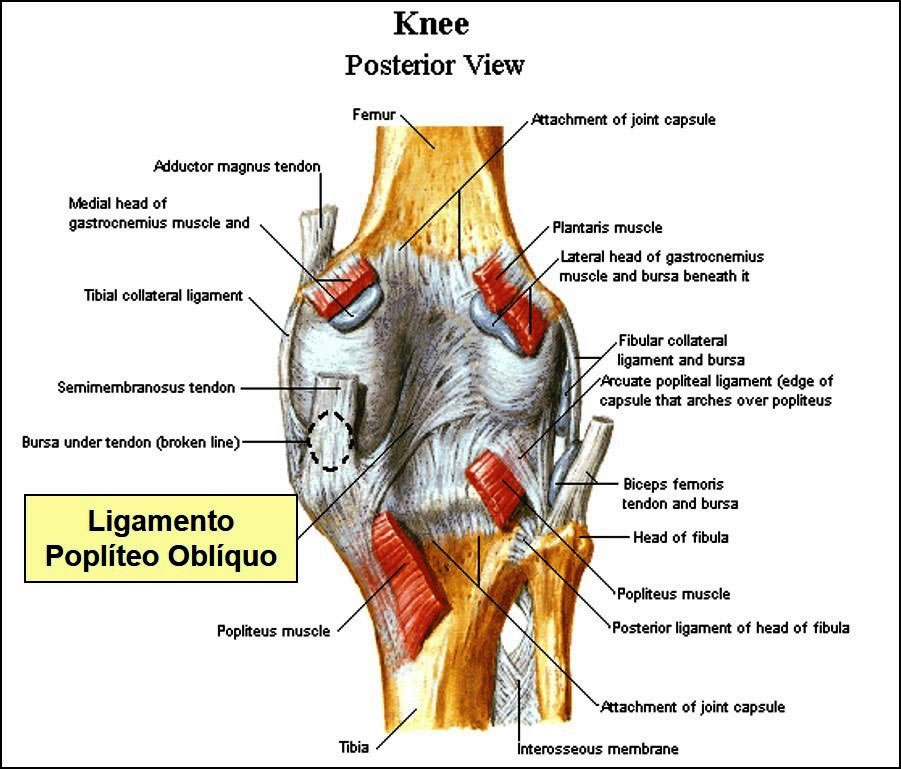 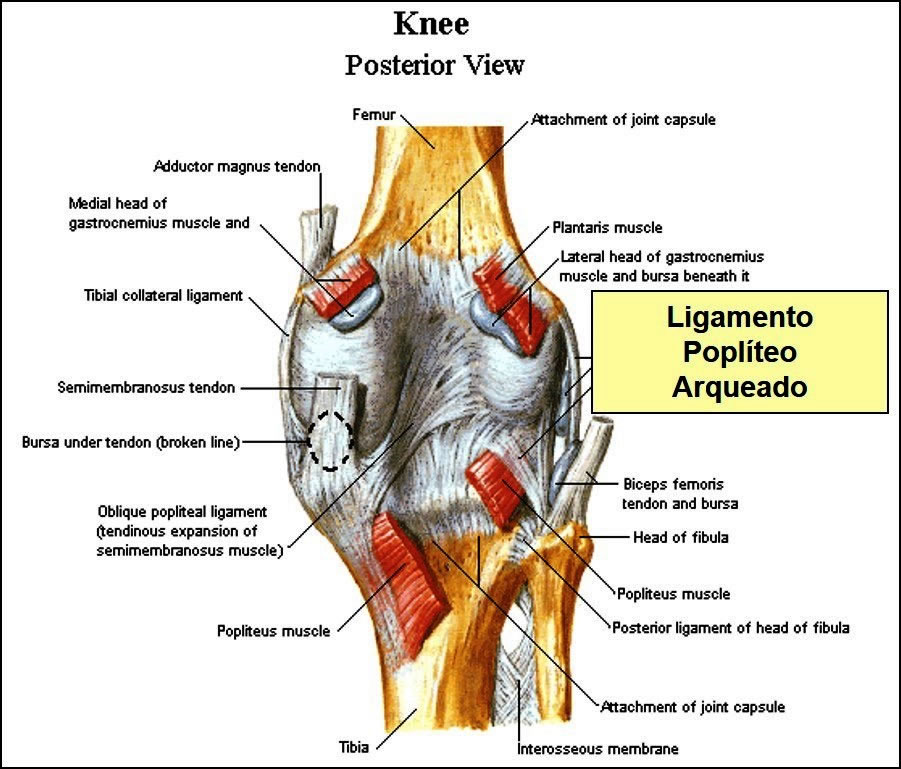 Intra-articular Ligaments of the Knee Joint

It is the weakest of the cruciate ligaments. 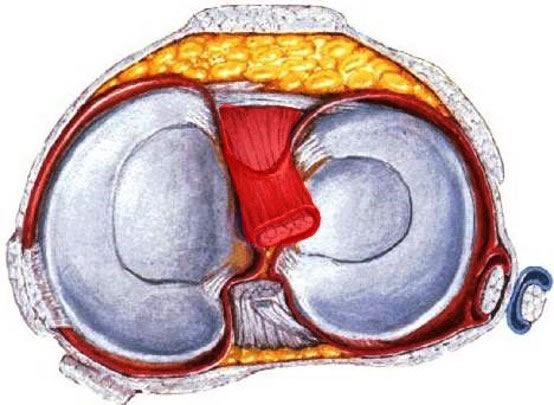 It arises from the anterior interecondylar area of the tibia, immediately behind the medial meniscus attachment. It extends upward, backward and laterally to attach to the posterior part of the medial side of the lateral condyle of the femur. 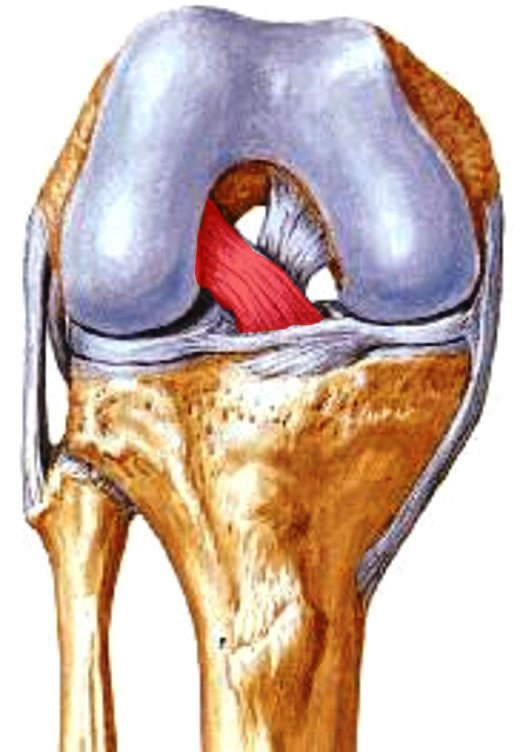 The LCA is made up of two bands:

– Anteromedial more tense during the movement of knee flexion with the foot fixed.

– Posterolateral but tense during knee extension movement with foot fixed. 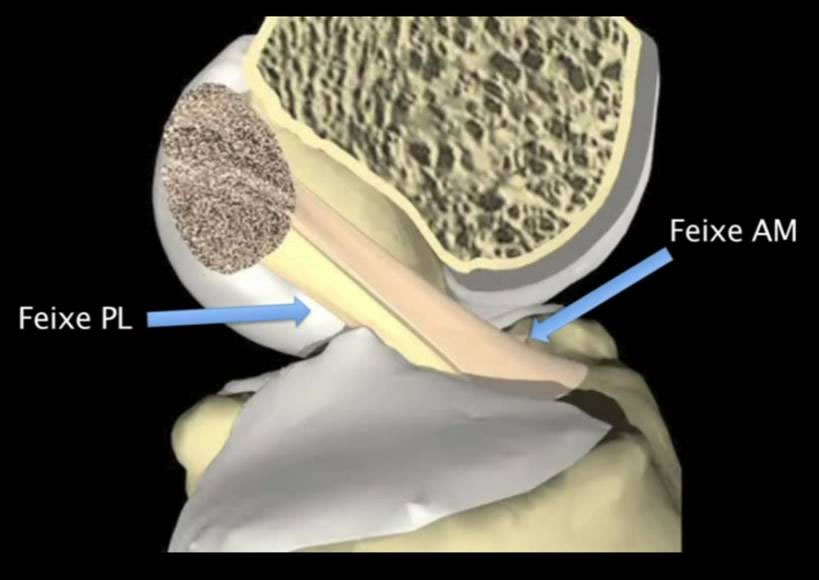 Its functional characteristic is that it is loose when the knee is flexed, and tense when it is fully extended.

It has a relatively scarce blood supply.

Function : prevents anterior sliding movement of the tibia or posterior sliding of the femur (Anterior drawer movement), in addition to knee hypertension.

The most common ACL Injury Mechanism consists of the combination of Semiflexed Knee + Dynamic Knee Valgus + Fixed Foot on the Ground. Often during landing, after a jump, or in rapid changes of direction (pivot).

The PCL is the strongest of the cruciate ligaments, being less oblique with some shorter fibers. 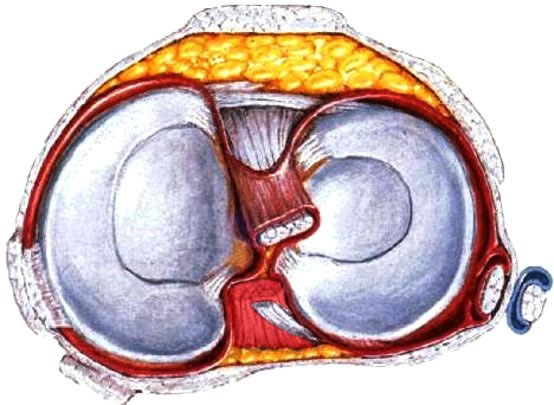 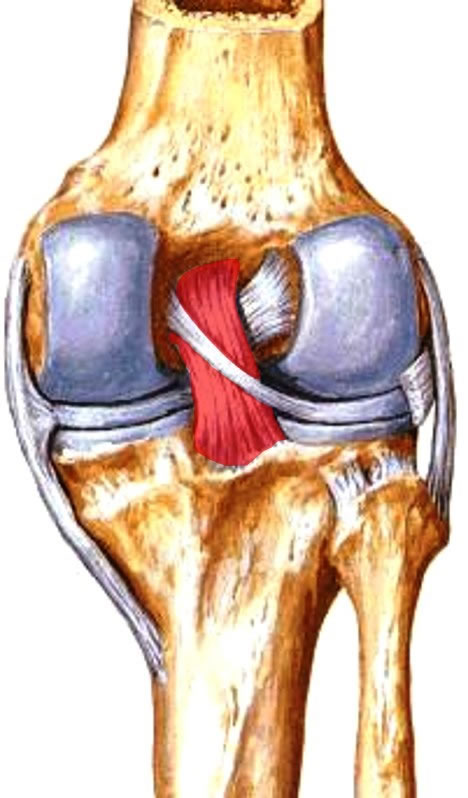 They are semilunar plates of fibrocartilage located on the articular surface of the tibia and act as shock absorbers. 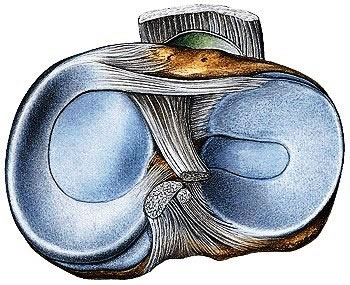 The proximal surfaces are smooth and concave in contact with the articular cartilage of the femur.

The distal surfaces are smooth and flat and rest on the articular cartilage of the tibia.

Menisci are thicker on their outer margins and tapered on their inner margins, which are free and thinner. 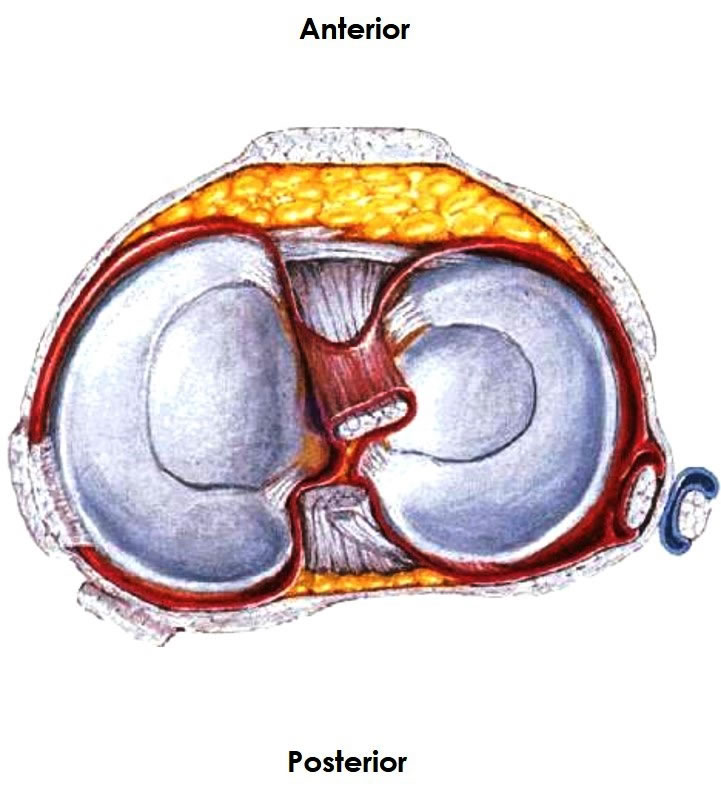 The menisci are firmly attached at their ends to the intercondylar areas of the tibia.

The outer margins attach to the fibrous capsule of the knee joint.

Coronary ligaments are capsular fibers that attach to the margins of the menisci to the condyles of the tibia.

The peripheral zone is vascularized by capillary loops from the fibrous capsule and the synovial membrane, its interior regions are AVASCULAR . 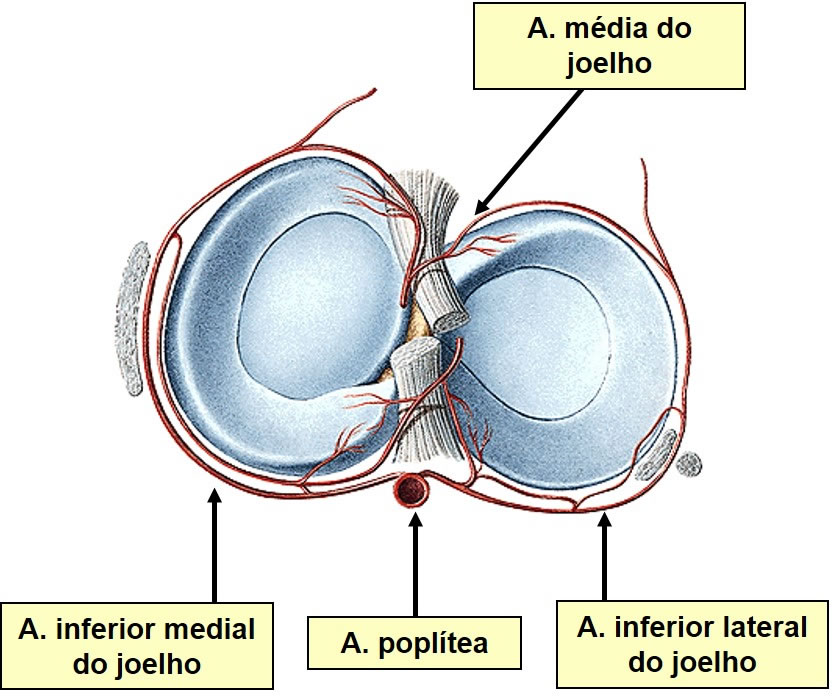 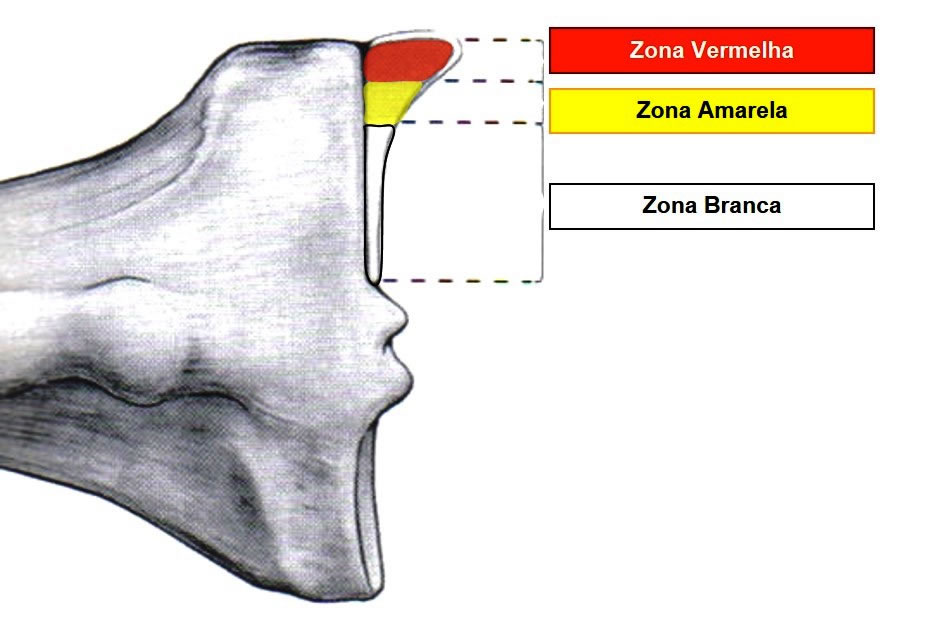 The Transverse Knee Ligament , a thin fibrous band that joins the anterior margins of the menisci, allowing them to move together during knee movements. 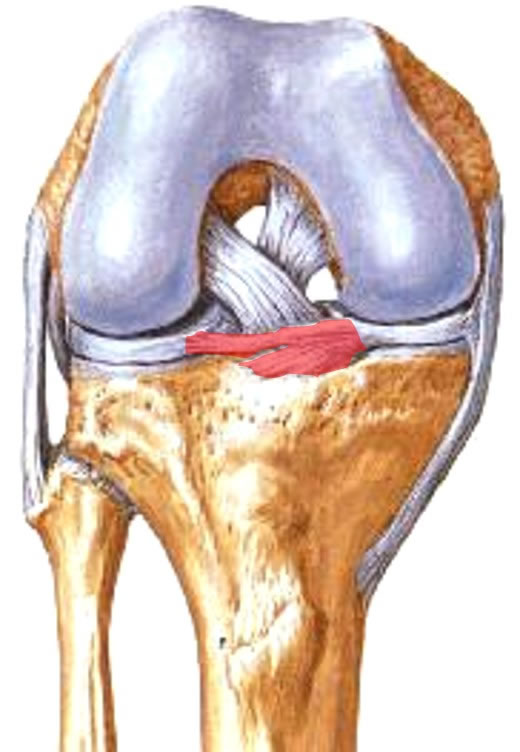 The menisci slip and deform during movement of the knee joint to allow for a more adequate adaptation of the articular surfaces of the femur and tibia,

It is “C” shaped wider posterior than before. 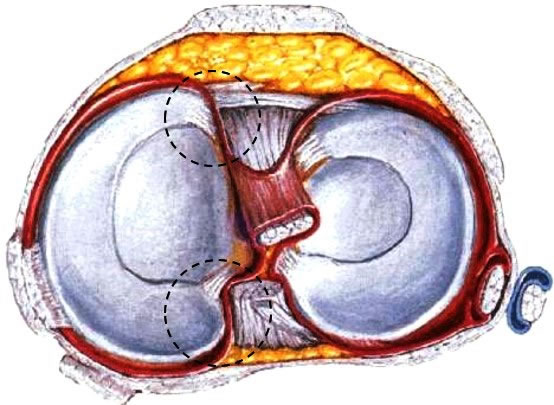 The medial meniscus firmly adheres to the deep surface of the Tibial Collateral Ligament. 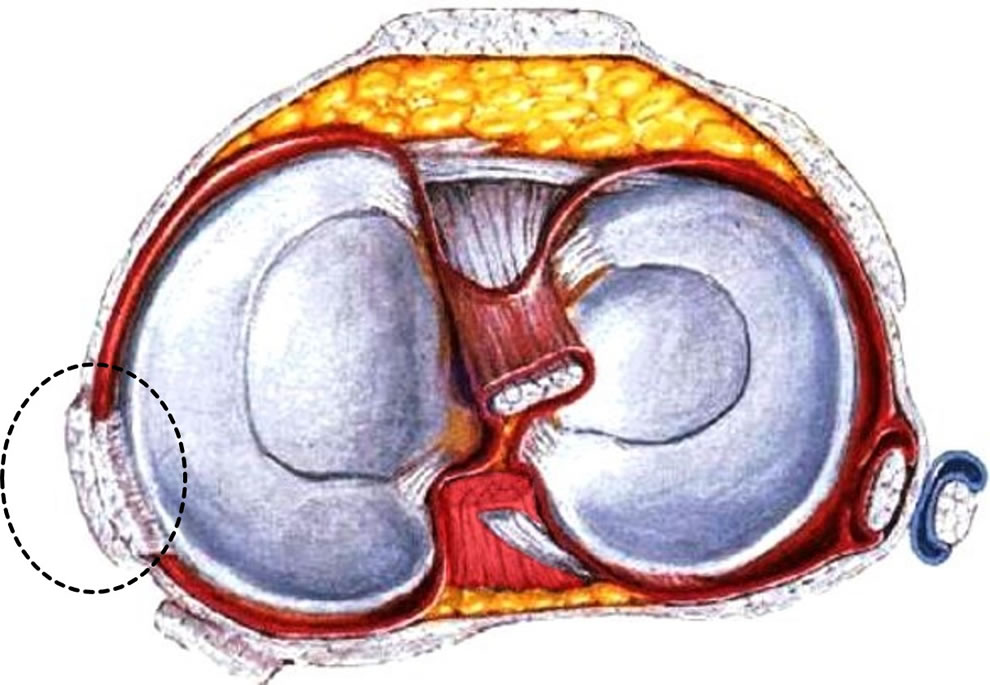 It is almost circular with a uniform width. The lateral meniscus is smaller and more freely mobile than the medial meniscus. 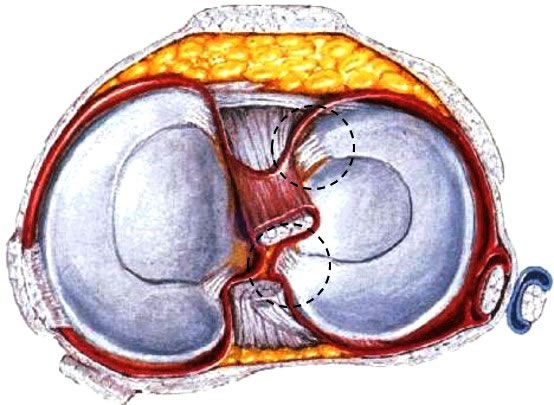 Near its posterior insertion, the posterior meniscofemoral ligament exits to attach it to the medial condyle of the femur. 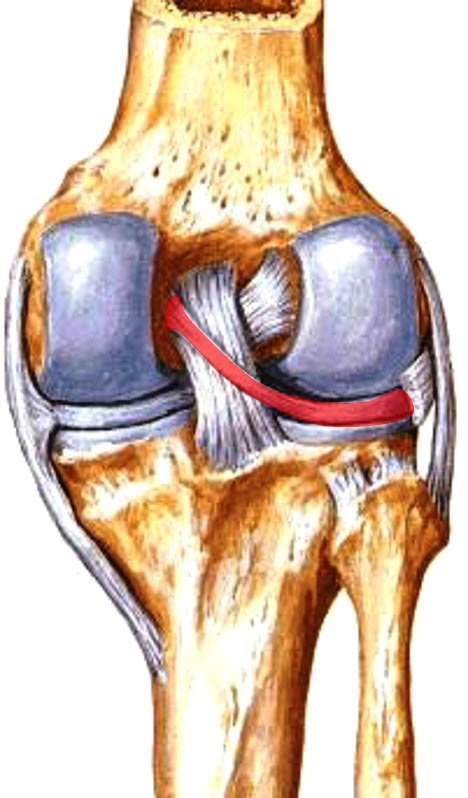