In April 2000, in the book “Mais!”, from “Folha de S. Paulo”, I published the article “The forms of death”, which publicized and explained “plastination”, a new technique for the preservation of cadavers developed a few decades ago by the German anatomist Gunther von Hagens, at the Institute of Anatomy in Heidelberg, Germany. Through this method, von Hagens replaces organic substances from dead bodies with plastic materials (silicone, epoxy resin and polyester), which allows the body's wet materials to acquire plasticity, that is, remain malleable, odorless and dry.
Without a shadow of a doubt, Von Hagens had a great idea: the development of a conservation technique that allows the macrocosmic study of cadavers without the uncomfortable odors or changes in tissue tonality normally produced by traditional conservation chemistries. The anatomo-scientific studies of the human body could be, then, more didactic and enlightening. 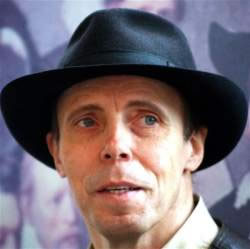 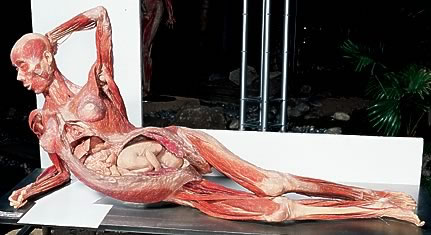 Another innovation pointed out in that article was the introduction of the lay public in this scientific circuit, as von Hagens decided to transform this study material into exhibition pieces, organized under the title of "Worlds of the body".

The first exhibition, in 1995, took place in Japan, attracting thousands of visitors. In Europe, the inauguration of “Worlds of the body” took place in 1997, in Mannheim, also surpassing the expected success in terms of number of visitors. Since that time, the exhibitions have counted a record of more than 13 million visitors, most of them attracted by the fascination that the sight of the corpse provokes and the curiosity to know oneself beyond the surface of the skin.

After visiting the exhibition in Cologne, Germany, in 2000, and an interview with the anatomist, I wrote: “More than an anatomy class, the result produced for the work of the German doctor it is a desacralization or resacralization of the human body and, also, according to him, an attempt to democratize its forms and functions.
the lay visitor, the effect is frightening. Curious, impressed faces stroll through the great hall where more than 200 pieces are on display, including bodies sliced ​​in their horizontal and vertical extensions and healthy and diseased organs, which are shown in detail, with their transparencies, openings and plasticity.” 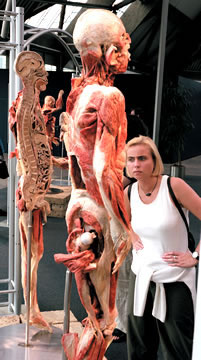 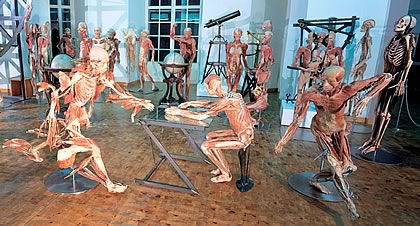 Apparently, Von Hagens had discovered not only a successful new technique in embalming corpses, but also a gold mine, since, in addition to the admission fee for the body exhibitions, the anatomist receives for an embalmed body 75,000 euros per plastination, in other words, approximately BRL 280 thousand.

And just as it rained euros, so did criticism and discussions about the corpses and the exhibitions, starting with the ethical and religious ones.

Breaking the barriers of a scientific and artistic universe by exposing the corpse as a work of art, the anatomist becomes more radical when, in November 2002, in London, he performed, at London's Atlantis Gallery, the first public autopsy , a controversial presentation for around 500 people. Accused of being a controversial and illegal show, Von Hagens, at the time, defended himself, claiming that what he is doing is in the name of a democratization of anatomy, that is, he popularizes a practice used in schools. 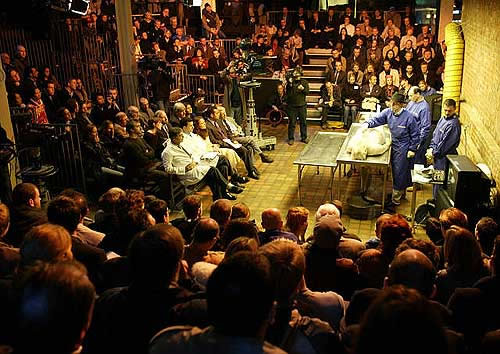 Another reading of the anatomist's work is that he turned into a police case. This is a complaint made by the German magazine “Der Spiegel”, on January 19, 2004, in the form of a 12-page article with the following title: “Dr. Death. The macabre business of the Gunther von Hagens corpse exhibitor”. The article accused the anatomist of not making clear the rules of this work, that is, the origin of the material he uses and how he builds/sculpts the bodies. The cover story of “Der Spiegel” denounced the smuggling, misuse, and unscrupulous marketing of human bodies by the German doctor on behalf of his artistic cadaver exhibitions, currently in double exhibition, in Frankfurt and Singapore.

Showing photos showing employees handling corpses in Dalian, China, according to the magazine, “one of its three corpse factories” (the other two are in Heidelberg, Germany, and in Bischkek, also in China), citing documents that were collected during a survey carried out by the magazine, as well as documenting through bank statements and statements by the anatomist and his employees, the article accused Von Hagens of building an “authentic market for human corpses, which operates under the simplest rules of capitalism: the purchase of cheap raw materials, their manufacture at favorable costs and their profitable commercialization.”

Translating into corpses, according to “Der Spiegel”, in a document collected in November 2003, “there are 647 complete bodies”.

In addition, the document “states that 3909 body parts were enumerated, such as legs, hands or penises, and that 182 fetuses, embryos and newborns were catalogued, with numbers of series, size, height and gender". 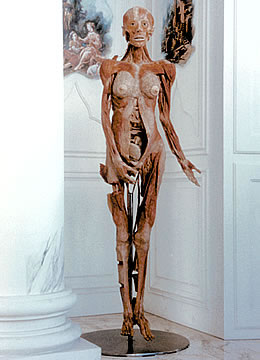 To the question where do corpses or their parts come from?, the magazine replied: “Gunther von Hagens does not only work with the donation of bodies, he takes the bodies that it can”. The article went on to accuse this “dead speculator” of selling, at low cost, in addition to donated bodies, the corpses of Chinese prisoners executed in a military camp near his factory in Dalian. The article also accused von Hagens of deceiving visitors from their exhibitions that they believed to be observing a real and complete corpse and thus to be being enlightened about their own body. According to “Der Spiegel”, nothing more false! 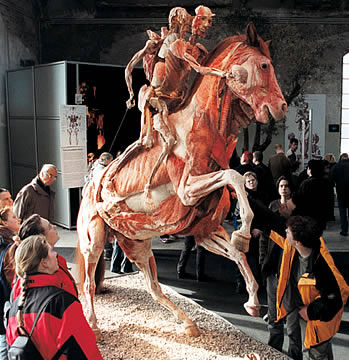 The magazine described that this modern Dr. Frankenstein, as in an assembly line, is taking from the shelves of his factories legs, arms and other parts and organs more perfect or suitable to replace those defective, small or poorly muscled in the corpse that you are putting together.

Showing how von Hagens' kitchen works, "Der Spiegel" wrote that "even the 'quality' of the corpse is minutely recorded. Corpse No. 03MI0077 serves, for example, only as raw material; for this 'whole male body', with a height of 1.66 meters, it was verified: 'lack of the left eye, damaged feet and hands'. On the other hand, the cadaver 03FI093 was registered as first quality material: female, 1.67 meters tall, good muscles, European origin. Suitable for exhibition.”

The article ended with the prophetic Von-hagenian vision that the world will only recognize the grandeur of his work after his death and his own plastination. 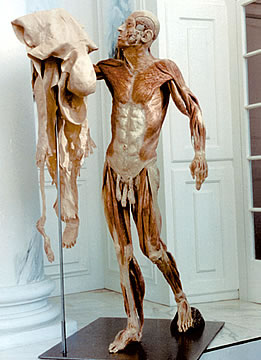 Of life and death

What the anatomist Gunther von Hagens does, "the plastination of dead human bodies", can be seen from a double point of view.

On the one hand, this procedure reveals to us a little of the problematic relationship between man and life, with its mechanisms and with its history. Behind this new technology is a biological power, a domain of life, the body and its knowledge that appeared in the Western world as early as the 18th century. According to Michel Foucault (“The right to death and power over life”, in “History of Sexuality”, 1988, Ed. Graal), this was a movement of transformation linked to the development of capitalism. It is about the development of a scientific power-knowledge that transforms life and the perspective from which life is seen and, consequently, death.

Through the effects operated by this knowledge, including a reclassification of life and the body, or a power-to-know about the body and life, it is observed how science appropriates the rights over the body and life, subverting the old and traditional systems that controlled it, such as, for example, that power exercised, in the past, by the legal, religious, or state areas, among others.

This domain makes it possible for the body to be known today as it is or as one wants it to be. This means that a sovereignty is currently exercised over what is or can be the body and life, which can be mirrored in the new biotechnologies developed for the conservation and care of the body, life, death, as well as for creation or the transformation of life.
Thus, the process of plastination of corpses by Gunther von Hagens also reflects this current moment of domination by man of himself and of other bodies, of life and death. The new possibilities of reading and manipulating the body (of the living and the dead) seems to be a global phenomenon, which all of us, in different contexts, make, seek to know and consume. 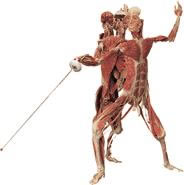 Body transformation technologies, such as those developed by plastic surgery, to replace organs or body parts, such as those undertaken in transplants, in prosthetic insertions, or the biogenetic and pharmacological knowledge that allows for the control and the artificial creation of life or its prolongation, are other examples of the historical moment that we have built and that we live.

This same process of manipulation of the body and of life, which is in the science and technology created by it, promotes, on the other hand, the transformation of this body into an object, in a thing or merchandise, insofar as the body transforms itself into matter that consumes itself and is consumed: the corpses “plastinized” by dr. von Hagens, for example, exhibited in museums, were conceived to, in addition to enabling a macrocosmic study of the human body, be consumed as an image and sold as merchandise. After all, the large number of visitors to the cadaver exhibits indicates that we are filling museums, that we want to see ourselves inside out, or that we have some fascination with the morbid or the grotesque.

In other words, what, according to Foucault, was the object of knowledge for the clinical analysis of many diseases, that is, the cadaver, was transformed in the exhibitions “Worlds of the body”, in a concert, or in an expensive and bizarre object of consumption.

But, “Worlds of the body”, according to the German magazine, points to another observation: that these corpses were secretly mounted. It means that what Von Hagens presents as a "democratization of anatomy", that is, as a scientific and anatomical study of the human body, is an assembly, as it is an object made up of the sum of human body parts, unilaterally defined by he to please the public. This manipulation of the human body raises an ethical issue, that of the risks of misuse of that body, and a legal issue, which is its commercialization -problems that the article published in “Der Spiegel” denounces and criticizes. 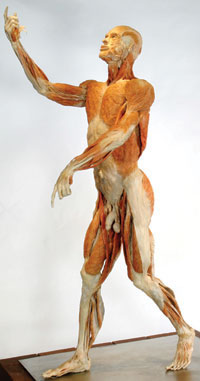 Summoning the forgery, the newspaper “Frankfurter Allgemeine” published, on January 28th, a clarification given by professors at the Institute of Anatomy of the University of Heidelberg, who said they were far from it. cadaver exhibition project, claiming that what Von Hagens presents is far from being didactic and acceptable information. According to the article, "those people who seek exposure because they really have an interest in human anatomy, pay to be deceived." 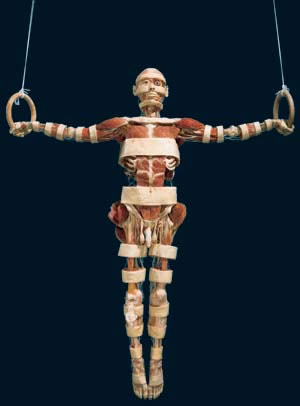 Since the ethical values ​​of a civilization are constructions determined by time, culture, habits and beliefs, it is clear that a redimensioning of the ideas of the body, life and death has been happening, along with the ethical and moral values ​​that accompany them.

Thus, despite the opportune technological innovation and the bold expansion that it makes of the anatomical knowledge of the human body, expanding its domains to art and to the lay public, it seems that the biggest problem de Von Hagens has been not to reveal the history of the restoration of the corpses, not to have made clear the rules of origin and construction of the bodies, making the idea of ​​exposing corpses to be restricted to the idea of ​​the show and the conception of a big business , given our fascination with ourselves. 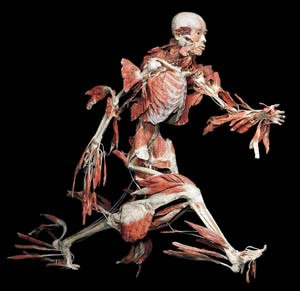