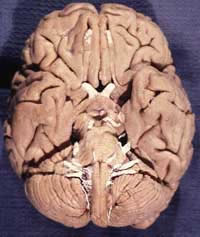 Cranial nerves are the ones that connect to the brain. The 12 pairs of cranial nerves receive a specific nomenclature, being numbered in Roman numerals, according to their apparent origin, in the rostrocaudal direction.

They are linked with the cortex of the brain by corticonuclear fibers that originate from neurons in the motor areas of the cortex, descending mainly in the genicular part of the internal capsule to the brainstem.

Sensory or afferent cranial nerves arise from neurons outside the brain, grouped to form ganglia, or located in peripheral sense organs.

The nuclei that give rise to ten of the twelve pairs of cranial nerves are located in vertical columns in the brainstem and correspond to the gray matter of the spinal cord.

According to the Functional Component , cranial nerves can be classified into Motor, Sensory and Mixed.

The Motors (pure) are those that move the eye, the tongue and, incidentally, the latero-posterior muscles of the neck.

Sensitives (pure) are intended for the sense organs and therefore are called sensory and not just sensitive, which do not refer to general sensitivity (pain, temperature and touch).

The Mixed (motor and sensitive) are four in number:

Five of them still have vegetative fibers, constituting the peripheral cranial part of the autonomic system.

They are as follows:

The craniocaudal sequence of the cranial nerves is as follows:

It is an exclusively sensory nerve, whose fibers conduct olfactory impulses, being classified as special visceral afferents. More information about the olfactory nerve can be found in Telencephalon (Rhynencephalon).

It consists of a thick bundle of nerve fibers that originate in the retina, emerge close to the posterior pole of each eyeball, penetrating the skull through the optic canal. Each optic nerve unites with the one on the opposite side, forming the optic chiasm, where there is a partial crossing of its fibers, which continue in the optic tract until the lateral geniculate body. The optic nerve is an exclusively sensory nerve, whose fibers conduct visual impulses, classified as special somatic afferents.

They are motor nerves that penetrate the orbit through the superior orbital fissure, distributing to the extrinsic muscles of the eyeball, which are the following: levator palpebrae superioris, superior rectus, inferior rectus, medial rectus, lateral rectus, superior oblique, inferior oblique. All these muscles are innervated by the oculomotor, with the exception of the lateral rectus and superior oblique muscles, which are innervated respectively by the abducens and trochlear nerves. The fibers that innervate the extrinsic muscles of the eye are classified as somatic efferents.

The oculomotor nerve arises in the medial sulcus of the cerebral peduncle; the trochlear nerve just below the inferior colliculus; and the abducens nerve in the inferior pontine sulcus, close to the midline.

The three nerves in question approach, still inside the skull, to cross the superior orbital fissure and reach the orbital cavity, going to distribute to the extrinsic muscles of the eye.

The oculomotor nerve also conducts vegetative fibers, which go to the intrinsic musculature of the eye, which moves the iris and lens.

The trigeminal motor root consists of fibers that accompany the mandibular nerve, distributing to the masticatory muscles. The most frequently observed medical problem in relation to the trigeminal nerve is neuralgia, which is manifested by very intense painful crises in the territory of one of the branches of the nerve. 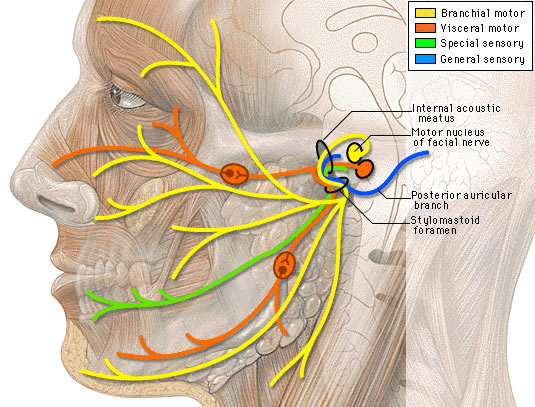 1. Ophthalmic nerve : it crosses the superior orbital fissure (together with the III, IV, VI cranial nerves and the ophthalmic vein) and upon reaching the orbit it supplies three terminal branches, which are the nasociliary, frontal and lacrimal nerves.

The ophthalmic nerve is responsible for the sensitivity of the orbital cavity and its contents, while the optic nerve is sensory (vision).

2. Maxillary Nerve : It is the second branch of the trigeminal nerve. It crosses the pterygopalatine fossa as if it were an aerial cable to enter the inferior orbital fissure and penetrate the orbital cavity, at which point it is called the infraorbital nerve.

In the vicinity of the apices of the roots of the maxillary teeth, the three superior alveolar nerves give off branches that anastomose abundantly to form the superior dental plexus.

3. Mandibular Nerve : It is the third branch of the trigeminal nerve. It crosses the skull through the foramen ovale and just below it branches into a true bouquet, the two main branches being the lingual and inferior alveolar nerves.

The lingual nerve runs to the tongue, giving general sensitivity to its anterior two-thirds.

At approximately the level of the second premolar, the inferior alveolar nerve gives off a collateral branch, which is the mental nerve (mental nerve), which emerges through the foramen of the same name, to provide general sensitivity to the soft parts of the chin.

The motor part of the mandibular nerve innervates the masticatory muscles (temporal, masseter, and medial and lateral pterygoid), with nerves that have the same name as the muscles.

It is also a mixed nerve, presenting a motor and a sensory gustatory root. It emerges from the bulbopontine sulcus through a motor root, the facial nerve proper, and a sensory and visceral root, the intermediate nerve. Together with the vestibulocochlear nerve, the two components of the facial nerve penetrate the internal acoustic meatus, inside which the intermediate nerve loses its individuality, thus forming a single nerve trunk that penetrates the facial canal.

The motor root is represented by the facial nerve itself, while the sensory root is called the intermediate nerve.

Both have their apparent origin in the inferior pontine sulcus and run parallel to the internal acoustic meatus, where they penetrate together with the vestibulocochlear nerve.

Inside the internal acoustic meatus, the two nerves (facial and intermediate) penetrate into a proper channel excavated in the petrous part of the temporal bone, which is the facial canal.

Motor fibers cross the parotid gland reaching the face, where they give two initial branches: the temporofacial and cervicofacial, which fan out to innervate all the cutaneous muscles of the head and neck.

Some motor fibers go to the stylohyoid muscle and the posterior belly of the digastric muscle.

Sensory (gustatory) fibers follow a branch of the facial nerve, which is the chorda tympani, which joins the lingual nerve (mandibular branch, third trigeminal branch), taking itself as a vector to distribute itself in the anterior two-thirds of the body. tongue.

The facial nerve also has vegetative (parasympathetic) fibers that use the intermediate nerve and then follow the greater petrosal nerve or the chorda tympani (both branches of the facial nerve) to innervate the lacrimal, nasal and salivary glands (sublingual and submandibular glands) .

In summary, the facial nerve provides motor innervation to all cutaneous muscles of the head and neck (stylohyoid muscle and posterior belly of the digastric).

Consisting of two groups of perfectly individualized fibers that form, respectively, the vestibular and cochlear nerves. It is an exclusively sensory nerve, which penetrates the pons in the lateral portion of the bulbopontine sulcus, between the emergence of the VII pair and the cerebellar flocculus. It occupies, together with the facial and intermediate nerves, the internal acoustic meatus, in the petrous portion of the temporal bone.

The vestibular part is formed by fibers that originate from the sensory neurons of the vestibular ganglion, which conduct nerve impulses related to balance.

The cochlear part is made up of fibers that originate from the sensory neurons of the spiral ganglion and that conduct hearing-related nerve impulses.

The vestibulocochlear nerve fibers are classified as special somatic afferents.

It is a mixed nerve that emerges from the posterior lateral sulcus of the bulb, in the form of root filaments, which are arranged in a vertical line. These filaments come together to form the trunk of the glossopharyngeal nerve, which exits the skull through the jugular foramen. In its course, through the jugular foramen, the nerve presents two ganglia, superior and inferior, formed by sensory neurons. Upon exiting the skull, the glossopharyngeal nerve travels downward, branching into the root of the tongue and the pharynx.

Of these, the most important is represented by the general visceral afferent fibers, responsible for the general sensitivity of the posterior third of the tongue, pharynx, uvula, tonsil, Eustachian tube, in addition to the carotid sinus and body. Also noteworthy are the general visceral efferent fibers belonging to the parasympathetic division of the autonomic nervous system and ending in the optic ganglion. From this ganglion, nerve fibers of the auriculotemporal nerve leave that will innervate the parotid gland.

The vagus nerve is mixed and essentially visceral. It emerges from the posterior lateral sulcus of the medulla in the form of root filaments that gather to form the vagus nerve. It emerges from the skull through the jugular foramen, travels through the neck and thorax, ending in the abdomen. In this path, the vagus nerve gives rise to several branches that innervate the pharynx and larynx, entering the formation of the visceral plexuses that promote the autonomous innervation of the thoracic and abdominal viscera.

The vagus has two sensory ganglia: the superior ganglion, located at the level of the jugular foramen; and the inferior ganglion, situated just below this foramen. The internal branch of the accessory nerve joins the vagus between the two ganglia.

General visceral efferent fibers: they are responsible for the parasympathetic innervation of the thoracic and abdominal viscera.

Special visceral efferent fibers: innervate the muscles of the pharynx and larynx.

The efferent fibers of the vagus originate in nuclei situated in the medulla, and the sensory fibers in the superior and inferior ganglia.

The trunk is divided into an internal and an external branch. The internal joins and distributes with the vagus, and the external innervates the trapezius and sternocleidomastoid muscles.

The fibers from the cranial root that join the vagus are:

Special visceral efferent fibers, which innervate the muscles of the larynx;

Essentially motor nerve. It emerges from the anterior lateral sulcus of the medulla in the form of root filaments that unite to form the nerve trunk. This one emerges from the skull through the hypoglossal canal, and goes to the intrinsic and extrinsic muscles of the tongue (it is related to its motricity). Its fibers are considered somatic efferents.