The penis is the male erectile and copulatory organ.

It is represented by a cylindrical formation that is attached to the most anterior region of the perineum, and whose free end is rounded. 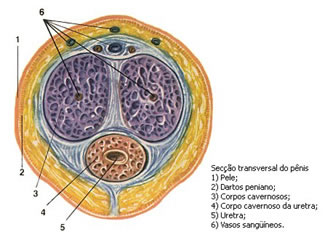 The tissue that has the ability to fill and empty with blood forms three cylinders, of which two are pairs (right and left) and are located parallel, above (considering the penis in a horizontal or semi-erect position) and the third is odd and median, and is situated
longitudinally, below the two preceding ones.

The two upper cylinders are called the corpora cavernosa of the penis and the lower one, the corpus spongiosum of the penis. 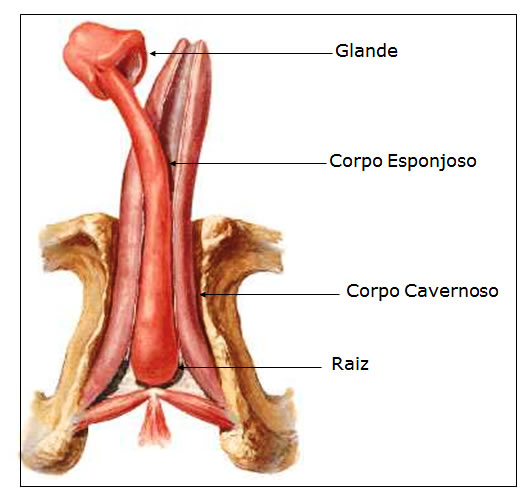 Each branch of the corpora cavernosa is wrapped longitudinally by the fibers of the ischiocavernosus muscle on the same side, which attach it to the respective inferior branch of the pubis, constituting the root of the penis.

Moving forward, the two corpora cavernosa approach each other, separated only by a sagittal fibrous septum that is the septum of the penis.

If we examine the two corpora cavernosa from below, we will see that in the anteroposterior line of union, a dihedral angle is formed, which, going forward, gradually transforms into a gutter, where the spongy body is lodged.

Anteriorly, the corpora cavernosa end abruptly behind an expansion of the corpus spongiosum, known as the glans.

The corpus spongiosum is initiated posteriorly by a median expansion located just below the urogenital diaphragm, which is called the bulb of the penis.

Forward, the medulla continues with the corpus spongiosum, which gradually thins and lodges in the median sulcus formed and inferiorly by the two corpora cavernosa.

At the apex of the glans we find an orifice, which is the external ostium of the urethra.

In this ostium, the spongy urethra opens, which runs longitudinally through the center of the spongy body, from the superior surface of the penile bulb, where it penetrates.

At the junction of the glans with the rest of the body of the penis, a strangulation called neck is formed.

The penis, therefore, could be subdivided into Root, Body and Gland . 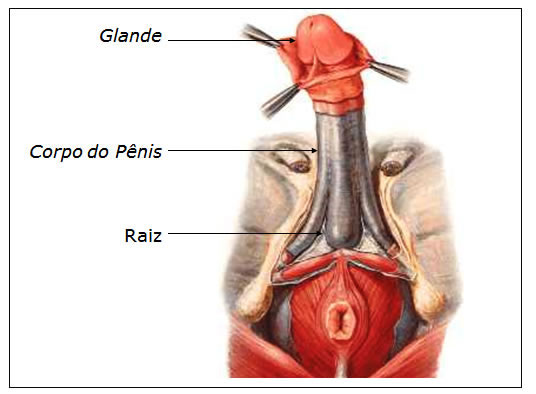 Surrounding the free part of the penis is a thin, sliding skin known as the foreskin.

Medianly, below the glans, the mucosa that surrounds it and then reflects to line the skin of the anterior expansion of the foreskin, presents a sagittal fold called the frenulum of the foreskin.

Structurally, deep to the skin is the subcutaneous tissue, which receives the special name of the superficial fascia of the penis and where smooth muscle fibers are distributed that continue to the dartos of the scrotum.

In a deeper plane, there is a fibrous membrane that jointly surrounds the corpora cavernosa and the corpus spongiosum, which is the deep fascia of the penis.

The interior of these three elements has a spongy appearance that results from the existence of numerous thin trabeculae that intertwine disorderly.

There are spaces between these trabeculae that can admit a greater amount of blood, making the penis an erectile organ.

The arteries and veins of the penis enter or leave at the level of the bulb and branches of the penis, they occur longitudinally on its back, providing collateral branches throughout the course.