The movement of joints essentially depends on the shape of the surfaces that come into contact and on the means of union that can limit it. Depending on these factors, joints can perform movements of one, two or three axes. This is the criterion adopted to classify them functionally.

– Kinglymus or Hinge Joint : the joint surfaces allow movement in a single plane. The joints are held together by strong collateral ligaments. Examples: Interphalangeal joints and humerus-ulnar joint.
– Trochoid or Pivot Joint : When the movement is exclusively rotational. The joint is formed by a pivot-shaped process rotating within a ring or a ring on a pivot. Examples: Proximal radio-ulnar and atlanto-axial joints.

– Condylar Joint : In this type of joint, an ovoid or condylar joint surface is received in an elliptical cavity in order to allow flexion and extension, adduction and abduction and circumduction movements, that is, all joint movements, minus axial rotation. Example: Wrist joint.

– Saddle joint: In these joints the bony faces are reciprocally concave-convex. They allow the same movements as the condylar joints. Example: Carpometacarpal bones of the thumb.

– Spheroid Joint or Enarthrosis : It is a form of joint in which the distal bone is able to move around several axes, which have a common center. Examples: Hip and shoulder joints.

There is yet another type of joint called Flat Joint, which allows only sliding movements. Examples: Joints of the vertebral bodies and in some joints of the carpal and tarsus.

ligaments
Ligaments are made up of collagen fibers arranged parallel to or closely intertwined with each other. They are malleable and flexible to allow perfect freedom of movement, but they are very strong, resistant and inelastic (so as not to give in easily to the action of forces.

joint capsule
It is a connective membrane that surrounds the synovial joints like a cuff.

It has two layers: the fibrous membrane (outer) and the synovial membrane (inner).

The Fibrous Membrane (fibrous capsule) is more resistant and may be reinforced, in some points, by fibrous bundles, which constitute the capsular ligaments, intended to increase its resistance. In many synovial joints there are ligaments independent of the joint capsule called extra-capsular or accessory and in some, as in the knee joint, there are also intra-articular ligaments. , prevent movement in undesirable planes and limit the range of movements considered normal.

The Synovial Membrane is the innermost layer of the joint capsule and forms a closed sac called the synovial cavity. It is abundantly vascularized and innervated and is responsible for the production of synovial fluid. It is argued that the synovium is a true secretion or an ultra-filtrate of the blood, but it is certain that it contains hyaluronic acid which gives it the viscosity necessary for its lubricating function. 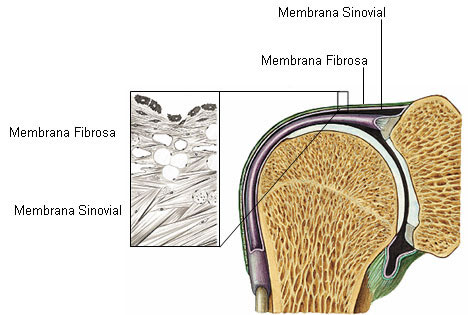 In several synovial joints, interposed between the articular surfaces, there are fibrocartilaginous formations, the intra-articular discs and menisci, whose function is discussed: would they serve to better adapt the surfaces that articulate (making them congruent) or would they be structures destined to receive violent pressures, acting as shock absorbers. Menisci, with their characteristic crescent shape, are found in the knee joint. An example of an intra-articular disc is found in the sternoclavicular and TMJ joints.

Synovial Sheath of the Tendons
Facilitate the sliding of tendons that pass through fibrous and bony tunnels (wrist flexor retinaculum).

Synovial Bags (Bursas)
They are cracks in the connective tissue between muscles, tendons, ligaments and bones. They consist of closed bags of synovial lining. They facilitate the sliding of muscles or tendons over bony or ligamentous prominences.