Shoulder movements are NOT generated by just one joint, on the contrary, the “ SHOULDER COMPLEX ” is a functional system composed of five joints. These characteristics make it the most mobile joint in the upper limb.

This joint complex works in perfect synchronism, its great range of motion, however, makes it a relatively unstable joint and subject to numerous injuries.

The Shoulder Functional Complex is formed with five joints:

It is the only true joint between the cingulate of the upper limb and the axial skeleton.

The joint surfaces involved are: 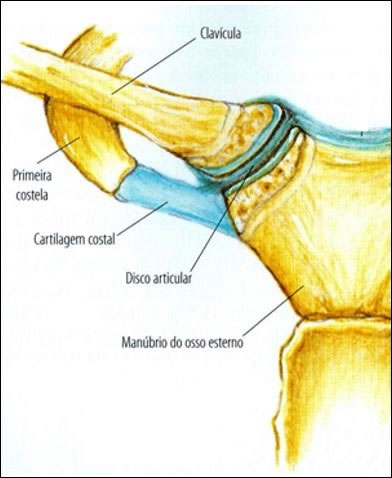 The bones are joined by a fibrous capsule that surrounds the entire joint, reinforced at the front and back by the Anterior and Posterior Sternoclavicular Ligaments. 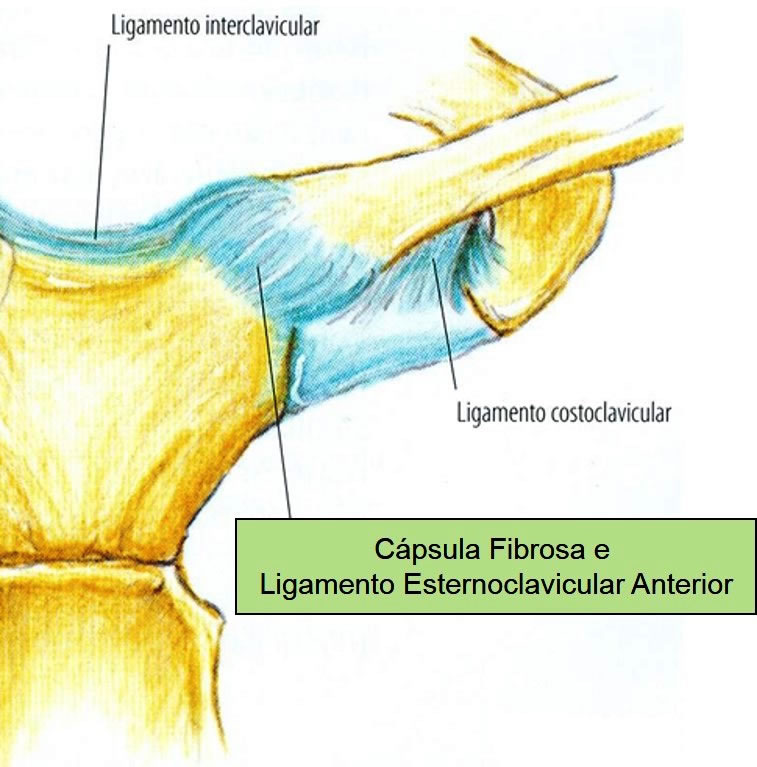 Anterior Sternoclavicular Ligament – is a broad bundle of fibers covering the anterior aspect of the joint.

Posterior Sternoclavicular Ligament – is an analogous bundle of fibers that covers the posterior aspect of the joint. 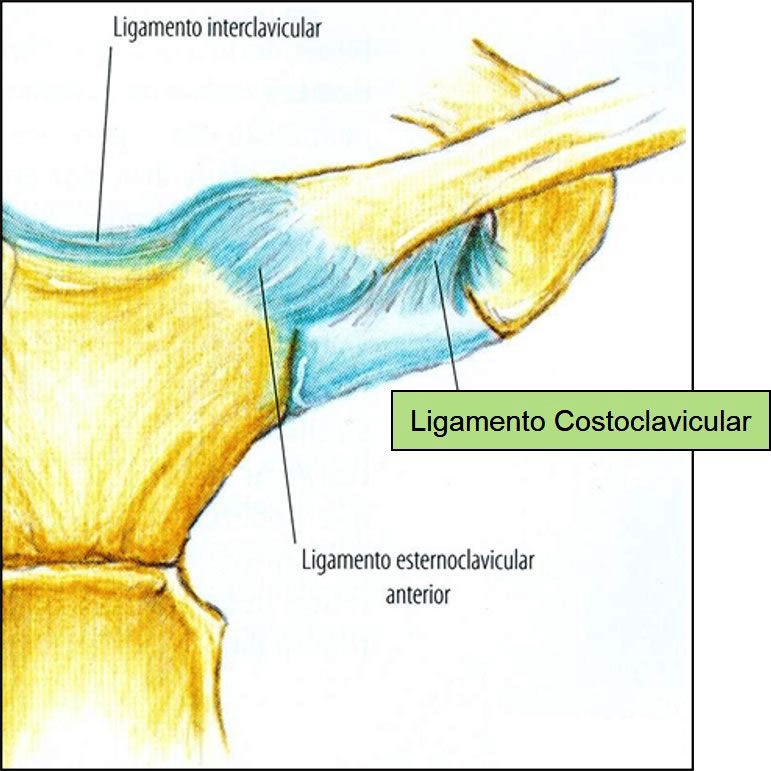 Joint bone pieces are not fully congruent, with a fibrous or fibrocartilaginous articular disc between the clavicle and sternum. 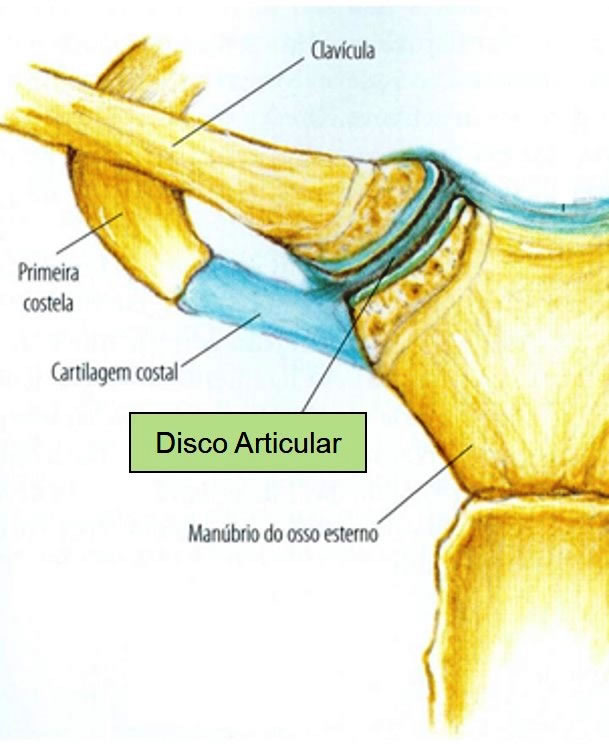 The disc completely divides the joint cavity in two, with their respective synovial membranes, which can communicate with each other, depending on the presence or absence of a perforation in their center.

Interclavicular Ligament – is a flattened bundle that joins the upper surfaces of the sternal ends of the clavicles. 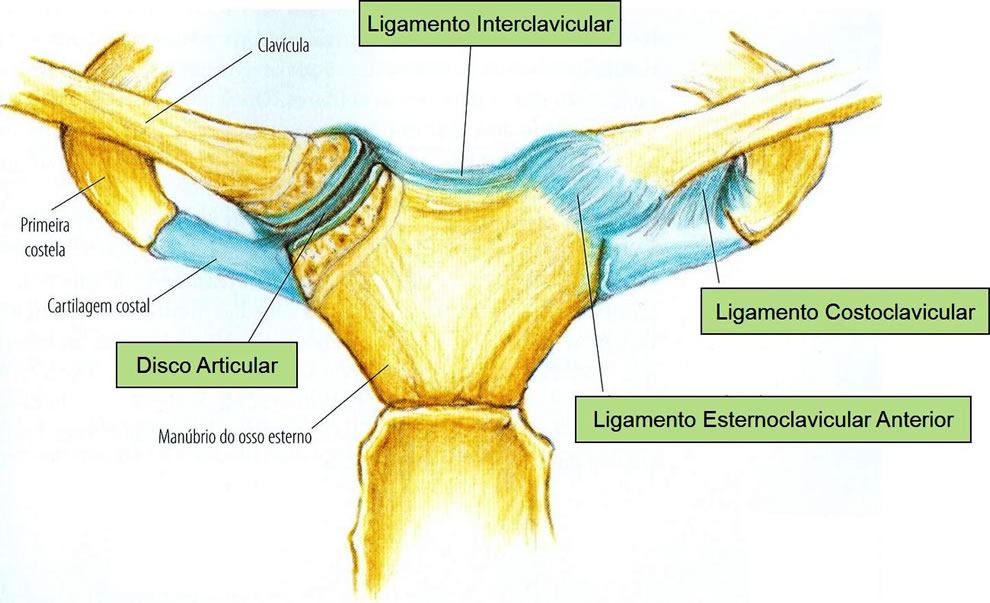 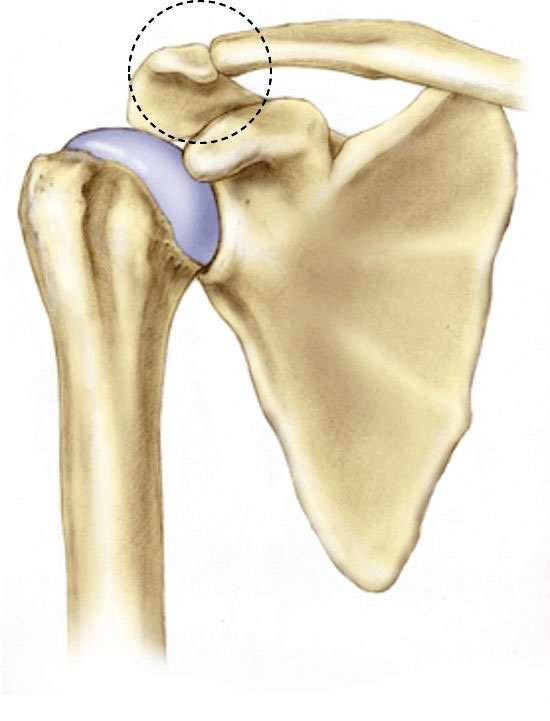 The joint is surrounded by the joint capsule that attaches to the joint margins of the clavicle and acromion. In some cases, an incomplete disc of fibrocartilage extends from the upper portion of the capsule into the cavity.

Covering the joint superiorly is the capsular acromioclavicular ligament , whose fibers extend from the superior surface of the acromial end of the clavicle to the surface corresponding to the acromion. 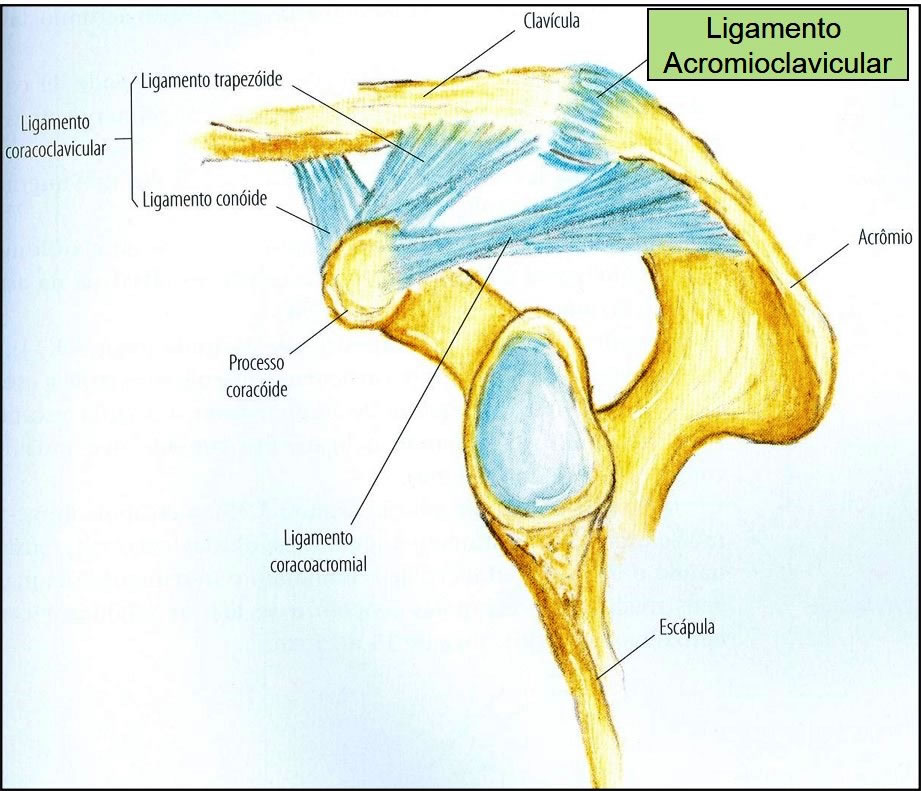 Although unrelated to the capsule, the Coracoclavicular Ligament represents a strong link between the clavicle and the scapula.

The Coracoclavicular Ligament is made up of two bundles: 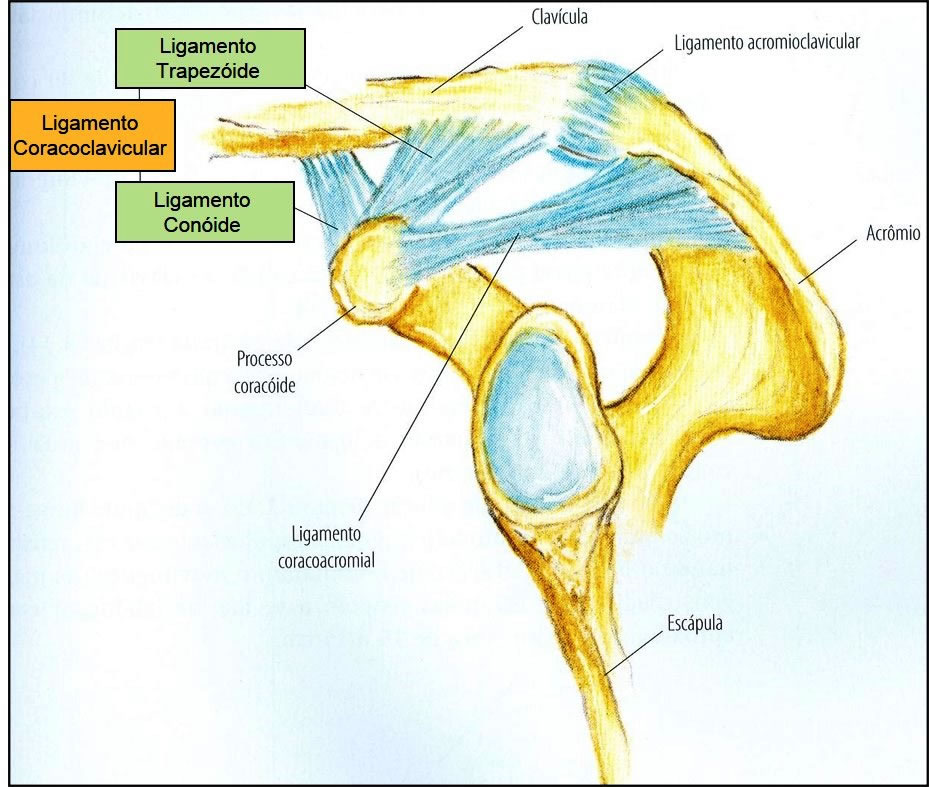 It is a ball-and-socket synovial joint that allows a wide range of motion, thus making it a relatively UNSTABLE joint.

The humeral head (round and large) articulates with the glenoid cavity of the scapula. 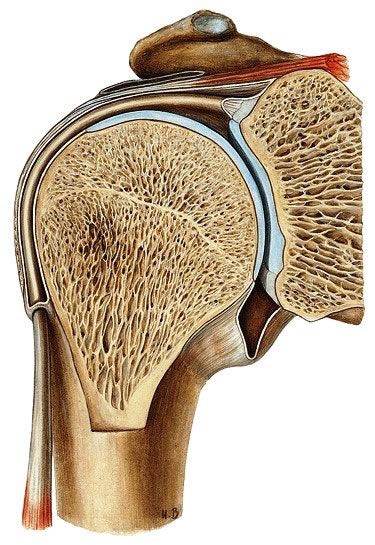 The convexity of the humeral head exceeds the glenoid concavity and, thus, the cavity is deepened by the presence of a fibrocartilage ring, called the GLENOIDAL LIP , which is attached to the margins of the glenoid cavity, increasing the stability of the glenohumeral joint by 30°. 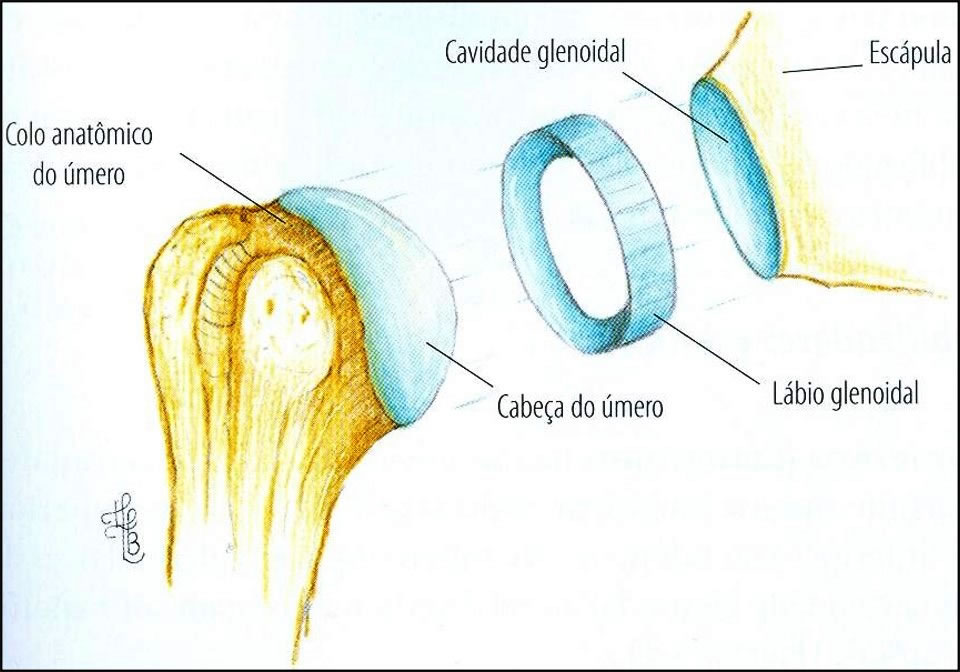 Labium (Labrum) Glenoid – is a fibrocartilaginous rim inserted around the glenoid cavity. It has an important role in glenohumeral stabilization and when ruptured, it provides joint instability, facilitating anterior or posterior displacement of the humerus (dislocation).

Both articular surfaces are covered with hyaline cartilage. The glenoid cavity accepts little more than one-third of the humeral head, which is held in the cavity by the tone of the ROTATOR CUFF muscles.

The glenoid cavity accepts little more than one-third of the humeral head, which is held in the cavity by the tone of the ROTATOR CUFF muscles.

It completely involves the shoulder joint. It has fibers that attach to the margins of the glenoid cavity and, distally, to the anatomical neck of the humerus. 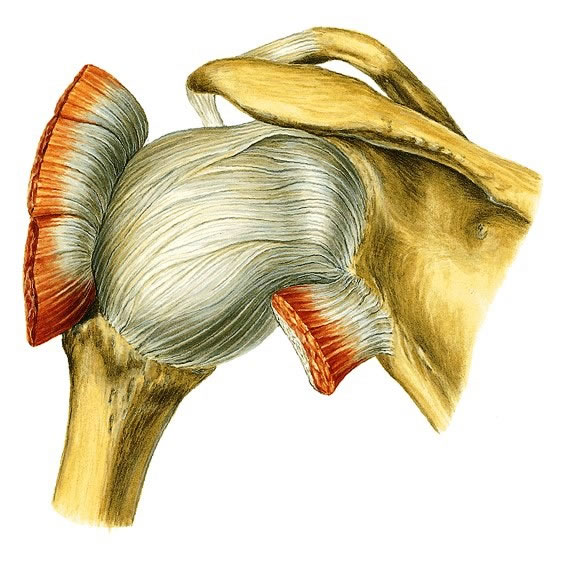 It has two openings:

– between the tubercles of the humerus: tendon of the long head of the biceps brachii;

– anteriorly below the coracoid process, allows communication between the subscapular bursa and the synovial cavity of the joint. 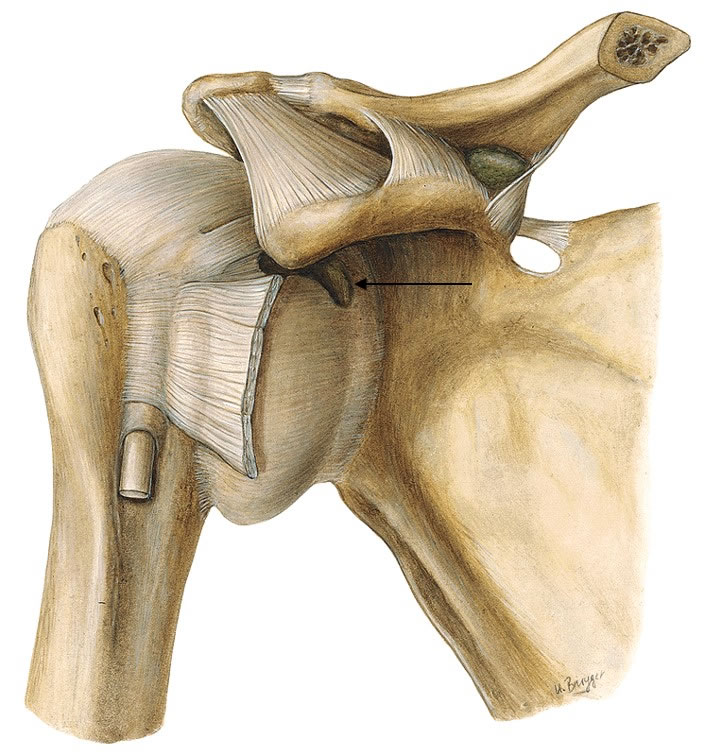 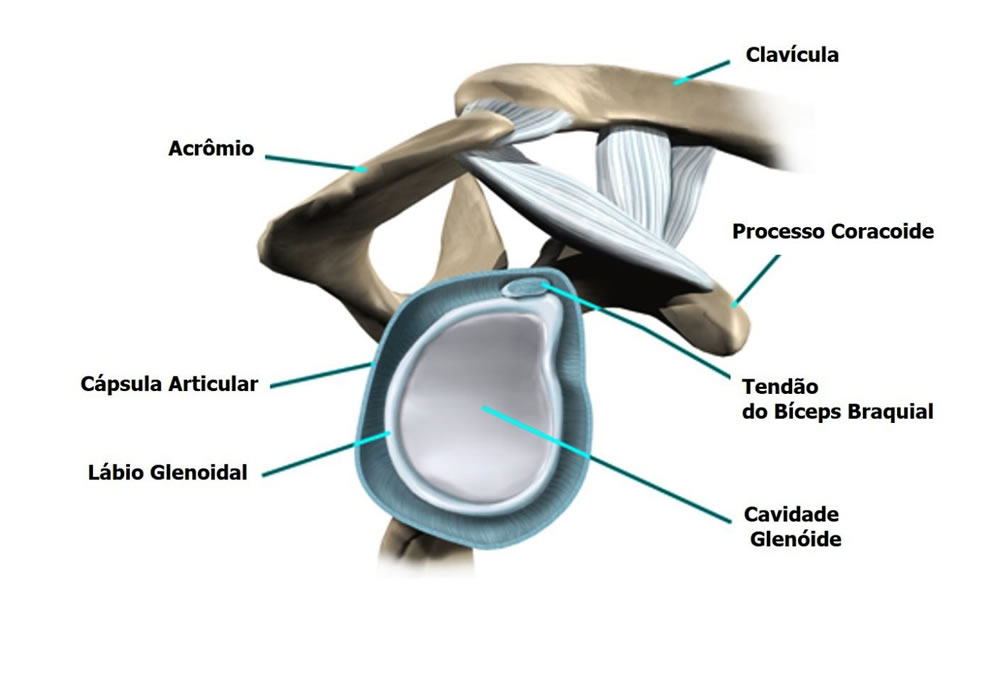 Alone, the capsule contributes little to the stability of the joint, being therefore necessary other structures that can help it in this function:

There are three capsular ligaments (obvious only on the inner surface of the capsule) that anteriorly reinforce the glenohumeral joint, being robust thickenings of the joint capsule on the ventral part of the joint. It consists of three ligaments:

In the form of a fibrous band of lateral direction, which extends from the coracoid process to the greater tubercle of the humerus, where it joins with the insertion of the supraspinatus tendon. 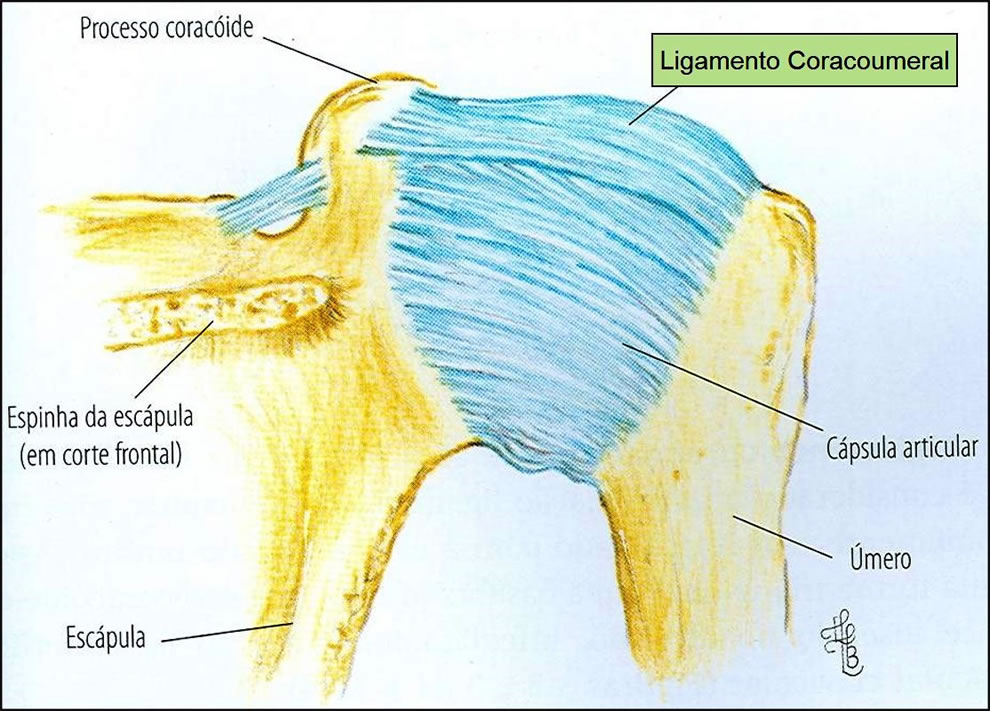 It is a narrow sheet of short, transverse fibers that join the greater and lesser tubercles of the humerus, keeping the long tendon of the biceps brachii in the intertubercular groove. 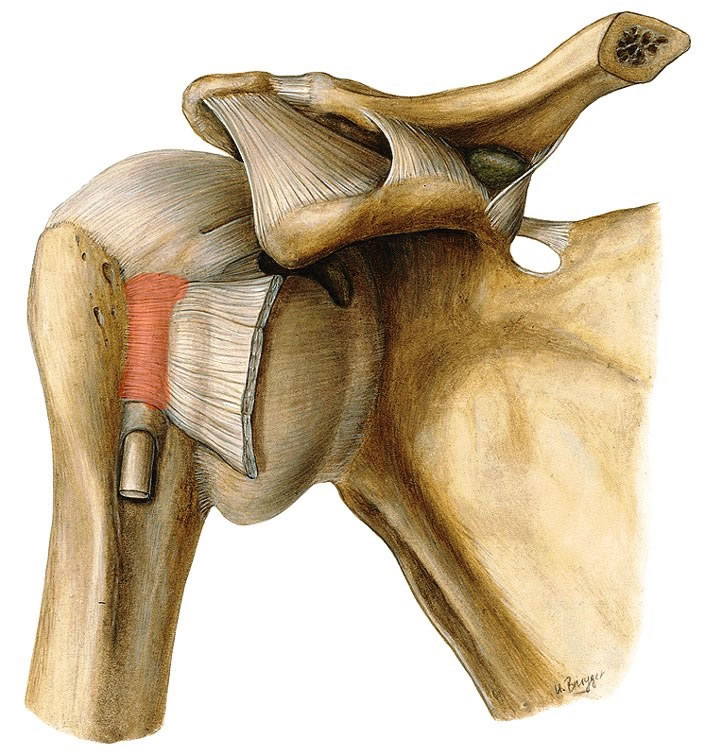 It is a ligament formation of the scapula, but functionally it is related to the shoulder joint. It has a triangular shape with the base fixed to the coracoid process and the apex inserted into the acromion, immediately below the clavicular joint surface. 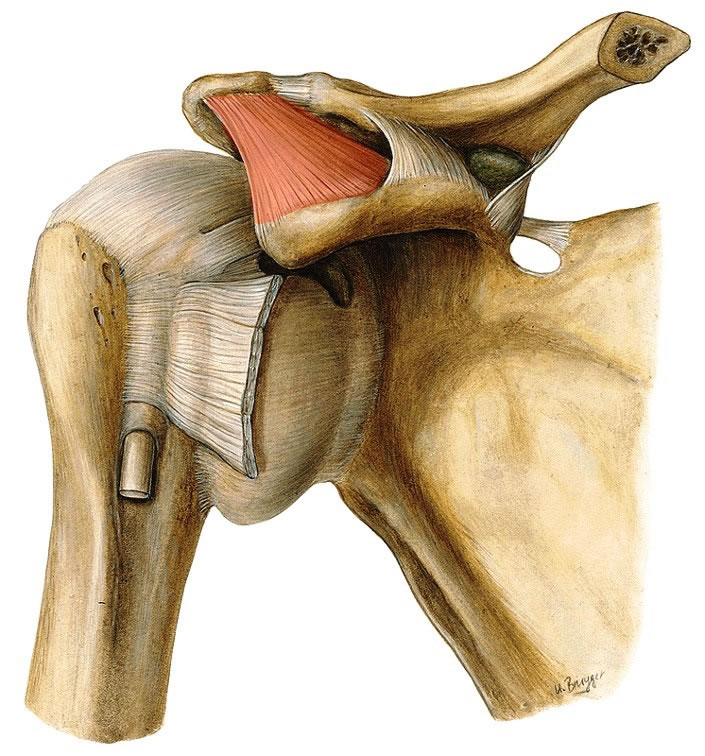 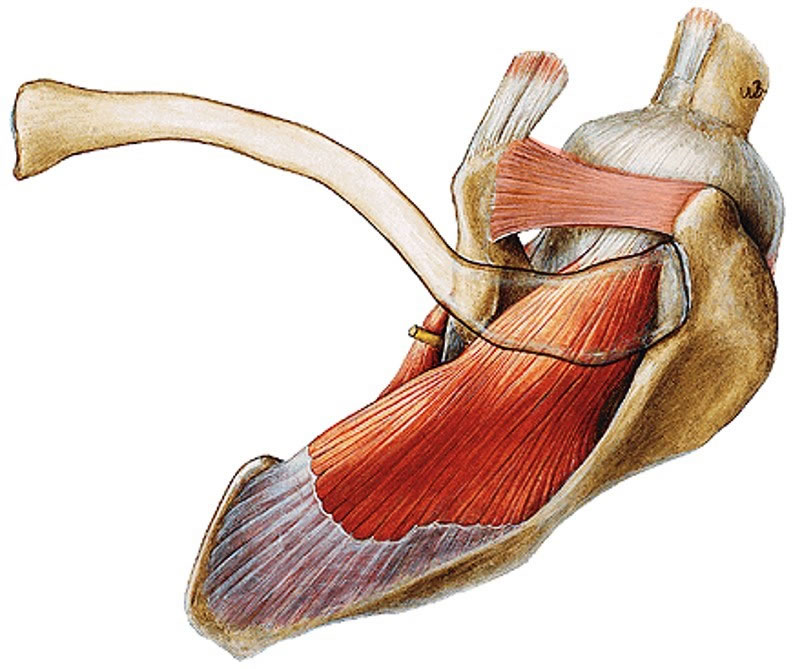 The pouches are located where tendons rub against bones, ligaments, and where skin moves over a bony prominence.

Scholarships are of special clinical importance. Some of them communicate with the joint cavity, for this reason, opening a pouch can mean entering the cavity of the glenohumeral joint. 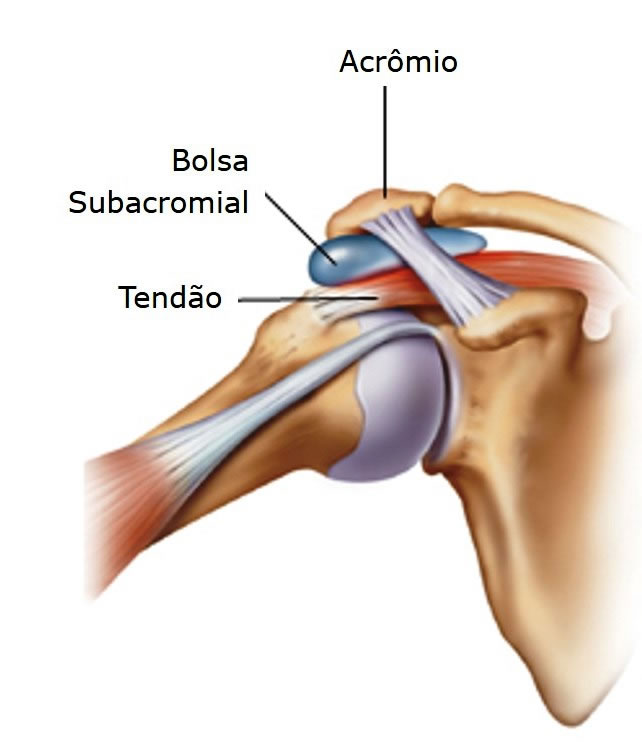 It is located between the tendon of the subscapularis muscle and the neck of the scapula. The pouch protects the tendon where it passes below the root of the coracoid process.

It communicates with the glenohumeral joint cavity through an opening in the fibrous capsule, so it is relatively an extension of this cavity. 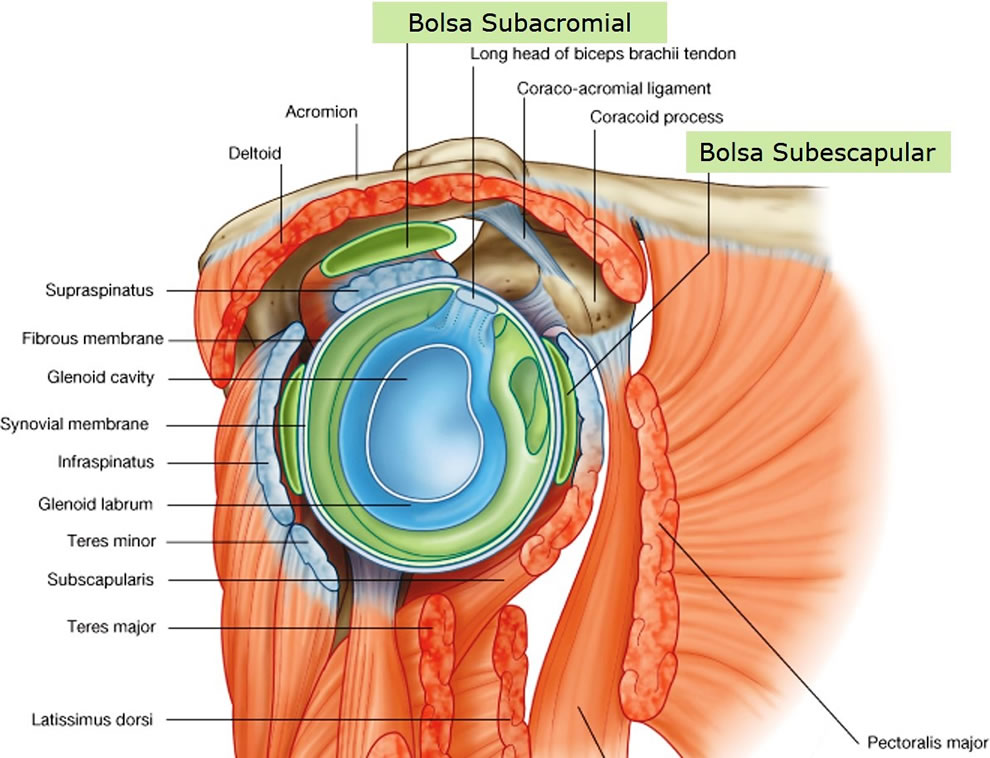 Also referred to as the SUBDELTOID POCKET , this large pouch lies between the deltoid, supraspinatus tendon, and fibrous capsule of the glenohumeral joint.

It facilitates movement of the supraspinatus tendon under the coracoacromial arch and the deltoid over the fibrous capsule of the shoulder joint and over the greater tubercle of the humerus. 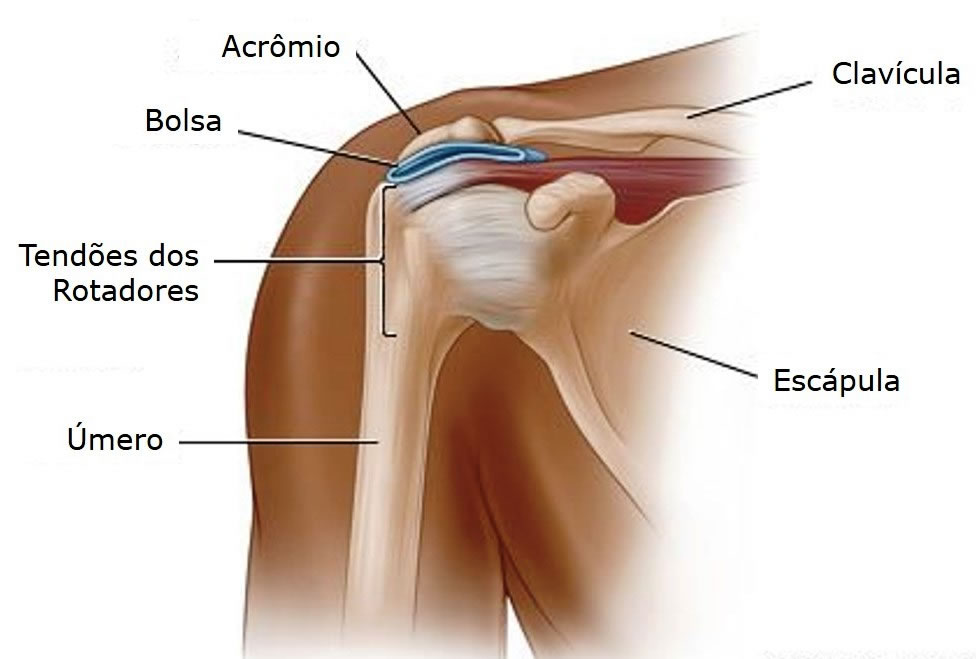 This joint, considered physiological, is located between the humeral head and the coracoacromial arch. 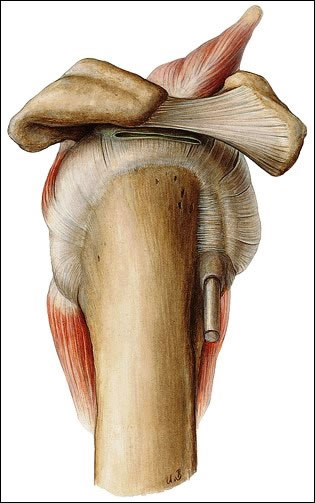 There are structures that pass within the space under this arch, which include:

The scapula makes contact with the thorax and moves over it through a physiological joint, the scapulothoracic joint, which is composed of the thoracic wall and the costal surface of the scapula, between which the subscapularis and serratus anterior muscles are found. 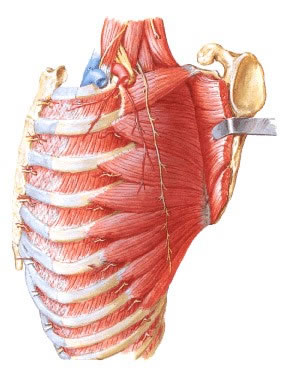 The scapulothoracic joint is NOT a true joint, but a sliding system of the inner surface of the scapula and the rib cage. Any irregularity on its inner surface can cause BUMPING and CREPITATION.

By elevating the humerus to 60° in the scapular plane, the scapula remains stable. Thereafter, the scapulohumeral rhythm is 2:1. In the first 60º of arm elevation, the scapula does NOT move; for the next 120 degrees, it rotates 60 degrees.

The scapula moves freely over the thorax without any ligament limitation, except for its single fixed point, about which it rotates, at the acromioclavicular joint.

The union of the scapula to the thorax is maintained by atmospheric pressure and the various muscles that attach to it.