The brainstem interposes between the medulla and the diencephalon, lying ventrally to the cerebellum, that is, it connects the spinal cord with the brain structures located superiorly. The white matter of the brain stem includes tracts that receive and send motor and sensory information to the brain and also provide it.

his knowledge. Scattered in the white matter of the brainstem are masses of gray matter called nuclei, which exert intense effects on functions such as blood pressure and respiration. In its constitution enter bodies of neurons that are grouped in nuclei and nerve fibers, which in turn, are grouped in bundles called tracts, fascicles or lemnisci.
Many of the nuclei of the brainstem receive or imitate nerve fibers that enter into the constitution of the cranial nerves. Of the 12 pairs of cranial nerves, 10 connect to the brain stem.

The brainstem is divided into: the medulla, situated caudally, the midbrain, and the pons located between them.

The medulla or medulla oblongata is shaped like a cone, the smaller end of which continues caudally with the spinal cord. As there is no line demarcating the separation between the medulla and the medulla, it is considered that the limit is in a horizontal plane that passes immediately above the most cranial root filament of the first cervical nerve, which corresponds to the level of the foramen magnum.

The upper limit of the bulb is made in a horizontal groove visible in the contour of this organ, the bulbopontine groove, which corresponds to the lower margin of the pons. The surface of the medulla is covered by two parallel grooves that continue into the medulla. These grooves delimit what is anterior and posterior in the medulla. Viewed from the surface, they appear as a continuation of spinal cord cords. The anterior median fissure ends cranially in a depression called the forme cecum.

On each side of the anterior median fissure is an eminence called the pyramid, formed by a compact bundle of descending nerve fibers that connect the motor areas of the brain to the motor neurons of the spinal cord. This tract is called the pyramidal tract or corticospinal tract.

In the caudal part of the medulla, the fibers of this tract obliquely cross the median plane and constitute the decussation of the pyramids. It is due to the decussation of the pyramids that the right cerebral hemisphere controls the left side of the body and the left cerebral hemisphere controls the right side. For example, in a right brain injury, the body will be affected in its entire left half.

These nuclei determine the appearance of two eminences: the more medial gracile tubercle and the more lateral cuneiform tubercle. By virtue of the IV ventricle, the gracile and cuneiform tubercles depart laterally as two branches of a “V” and gradually continue upward with the inferior cerebellar peduncle (restiform body). This is formed by a thick bundle of fibers that form the lateral borders of the caudal half of the IV ventricle, flexing dorsally to penetrate the cerebellum.

Because of its importance in relation to vital functions, the medulla is often called the vital center. Because these structures are fundamental to the body, you can understand the seriousness of a fracture at the base of the skull. The bulb is also extremely sensitive to certain drugs, especially narcotics. An overdose of the narcotic causes bulb depression and death because the person stops breathing.

Ponte is the part of the brainstem interposed between the medulla and the midbrain. It is situated ventrally to the cerebellum and rests on the basilar part of the occipital bone and the dorsum of the sella turcica of the sphenoid. Its ventrally located base presents a transverse striation due to the presence of numerous bundles of transverse fibers that run through it. 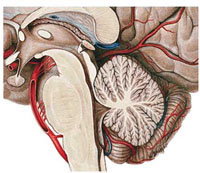 pontine, from which the VI, VII and VIII cranial nerves emerge on each side from the midline.

Sensory Nuclei of the Trigeminal Nerve (V cranial nerve) – cephalic continuation of the sensory column of the spinal cord. Fibers entering the pons from the trigeminal ganglion divide into ascending and descending branches.

Abducens Nerve Nucleus (cranial nerve VI) – forms part of the dorsal gray matter of the medial eminence of the floor of the fourth ventricle, deep to the facial colliculus.

Facial Nerve Nucleus (VII Cranial Pair) – is situated deep in the reticular formation, lateral to the abducens nerve nucleus. They emerge at the edge of the caudal between the olive and the inferior cerebellar peduncle.

Fourth Ventricle : It is located between the medulla and the pons on its posterior surface and ventrally to the cerebellum. It continues caudally with the central canal of the medulla and cranially with the cerebral aqueduct, the midbrain cavity that communicates the III and IV ventricles. The cavity of the fourth ventricle extends on each side to form the lateral recesses situated on the dorsal surface of the inferior cerebellar peduncle.

The floor of the IV ventricle, or rhomboid fossa, is formed by the dorsal part of the pons and the open portion of the medulla.

IV Ventricle Roof : The cranial half of the IV ventricle roof is made up of a thin sheet of white matter, the superior medullary velum, which extends between the two superior cerebellar peduncles. In the constitution of the caudal half we have the following formations:

A small part of the white matter of the cerebellar nodule.

The inferior medullary velum, bilateral formation consisting of a thin white sheet attached medially to the lateral edges of the cerebellar nodule.

The choroidal screen is formed by the union of the ependymal epithelium, which internally lines the ventricle with the pia mater and externally reinforces this epithelium. This screen emits irregular and highly vascularized projections for the formation of the choroid plexus of the fourth ventricle. This choroid plexus is T-shaped and produces cerebrospinal fluid, which accumulates in the ventricular cavity passing into the subarachnoid space through the lateral and median openings of the fourth ventricle.

The pons plays a key role in regulating the breathing pattern and rhythm. Injuries to this structure can cause serious disturbances in respiratory rhythm.

It interposes between the pons and the brain, of which it is represented by a plane that connects the two mammillary bodies, belonging to the diencephalon, to the posterior commissure. It is crossed by a narrow channel, the cerebral aqueduct. The part of the midbrain situated dorsal to the aqueduct is the roof of the midbrain. Ventrally, we have the two cerebral peduncles, which in turn are divided into a dorsal part, the tegmentum, and a ventral part, the base of the peduncle. 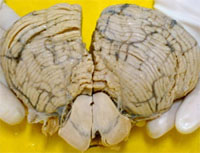 In a cross-section of the midbrain, the tegmentum is seen to be separated from the base by a dark area, the substantia nigra (nigra). Next to the substantia nigra there are two longitudinal grooves: one lateral, the lateral sulcus of the midbrain, and the other medial, the medial sulcus of the cerebral peduncle. These grooves mark the boundary between the base and the tegmentum of the cerebral peduncle. From the medial sulcus emerges the oculomotor nerve, 3rd cranial nerve.

Midbrain roof: in dorsal view, the midbrain roof has four rounded eminences called superior and inferior colliculi, separated by two perpendicular cross-shaped grooves. In the anterior part of the longitudinal branch of the cross, the pineal body, which belongs to the diencephalon, is housed. Caudally to each inferior colliculus emerges the fourth cranial nerve, the trochlear nerve.

Cerebral Peduncles: Viewed ventrally, the cerebral peduncles appear with two large fiber bundles that arise at the upper edge of the pons and diverge cranially to penetrate deep into the brain. Thus, they delimit a deep triangular depression, the interpeduncular fossa, limited anteriorly by two eminences belonging to the diencephalon, the mammillary bodies. The bottom of the interpeduncular fossa has small holes for the passage of vessels. It is called posterior perforated substance.

Red nucleus – occupies a large part of the tegmentum. It is an oval-shaped mass that extends from the caudal limit of the superior colliculus to the subthalamic region. It is circular in cross section.

Nucleus of the Mesencephalic Root of the Trigeminal Nerve (cranial nerve V) – forms a dispersed region in the lateral portion of the central gray matter that surrounds the aqueduct.

Trochlear Nerve Nucleus (cranial nerve IV) – is at the level of the inferior colliculus.