The TMJ is a synovial joint of the hinge type, being considered a unique joint in the human body.

The articular surfaces involved are: 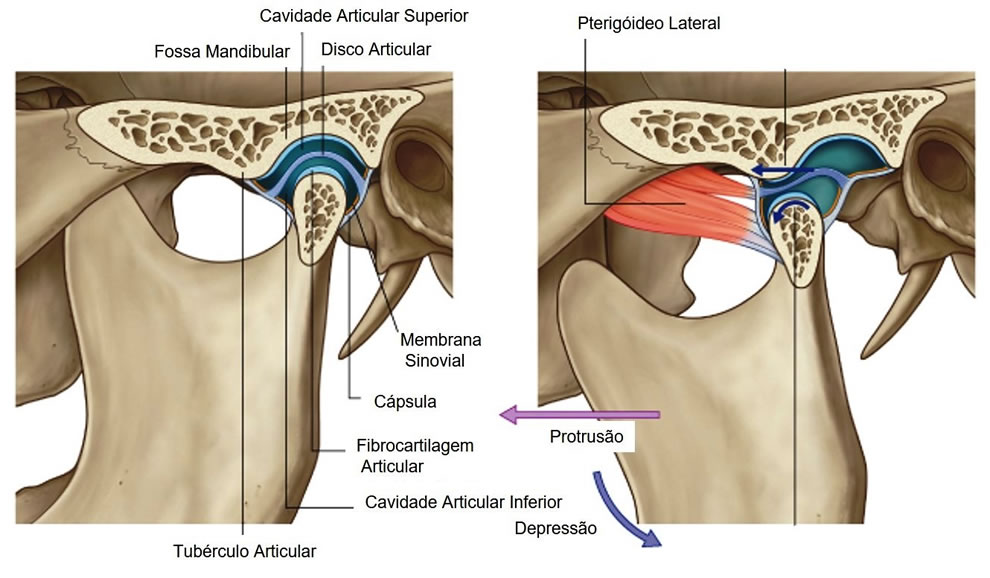 In addition to the two distinct joints, each TMJ has a disc that separates it into two other joints: an upper and a lower one.

The presence of the articular disc allows the TMJ to develop unique movements. 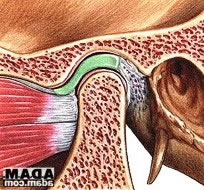 The TMJ on one side does not work without the other and all mandibular movements involve both.

The TMJ is governed by the same orthopedic principles as synovial joints and may present pathologies common to it.

Fibrocartilage has greater strength and ability to repair and regenerate than hyaline cartilage. 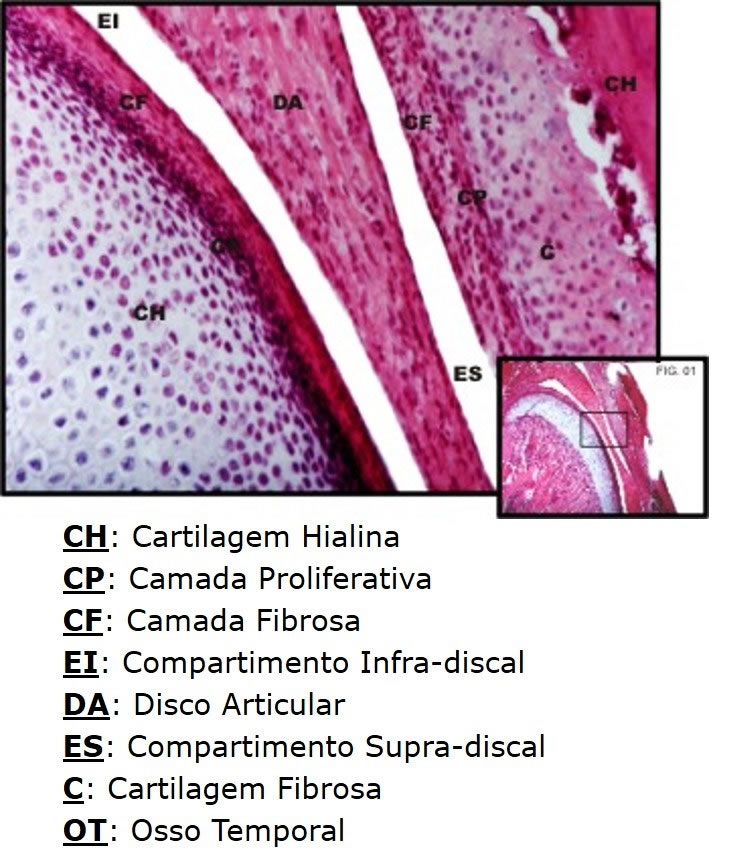 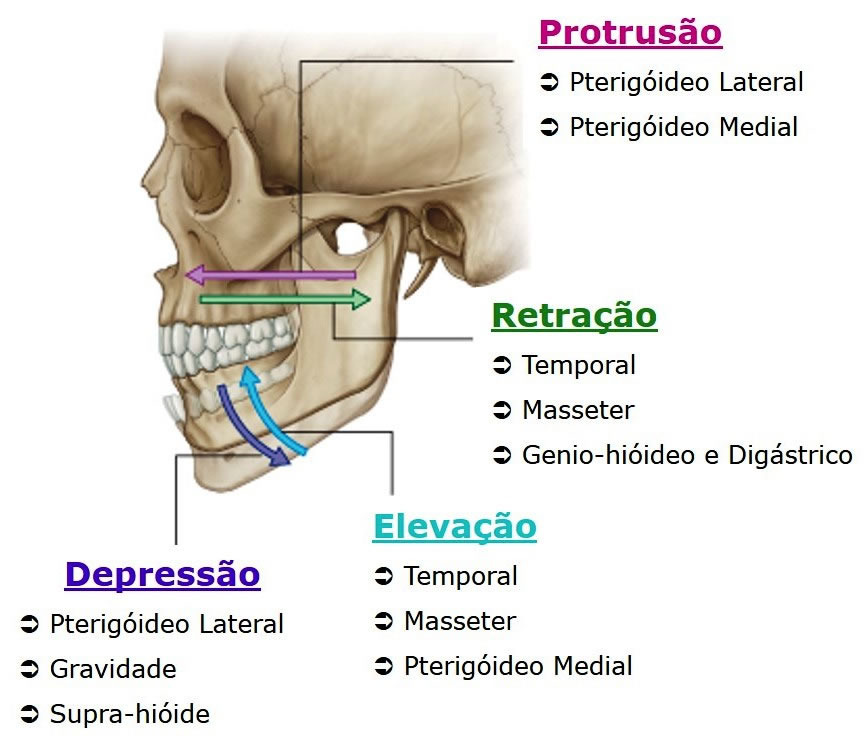 The TMJ is covered along its entire length by a fibrous capsule that is attached to the margin of the articular area in the temporal and around the neck of the mandible. 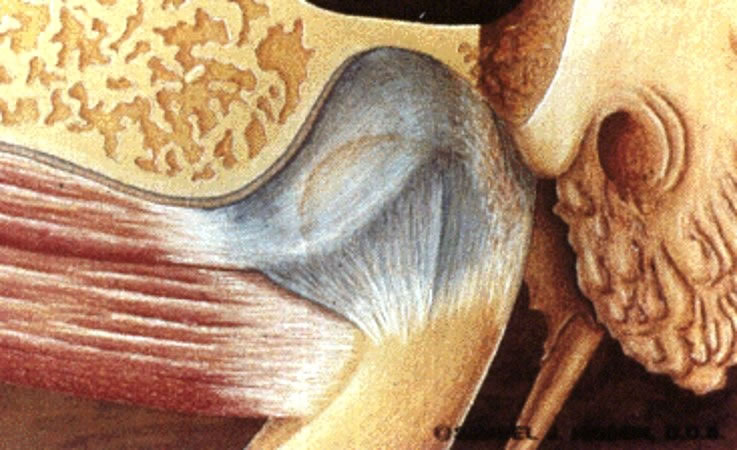 The capsule and disc are attached to each other anteriorly and posteriorly, but not medially and laterally.

Since there are no medial or lateral insertions of the disc and capsule, translational movement of the disc within the capsule may occur.

The capsule is very thin and loose in its anterior, medial and posterior aspects, but the lateral aspect is thicker and more resistant, being reinforced by the Tempomandibular Ligament. 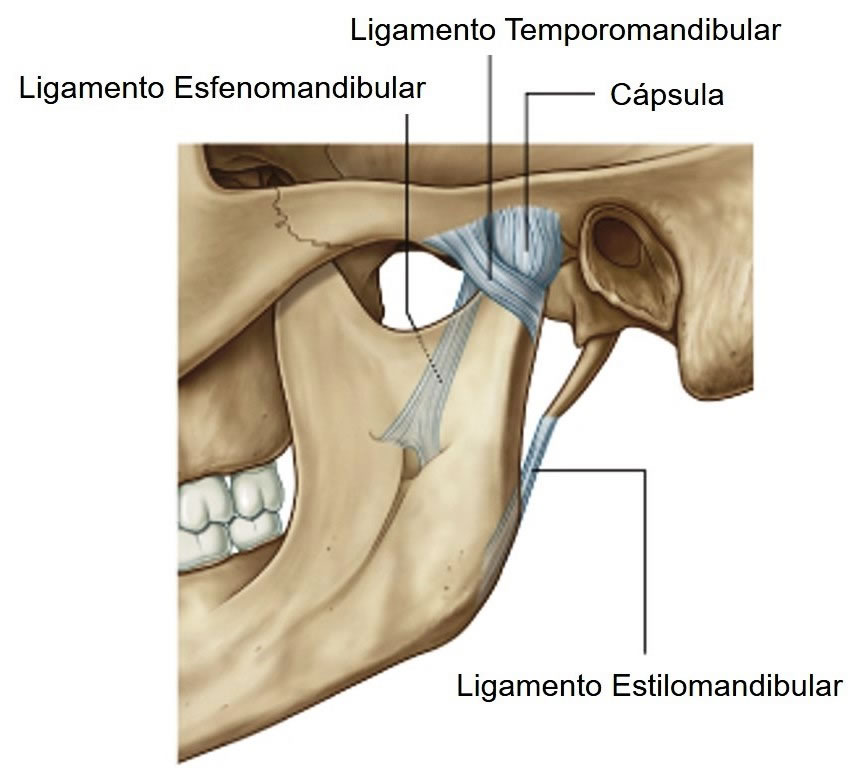 The capsule is highly vascularized and innervated, which allows this structure to provide a great deal of information about its position and movement.

The joint has two synovial membranes.

The superior synovial membrane lines the fibrous capsule above the articular disc.

The inferior synovial membrane lines the capsule below the disc 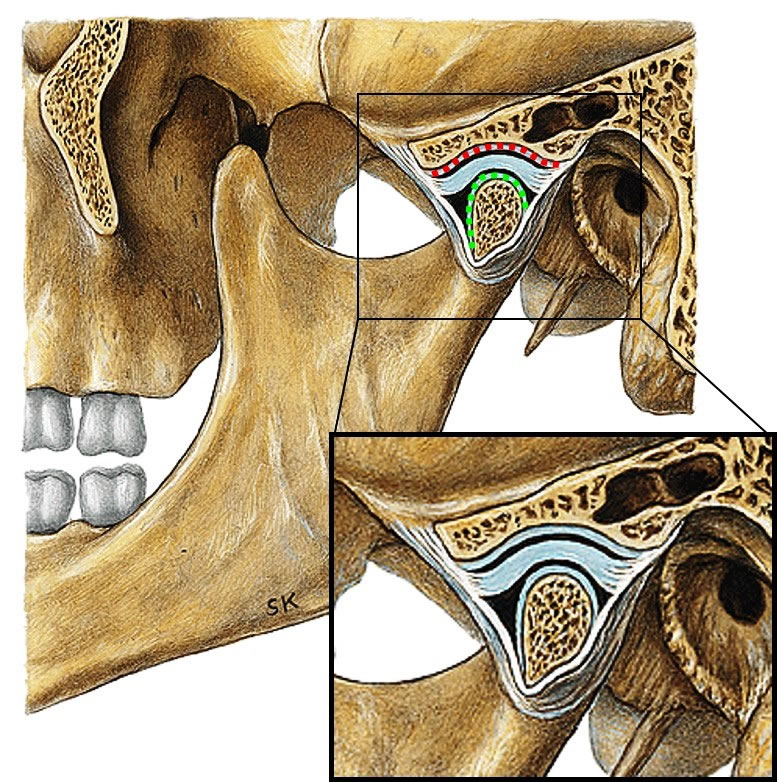 It is a thin, ovulated plate situated between the condyle of the mandible and the mandibular fossa. The disc is biconcave, that is, both its upper and lower surfaces are concave.

An oval sheet of fibrous tissue divides the joint into two separate compartments.

The upper surface of the disc is concave to fit the articular tubercle and the mandibular fossa.

The lower surface of the disc is concave to adapt to the condyle of the mandible.

The disc is firmly attached to the medial and lateral poles of the condyle of the mandible, ensuring that the disc and condyle move together in protraction and retraction. 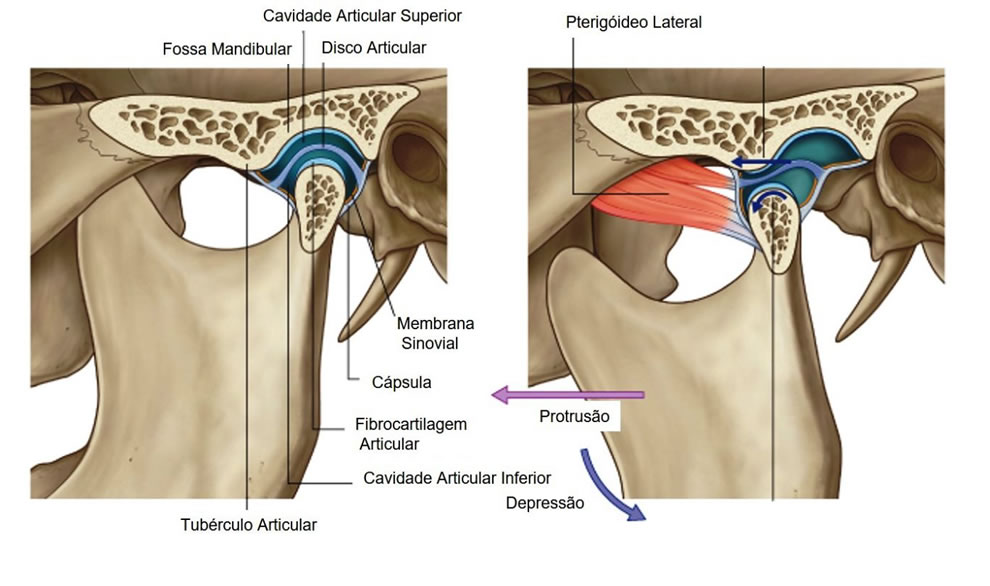 However, the disc is not attached to the joint capsule laterally or medially.

Anteriorly, the disc is attached to the joint capsule and the fibers of the superior head of the lateral pterygoid muscle. 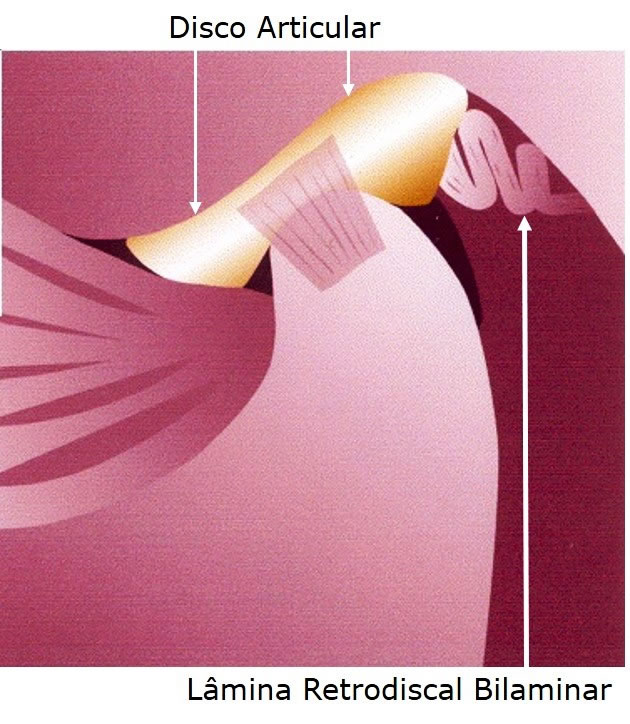 Subsequently, the disc has complex attachments that are collectively called the bilaminar retrodiscal pad. 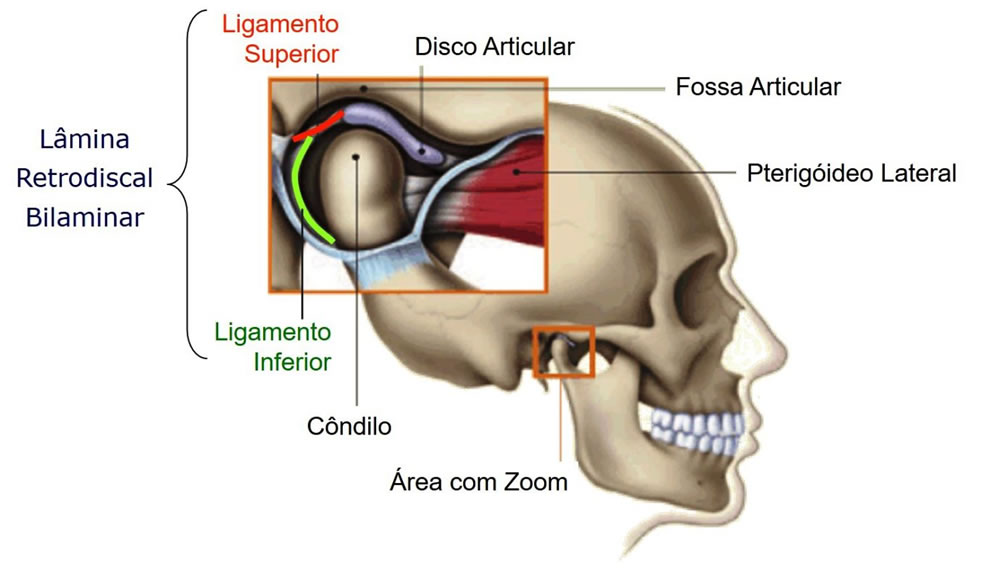 Two tracks are later attached to the disc.

The upper band, also called stratum or lamina, is made up of elastic fibers that allow some stretching. This band is inserted into the posterior margin of the fossa.

The inferior lamina is inelastic, inserting into the neck of the condyle.

The superior lamina allows the disc to translate forward along the articular tuberosity during mouth opening. Its elastic properties help in the replacement of the disc, in its posterior translation, during the closing of the mouth.

The lower blade simply serves as a lock on the disc, limiting forward translation, but does not help with disc replacement during muzzle closure. 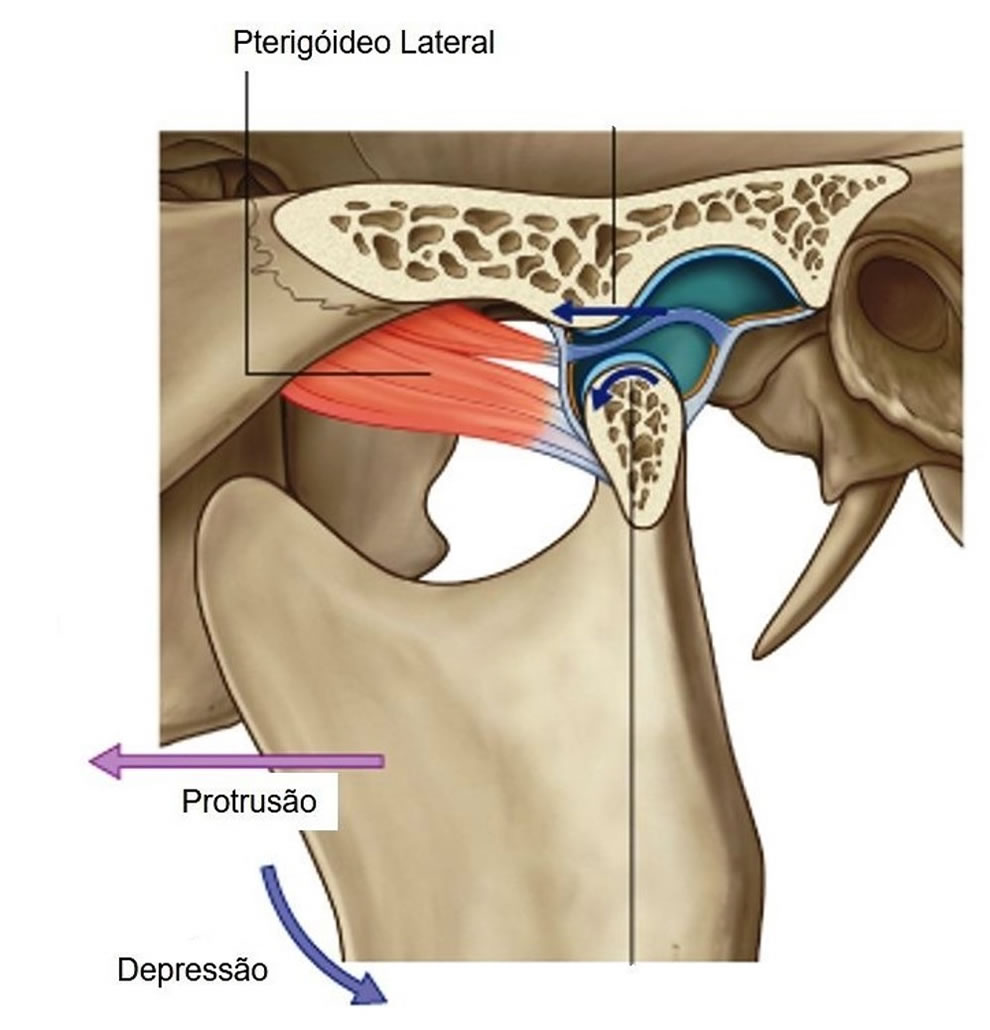 Macroscopic Aspects of the Articular Disc 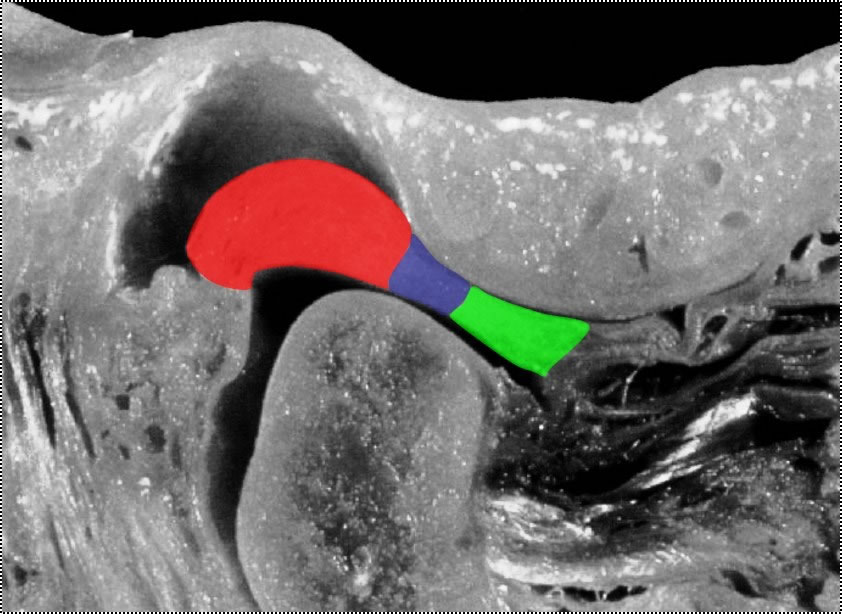 The absence of vascularity and innervation is consistent with the observation that the middle part is the force-receiving surface of the disc.

This arrangement allows the disc to adapt to the bony surfaces with which it articulates, and creates greater congruence of the joint surfaces.

The upper joint is the larger of the two. Each joint has its own synovial lining. 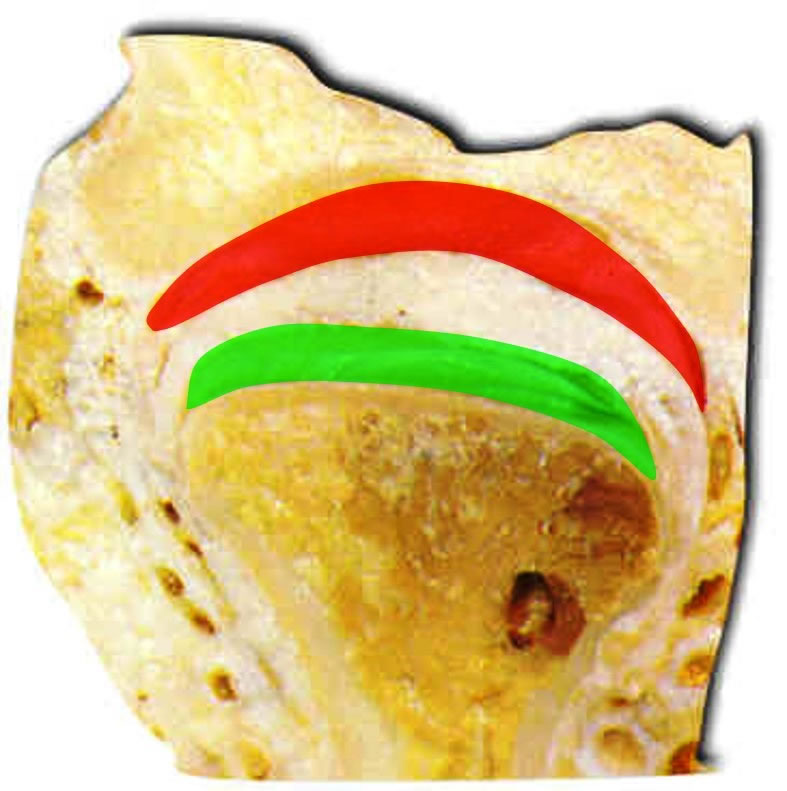 All joint surfaces, except the articular surfaces, are covered with a synovial membrane.

Nutrition for the fibrocartilage that lines the joint surfaces and the middle portion of the disc is provided by synovial fluid.

Intermittent pressure from these collagenous structures during joint movement causes fluid to be pumped in and out of the joints, which provides them with nutrition.

The condyle and disc are firmly attached to the medial and lateral poles of the condyle.

These inserts allow free rotation of the disc over the condyle, or of the condyle under the disc.

The firm medial and lateral attachments make the disc and condyle slide as one unit. There is minimal translation between the two structures.

The superior TMJ joint is a sliding or amphiarthrodial joint, formed by the articular eminence of the temporal bone and the superior surface of the disc.

The middle portion of the disc is the disc articular surface, which translates forward with the condyle during mouth opening so that contact is maintained with the articular eminence.

The TM Ligament is a tough ligament and serves as a ligamentous reinforcement of the joint capsule.

It consists of two parts:

The external oblique portion attaches to the neck of the condyle and the articular tuberosity. This part serves as a suspensory ligament and limits downward and backward movement of the mandible, as well as rotation of the condyle during mouth opening.

This serves to protect the retrodiscal pad. None of these bands limit forward translation of the condyle or disc, but effectively limit lateral displacement. 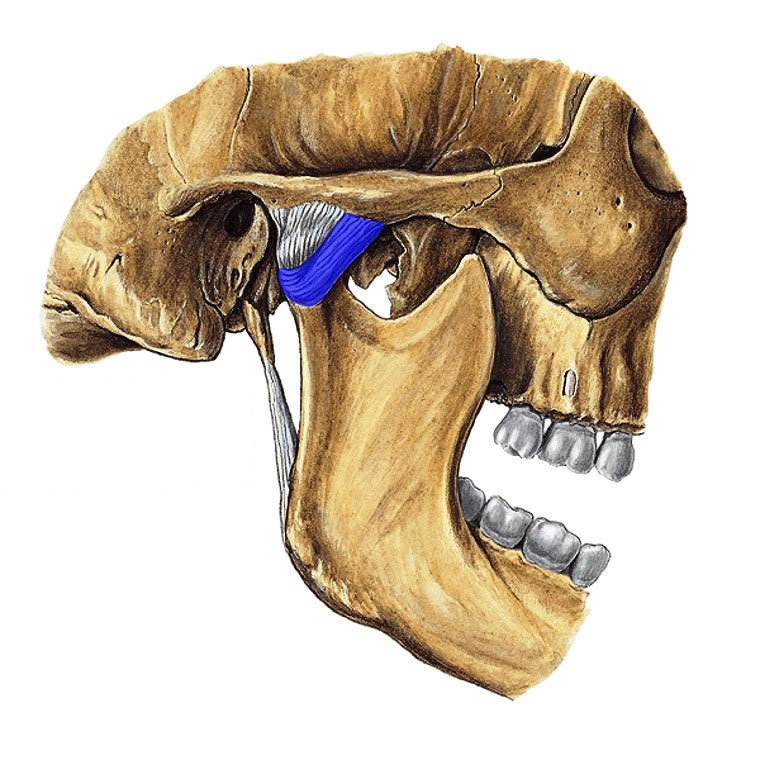 It is a bundle of deep cervical fascia, advancing from the styloid process of the temporal bone to the posterior border of the ramus of the mandible.

This ligament inserts between the masseter and medial pterygoid muscles. It separates the parotid from the submandibular gland.

Its apparent function is controversial; some authors indicate that this structure limits the protrusion of the mandible, while others state that the ligament has no function. 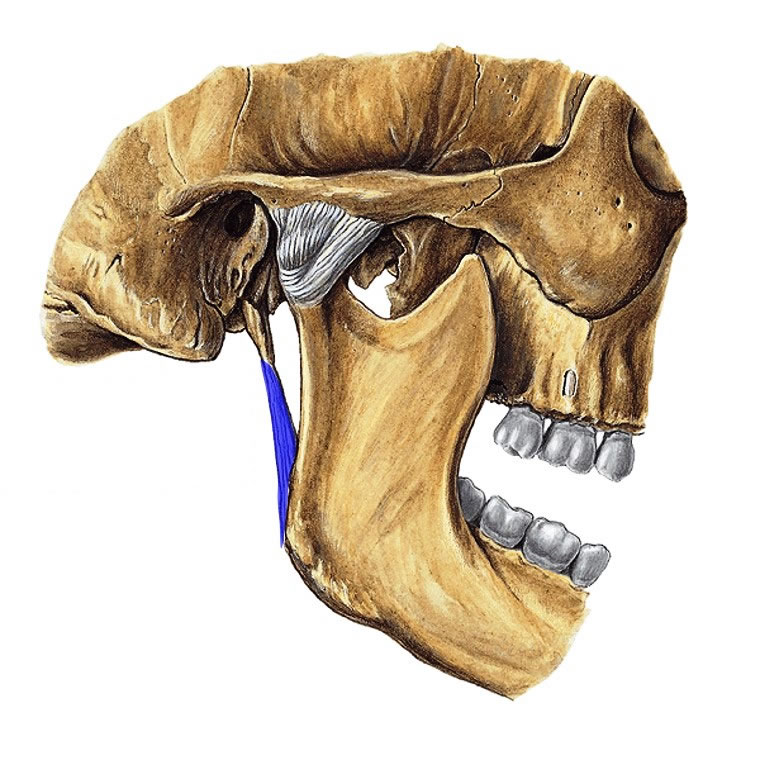 It is a thin, flat band that is located medial to the capsule. It is an accessory ligament, has its insertion between the sphenoid and the middle portion of the rami of the mandible.

It is the primary passive support of the jaw, although masticatory muscle tone normally supports the weight of the jaw. 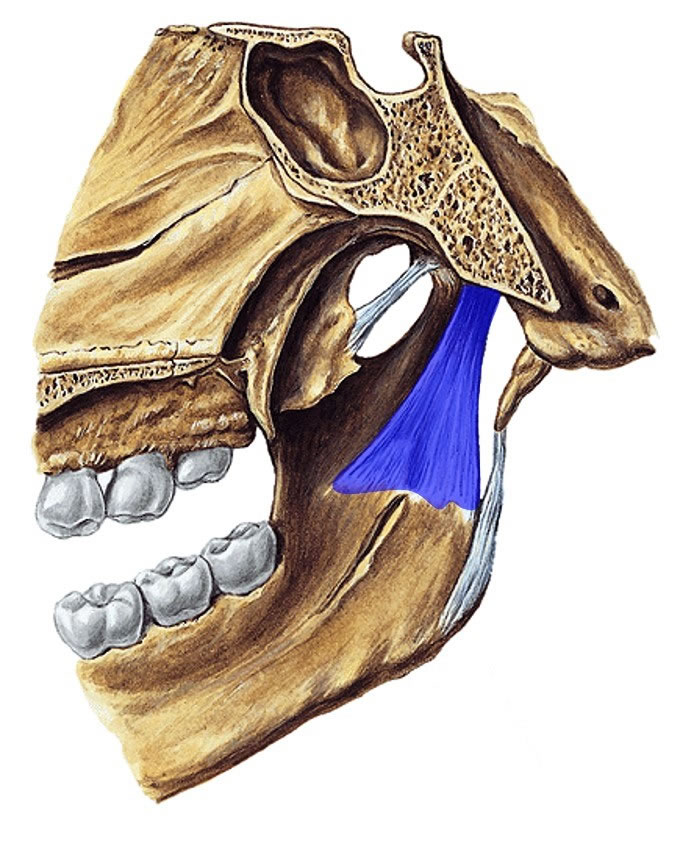 The temporomandibular joint muscles, their functions, insertions and their descriptions are highlighted in the muscular system