For all its potency, the cone-shaped heart is relatively small, roughly the size of a closed fist, about 12 cm long, 9 cm wide at its widest part and 6 cm thick. Its mass is, on average, 250 g in adult women and 300 g in adult men. 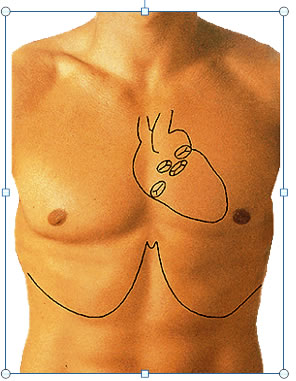 prayer rests on the diaphragm, near the midline of the thoracic cavity, in the mediastinum, the mass of tissue that extends from the sternum to the spine; and between the linings (pleuras) of the lungs. About 2/3 of the cardiac mass lies to the left of the midline of the body. The position of the heart in the mediastinum is most easily appreciated by examining its extremities, surfaces, and boundaries. The pointed end of the heart is the apex , directed forward, downward, and to the left. The widest portion of the heart, opposite the apex, is the base , directed backwards, upwards, and to the right. 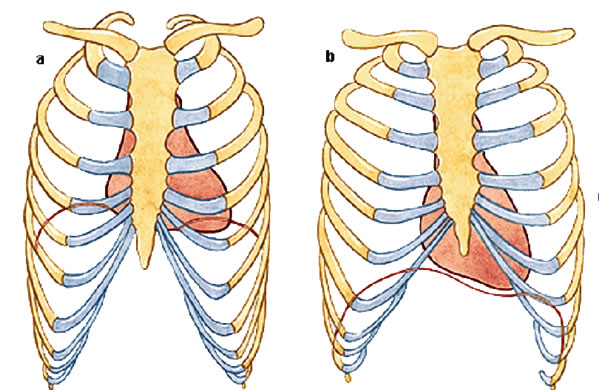 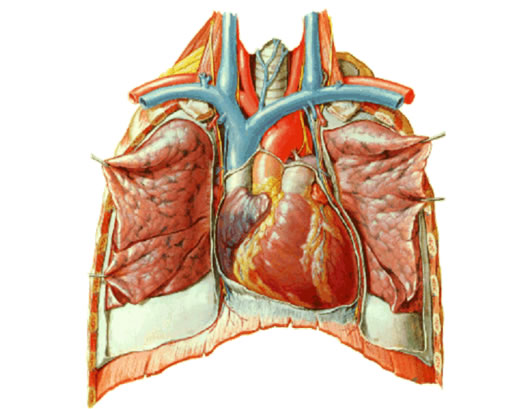 Heart Limits : The anterior surface is just below the sternum and ribs. The inferior surface is the part of the heart that, for the most part, rests on the diaphragm, corresponding to the region between the apex and the right approach. The right edge faces the right lung and extends from the inferior surface to the base; the left border, also called the pulmonary border, faces the left lung, extending from the base to the apex. The upper limit is the great vessels of the heart and posteriorly the trachea, esophagus and descending aorta artery. 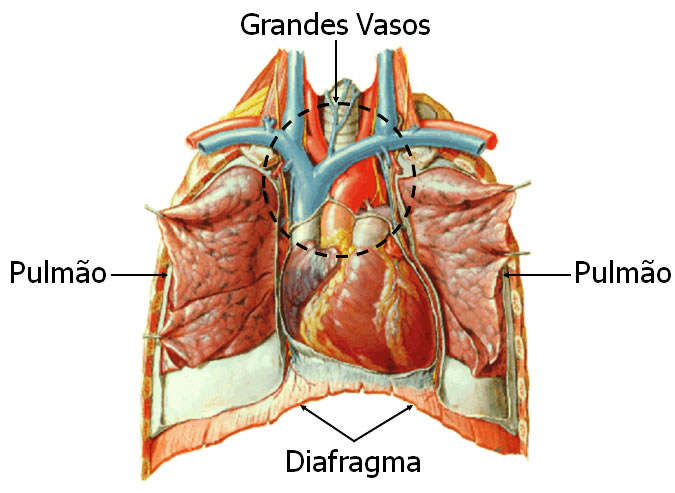 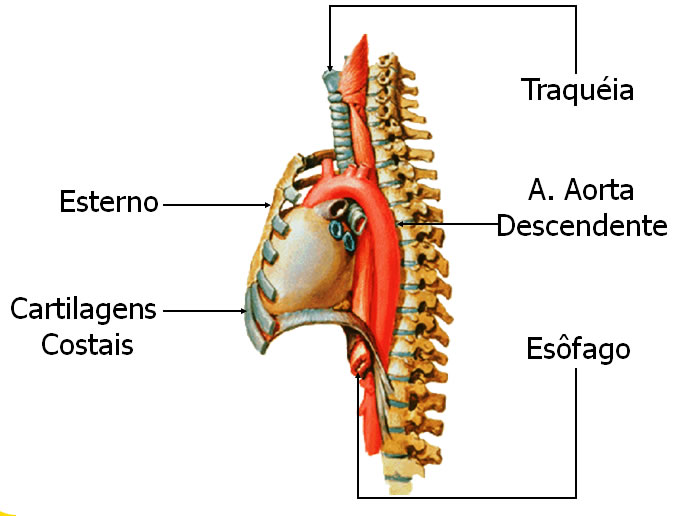 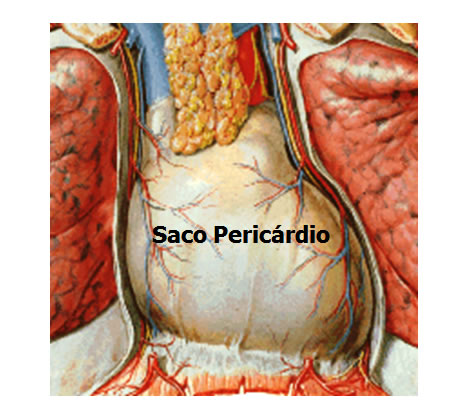 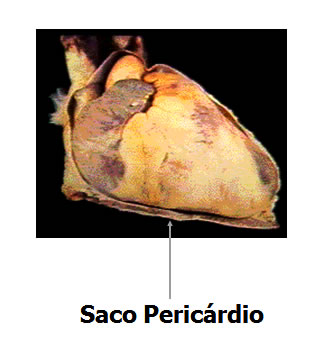 The superficial fibrous pericardium is an irregular, dense, tough and inelastic connective tissue. It resembles a bag, which rests on and attaches to the diaphragm.

Myocardium : It is the middle and thickest layer of the heart. It is composed of cardiac striated muscle. It is this type of muscle that allows the heart to contract and therefore push blood, or force it into the blood vessels.

Endocardium : It is the innermost layer of the heart. It is a thin layer of tissue composed of simple squamous epithelium over a layer of connective tissue. The smooth, shiny surface allows blood to flow easily over it. The endocardium also lines the valves and is continuous with the lining of the blood vessels that enter and leave the heart. 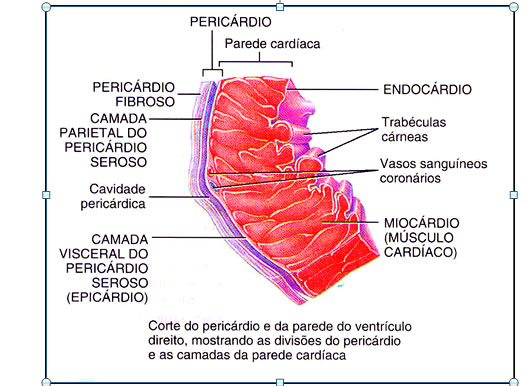 The heart has three faces and four edges: 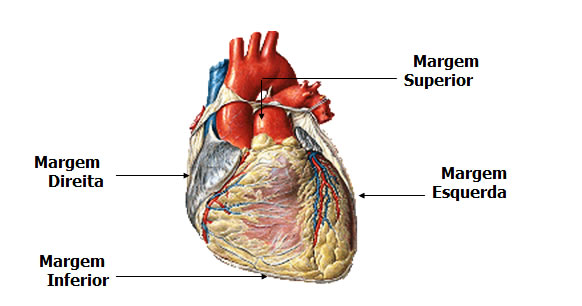 This groove is occupied by the posterior interventricular vessels.

The posterior interventricular sulcus starts from the coronary sulcus and descends towards the notch of the apex of the heart. 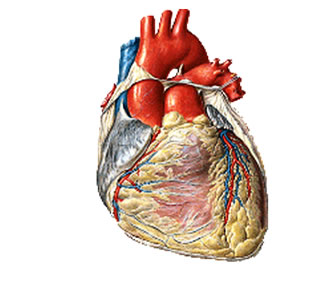 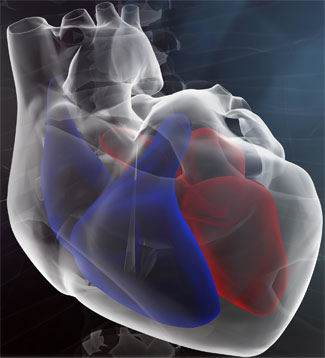 The heart has four chambers: two atria and two ventricles. The Atria (the upper chambers) receive blood; Ventricles (lower chambers) pump blood out of the heart

On the anterior surface of each atrium is a wrinkled, sac-shaped structure called the auricle (similar to a dog's ear). 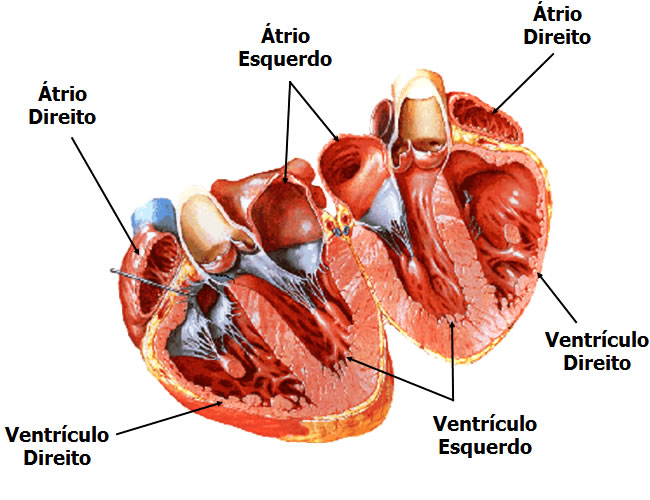 While the posterior wall of the right atrium is smooth, the anterior wall is rough, due to the presence of muscular crests, called pectinate muscles.

Blood passes from the right atrium to the right ventricle through a valve called the tricuspid (formed by three leaflets – valves or cusps).

On the medial wall of the right atrium, which is constituted by the interatrial septum, we find a depression that is the fossa ovale.

The left atrium is a thin-walled cavity, with smooth anterior and posterior walls, which receives already oxygenated blood; through four pulmonary veins. Blood passes from the left atrium to the left ventricle through the bicuspid (mitral) valve, which has only two cusps.

The right ventricle forms most of the anterior surface of the heart. Its interior features a series of elevated bundles of cardiac muscle fibers called fleshy trabeculae.

In the right atrioventricular ostium there is a device called the Tricuspid Valve that serves to prevent blood from returning from the ventricle to the right atrium. This valve consists of three membranous, whitish and irregularly triangular laminae, with a base implanted on the edges of the ostium and the apex directed downwards and attached to the walls of the ventricle by means of filaments.

Each blade is called a cusp. We have an anterior, a posterior and a septal cusp.

The apex of the cusps is held by filaments called chordae tendineae , which insert into small fleshy columns called papillary muscles .

The pulmonary trunk valve is also made up of small sheets, but these are arranged in a shell, called semilunar valves (anterior, left and right). 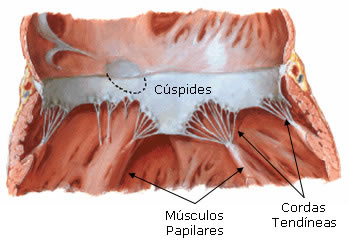 In the center of the free edge of each of the valves we find small nodules called semilunar (pulmonary) valve nodules.

The left ventricle forms the apex of the heart. In the left atrioventricular ostium, we find the left atrioventricular valve, consisting only of two sheets called cusps (anterior and posterior). These valves are called bicuspid. Like the right ventricle, it also has fleshy trabeculae and chordae tendineae, which attach the bicuspid valve cusps to the papillary muscles.

Blood passes from the left atrium to the left ventricle through the left atrioventricular orifice where the Bicuspid (mitral) valve is located. From the left ventricle, the blood goes to the largest artery in the body, the ascending aorta, passing through the Aortic Valve – consisting of three semilunar valves: right, left and posterior. From there, part of the blood flows to the coronary arteries, which branch off from the ascending aorta, carrying blood to the heart wall; the rest of the blood passes into the arch of the aorta and the descending aorta (thoracic aorta and abdominal aorta). Branches of the arch of the aorta and the descending aorta carry blood throughout the body.

A single cardiac cycle includes all events associated with a heartbeat. In the normal cardiac cycle, the two atria contract, while the two ventricles relax, and vice versa. The term systole designates the phase of contraction; the relaxation phase is called diastole. 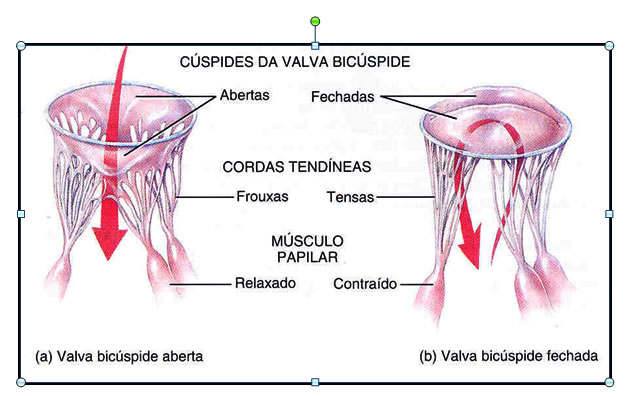 When the heart beats, the atria first contract (atrial systole), forcing blood into the ventricles. Once filled, the two ventricles contract (ventricular systole) and force blood out of the heart. 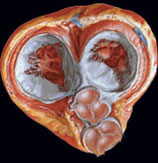 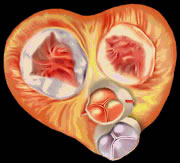 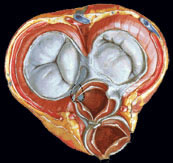 For the heart to be efficient in its pumping action, it takes more than the rhythmic contraction of its muscle fibers. The direction of blood flow must be guided and controlled, which is achieved by four valves mentioned above: two located between the atrium and ventricle – atrioventricular (tricuspid and bicuspid valves); and two located between the ventricles and the great arteries that carry blood out of the heart – semilunar (pulmonary and aortic valves). Complement: The valves and valves are to prevent this abnormal behavior of the blood, to prevent backflow from occurring they close after the passage of blood. 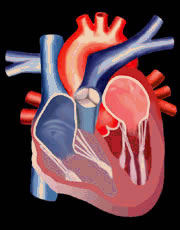 In conclusion, we can say that the cardiac cycle comprises:
1- Atrial systole
2- Ventricular systole
3- Ventricular diastole 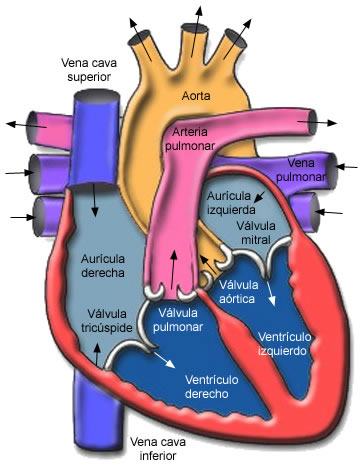 The artery, immediately after its origin, goes to the coronary sulcus, traveling it from right to left, until it anastomoses with the circumflex branch, which is the terminal branch of the left coronary artery that continues this artery, encircling the sulcus. coronary.

The Left Coronary Artery initially passes through a branch behind the pulmonary trunk to reach the coronary sulcus, evident near the apex of the left atrium.

Soon after, it emits an anterior interventricular branch and a circumflex branch that gives rise to the left marginal artery.

On the diaphragmatic surface, the two arteries anastomose, forming a circumflex branch.

Venous blood is collected by several veins that empty into the great vein of the heart, which starts at the apex of the heart, ascends the anterior interventricular sulcus and follows the coronary sulcus from left to right, passing through the diaphragmatic surface, to empty into the atrium. right.

The terminal portion of this vessel, represented by its last 3 cm, forms a dilatation that is called the coronary sinus.

There are also minimal, very small veins, which flow directly into the heart cavities.

Extrinsic innervation derives from the autonomic nervous system, that is, sympathetic and parasympathetic.

The intrinsic innervation or conduction system of the heart is the reason for the continuous beating of the heart. It is an electrical activity, intrinsic and rhythmic, which originates in a network of specialized cardiac muscle fibers, called auto-rhythmic cells (cardiac pacemakers), because they are self-excitable. 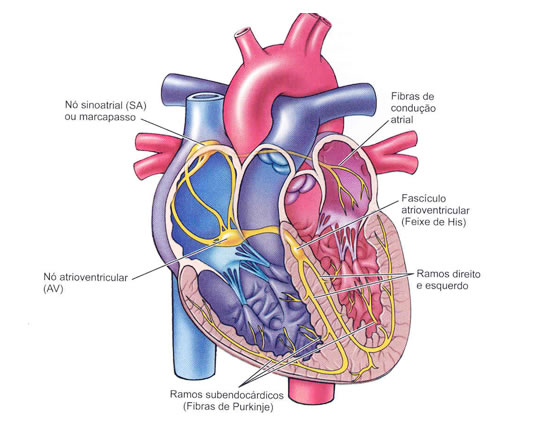 Diastole is the relaxation of the heart muscle, it is when the ventricles fill with blood, at this moment the atrioventricular valves are open and the semilunar valves are closed.