The tissue of the CNS is very delicate. For this reason, it has an elaborate protection system that consists of four structures: skull, meninges, cerebrospinal fluid (cerebrospinal fluid) and blood-brain barrier. On this page, we will discuss the meninges and the cerebrospinal fluid, structures that surround the CNS and are extremely important for the defense of our body. 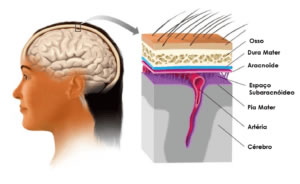 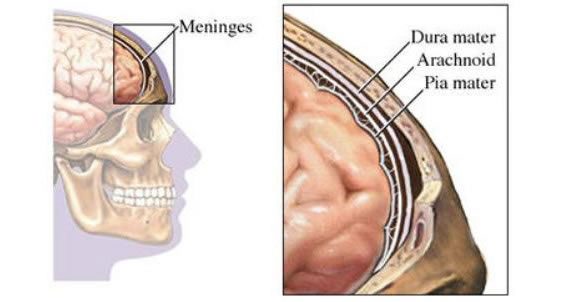 It is the most superficial, thick and resistant meninges, formed by connective tissue very rich in collagen fibers, containing nerves and vessels.

It consists of two leaflets: one external and one internal. The outer layer adheres closely to the bones of the skull and behaves like a periosteum of these bones, but without osteogenic capacity (in skull fractures, it makes it difficult to form a bone callus).

Due to the adhesion of the dura mater to the bones of the skull, there is no epidural space in the skull as in the medulla. In the brain, the main artery that supplies the dura mater is the middle meningeal artery, a branch of the maxillary artery.

The dura mater, unlike the other meninges, is richly innervated. As the brain lacks sensory nerve endings, all or any intracranial sensitivity is located in the dura mater, which is responsible for most headaches.

Dura Mater Folds : In some areas the inner layer of the dura mater detaches from the outer to form folds that divide the cranial cavity into widely communicating compartments. The main pleats are:

Sickle Cerebro : It is a median vertical sickle-shaped septum that occupies the longitudinal fissure of the brain, separating the two hemispheres.

Tent of Cerebellum : It projects forward as a transverse septum between the occipital lobes and the cerebellum. The tent cerebellum separates the posterior fossa from the middle cranial fossa, dividing the cranial cavity into a superior, or supratentorial, compartment and an inferior, or infratentorial, compartment. The free anterior edge of the tent cerebellum, called the tent notch, fits into the midbrain.

Saddle diaphragm : small horizontal blade that closes the sella turcica superiorly, leaving only a passage hole for the pituitary stalk. 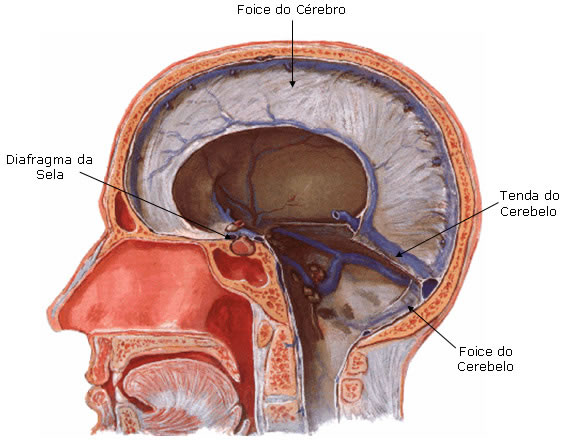 It is a very thin membrane, juxtaposed to the dura mater, from which it is separated by a virtual space, the subdural space, containing a small amount of liquid necessary for the lubrication of the contact surfaces of the membranes. The arachnoid is separated from the pia mater by the subarachnoid space that contains cerebrospinal fluid, with great communication between the subarachnoid spaces of the brain and spinal cord. It is also considered as belonging to the arachnoid, the delicate trabeculae that cross the space to connect to the pia mater, and that are called arachnoid trabeculae. These trabeculae resemble, an aspect of spider's webs, hence the name arachnoid.

Subarachnoid cisterns : the arachnoid is juxtaposed to the dura mater and both follow only roughly the brain and its surface. The pia mater adheres intimately to this surface that accompanies the gyri, furrows and depressions. Thus, the distance between the two membranes, that is, the depth of the subarachnoid space, is very variable, being very small in the gyri and large in the areas where part of the brain moves away from the cranial wall. Thus, in these areas, dilatations of the subarachnoid space, the subarachnoid cisterns, which contain a large amount of cerebrospinal fluid, are formed. The most important cisterns are the following:

Cisterna Magna : occupies the space between the inferior surface of the cerebellum and the dorsal surface of the medulla and roof of the third ventricle. It continues caudally with the subarachnoid space of the spinal cord and joins the fourth ventricle through the median opening. The cisterna magna is the largest and most important, and is sometimes used to obtain cerebrospinal fluid through punctures.

Chiasmatic Cistern : situated in front of the optic chiasm.

Superior Cistern : situated dorsal to the midbrain tectum, between the cerebellum and the splenium of the corpus callosum. The upper cistern corresponds, at least in part, to the ambient cistern, a term used by clinicians.

Cistern of the Lateral Fossa of the Brain : corresponds to the depression formed by the lateral sulcus of each hemisphere.

It is the innermost of the meninges, closely adhering to the surface of the brain and spinal cord, whose reliefs and depressions follow to the bottom of the cerebral sulci. Its deepest portion receives numerous extensions from nervous tissue astrocytes, thus constituting the pyoglial membrane. The pia mater gives resistance to Organs nervous organs, as the nervous tissue is very soft in consistency. The pia mater accompanies the vessels that enter the nervous tissue from the subarachnoid space, forming the outer wall of the perivascular spaces.

In this space there are extensions of the subarachnoid space, containing liquor, which forms a protective cuff around the vessels, very important to dampen the effect of the pulsation of the arteries on the surrounding tissue. It was found that the perivascular spaces accompany the larger vessels to a small distance and end by fusion of the pia with the adventitia of the vessel. Small arterioles are enveloped to the capillary level by prevascular astrocytes of nervous tissue. 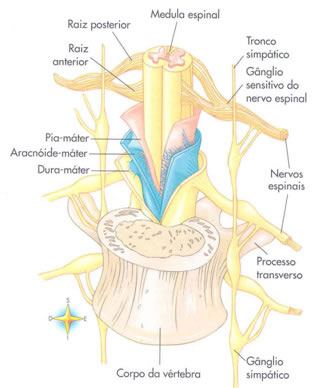 The extradural or epidural space is usually not an actual space but only a potential space between the bones of the skull and the outer periosteal layer of the dura mater. It becomes a real space only pathologically, for example, in extradural hematoma.

It is a watery, colorless fluid that occupies the subarachnoid space and ventricular cavities. Their primary function is mechanical protection of the central nervous system.

Formation, Absorption and Circulation of Liquor : 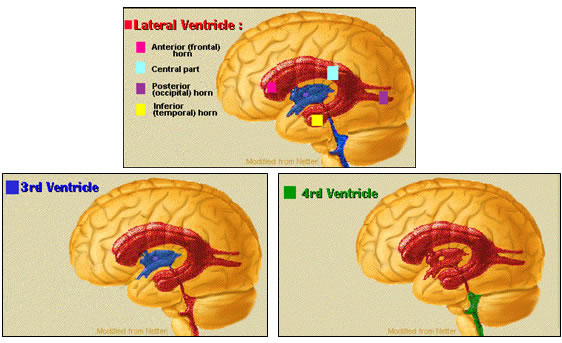 Through the median and lateral openings of the fourth ventricle, CSF passes into the subarachnoid space, being reabsorbed mainly by arachnoid granulations that project into the dura mater. As these granulations predominate in the superior sagittal axis, the circulation of cerebrospinal fluid is from bottom to top, having to cross the space between the tent notch and the midbrain. In the subarachnoid space of the spinal cord, the CSF descends in a caudal direction, but only a part returns, because CSF reabsorption occurs in the small arachnoid granulations existing in the prolongations of the dura mater that accompany the roots of the spinal nerves.

CSF circulation is extremely slow and the factors that determine it are still discussed. Undoubtedly, the production of liquor at one end and its absorption at the other are enough to cause its movement. Another factor is the pulsation of the intracranial arteries, which, with each systole, increases CSF pressure, possibly contributing to pushing CSF through the arachnoid granulations. 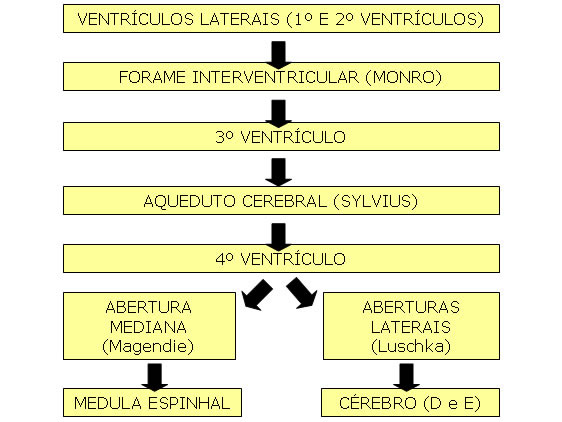