The nervous system is made up of noble and highly specialized structures, which require a permanent and high supply of glucose and oxygen for their metabolism. The consumption of oxygen and glucose by the brain is very high, which requires a very intense blood flow. Drops in the concentration of glucose and oxygen in the circulating blood or, on the other hand, the interruption of blood flow to the brain are not tolerated for a very short period.

The interruption of cerebral circulation for more than seven seconds causes the individual to lose consciousness. After about five minutes, lesions begin to appear that are irreversible, since, as is known, nerve cells do not regenerate.

Cerebral blood flow is very high, surpassed only by that of the kidney and heart. It is estimated that in one minute an amount of blood circulates through the brain approximately equal to its own weight.

Arterial Vascularization of the Brain

The brain is vascularized through two systems: Vertebrobasilar (vertebral arteries) and Carotid (internal carotid arteries). These are arteries that are specialized for irrigation of the brain. At the base of the skull these arteries form an anastomotic polygon, the Polygon of Willis, from which the main arteries for cerebral vascularization come out.

Branch of bifurcation of the common carotid, the internal carotid, after a more or less long course through the neck, enters the cranial cavity through the carotid canal of the temporal bone. It then perforates the dura mater and arachnoid and, at the beginning of the lateral sulcus, divides into two terminal branches: the middle and anterior cerebral arteries. The internal carotid artery, when blocked, can lead to irreversible brain death. A clogged carotid artery is a serious and unfortunately common occurrence. Clinically, the internal carotid arteries and their branches are often referred to as the anterior circulation of the brain.

The vertebral arteries run superiorly into the brain from the subclavian arteries near the back of the neck. They pass through the transverse foramina of the first six cervical vertebrae, pierce the atlanto-occipital membrane, the dura mater, and the arachnoid, and enter the skull through the foramen magnum. They then run along the ventral surface of the medulla and, approximately at the level of the medulla-pontine sulcus, merge to form a single trunk, the basilar artery. The vertebral arteries also give rise to the posterior inferior spinal and cerebellar arteries.

Below, we have a schematic summary of brain vascularization: 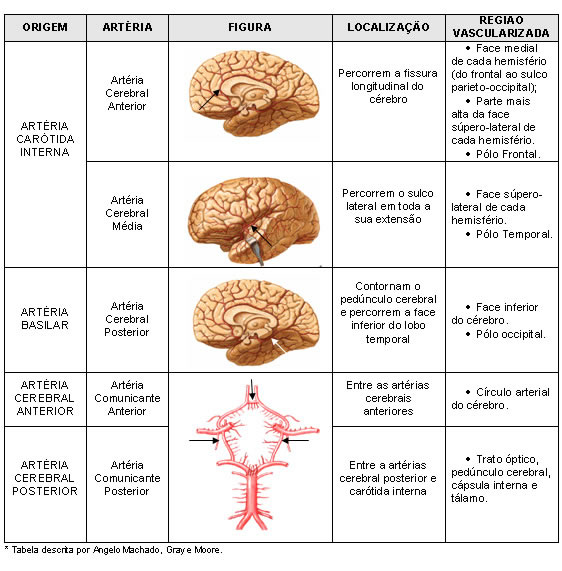 Venous Vascularization of the Brain

The veins of the brain, in general, do not accompany the arteries, being larger and more caliber than them. They drain into the sinuses of the dura mater, from where the blood converges to the internal jugular veins, which receive virtually all of the cerebral venous blood.

The veins of the brain are arranged in two systems: superficial venous system and deep venous system. Although anatomically distinct, the two systems are joined by numerous anastomoses.

Deep Venous System – Drain blood from regions located deeper in the brain, such as the striatum, internal capsule, diencephalon and much of the medullary white center of the brain. The most important vein in this system is the great cerebral vein or vein of Galen, into which all the blood of the deep venous system of the brain converges.