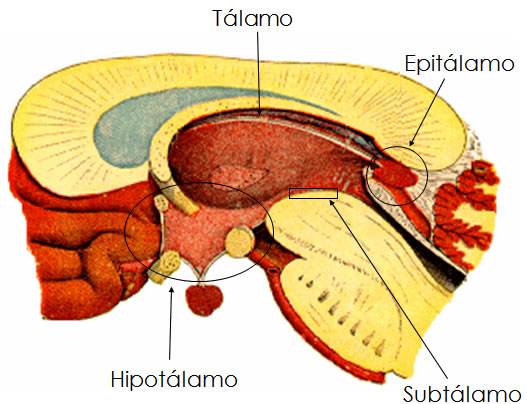 It is a cavity in the diencephalon, unpaired, that communicates with the fourth ventricle through the cerebral aqueduct and with the lateral ventricles through the respective interventricular foramina. 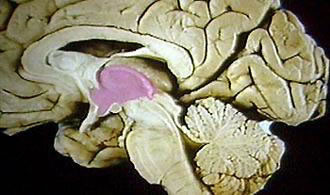 When the brain is sectioned in the midsagittal plane, the lateral walls of the third ventricle are exposed widely; then there is a depression, the hypothalamic sulcus, which extends from the cerebral aqueduct to the interventricular foramen. The portions of the wall above this groove belong to the thalamus; and those situated below, belong to the hypothalamus.

The following formations are found on the floor of the III ventricle, from anterior to posterior: optic chiasm, infundibulum, tuber cinereum and mammillary bodies, belonging to the hypothalamus. interthalamic, which appears only sectioned.

The very small posterior wall of the ventricle is formed by the epithalamus, which is located above the hypothalamic sulcus. Leaving each side of the epithalamus and running along the highest part of the lateral walls, there is a bundle of nerve fibers, the medullary striae of the thalamus, where the choroidal meshwork, which forms the roof of the third ventricle, is inserted. From the choroid screen, the choroid plexuses of the third ventricle invaginate into the ventricular lumen, which are arranged in two parallel lines and are continuous, through the respective interventricular foramina, with the choroid plexuses of the lateral ventricles.

The anterior wall of the III ventricle is formed by the lamina terminalis, a thin lamina of nervous tissue, which unites the two hemispheres and is arranged between the optic chiasm and the anterior commissure. The anterior commissure, lamina terminalis, and adjacent parts of the lateral walls of the third ventricle belong to the telencephalon. The lumen of the third ventricle evaginates to form four recesses in the region of the infundibulum:

Pineal Recess , in the stem of the pineal gland;

Suprapineal Recess , above the pineal body. 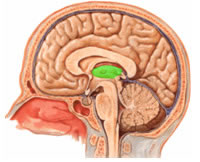 The thalamus, about 3 cm long, making up 80% of the diencephalon, consists of two paired ovulated masses of gray matter, organized into nuclei, with tracts of white matter in their interior. In general, a gray matter connection, called an intermediate mass (interthalamic adhesion), joins the right and left parts of the thalamus. The anterior end of each thalamus has an eminence, the anterior tubercle of the thalamus, which participates in the delimitation of the interventricular foramen.

The posterior end, considerably larger than the anterior, has a large eminence, the pulvinar, which projects over the lateral and medial geniculate bodies.

The medial geniculate body is part of the auditory pathway, and the lateral part of the optic pathway, and both are considered by some authors as a division of the diencephalon called the metathalamus. 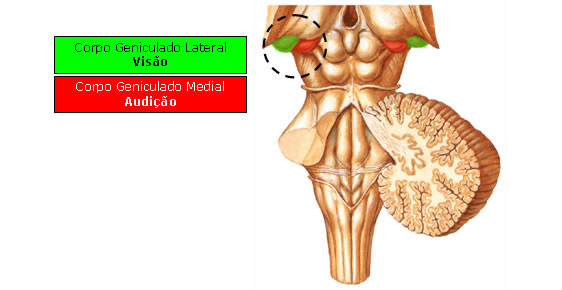 Some nuclei transmit impulses to the sensory areas of the brain:

The thalamic nuclei can be divided into five groups:

Activation of the Cortex;

It plays some role in the wakefulness, or alertness, mechanism. 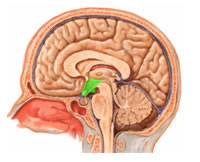 It is a relatively small area of the diencephalon, situated below the thalamus, with important functions mainly related to visceral activity.
The hypothalamus is part of the diencephalon and is arranged on the walls of the third ventricle, below the hypothalamic sulcus, which separates
the thalamus. It presents some anatomical formations visible on the inferior surface of the brain: the optic chiasm, the tuber cinereum, the infundibulum and the mammillary bodies. This is a very small area (4 g), but despite this, the hypothalamus, due to its numerous and varied functions, is one of the most important areas of the nervous system.

Mamillary Bodies : These are two rounded eminences of gray matter evident in the anterior part of the interpeduncular fossa.

Optic chiasm : located in the anterior part of the ventricular floor. It receives myelinated fibers from the optic nerve, which partly cross there and continue in the optic tracts that go to the lateral geniculate bodies, after bypassing the cerebral peduncles.

Tuber Cinereum : is a slightly gray, median area situated behind the chiasm and optic tract, between the mammillary bodies. In the tuber cinereum, the pituitary gland is attached through the infundibulum. 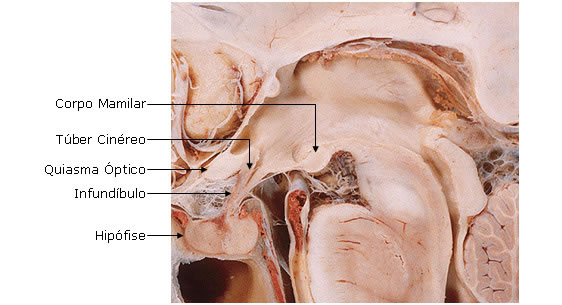 Control of the autonomic nervous system;

Regulation of sleep and wakefulness;

Regulation of the endocrine system;

Generation and regulation of circadian rhythms. 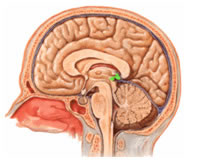 It limits the third ventricle posteriorly, above the hypothalamic sulcus, already in the transition with the midbrain. Its most evident element is the pineal gland, an endocrine gland with a piriform, odd and median shape, which rests on the mesencephalic roof. The base of the pineal body is attached anteriorly to two transverse bundles of fibers that cross a median plane, the posterior commissure and the commissure of the habenulae, between which a small extension of the ventricular cavity, the pineal recess, penetrates the pineal gland.

Therefore, the epithalamus is formed by:

Habenula Trine – triangular area at the posterior end of the thalamic tapeworm next to the pineal body.

Pineal body – is a gland-like structure, approximately 8 mm in length, that lies between the superior colliculi. Although its physiological role is not yet fully understood, the pineal gland secretes the hormone melatonin, thus being an endocrine gland. Melatonin is considered to promote sleep and also appears to contribute to the adjustment of the body's biological clock.

Posterior Commissure – is a rounded fiber bundle that crosses the midline at the junction of the aqueduct with the anterior third ventricle and superior to the superior colliculus. It marks the boundary between the midbrain and diencephalon.

With the exception of the posterior commissure, all non-endocrine formations of the epithalamus belong to the limbic system, thus being related to the regulation of emotional behavior.

It comprises the transition zone between the diencephalon and the integument of the midbrain. Its visualization is better in frontal sections of the brain. It is found to be located below the thalamus, being limited laterally by the internal capsule and medially by the hypothalamus. The subthalamus has white and gray matter formations, the most important being the subthalamic nucleus. Lesions to the subthalamic nucleus cause a syndrome known as hemiballismus, characterized by abnormal movements of the extremities.