They are individualized structures that cross one or more joints and, through their contraction, are able to transmit movement to them. This is carried out by specialized cells called muscle fibers, whose latent energy is or can be controlled by the nervous system. Muscles are able to transform chemical energy into mechanical energy.

Live muscle is red in color. This reddish coloration of muscle fibers is due to myoglobin, a protein similar to hemoglobin present in red blood cells, which plays the role of conserving some O2 from the circulation for oxidative metabolism.

a) Production of Body Movements: Global body movements, such as walking and running.

b) Stabilization of Body Positions : The contraction of skeletal muscles stabilize the joints and participate in the maintenance of body positions, such as standing or sitting.

c) Regulation of Organ Volume : Sustained contraction of the ring bands of smooth muscles (sphincters) can prevent the contents of a hollow organ from escaping.

d) Movement of Substances within the Body : The contractions of the smooth muscles of the walls of the blood vessels regulate the intensity of the flow. Smooth muscles can also move food, urine, and gametes from the reproductive system. Skeletal muscles promote the flow of lymph and the return of blood to the heart.

e) Heat Production : When muscle tissue contracts it produces heat and much of this heat released by the muscle is used to maintain body temperature.

As for the shape :

a) Rectum : Parallel to the midline. Example: Rectus abdominis.

b) Transverse : Perpendicular to the midline. Example: Transversus abdominis.

As for Origin and Insertion :

a) Origin : When they originate from more than one tendon. Ex. Biceps, Quadriceps.

b) Insertion : When they are inserted into more than one tendon. Ex: Flexor digitorum longus.

a) Agonists : These are the main muscles that activate a specific movement of the body, they actively contract to produce a desired movement. Ex: Picking up a key on the table, agonists are the flexors of the fingers.

c) Synergists : They are those who participate by stabilizing the joints so that undesirable movements do not occur during the main action. Ex: idem above, synergists are stabilizers of the wrist, elbow and shoulder.

d) Fixatives : Stabilize the source of the agonist so that it can act more efficiently. They stabilize the proximal part of the limb when moving the distal part. 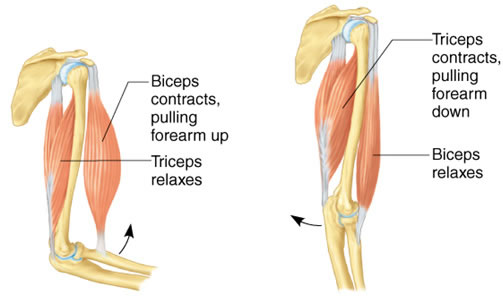 The name given to muscles is derived from several factors, including physiological and topographic:

a) Action : Extensor of the fingers.

b) Action Associated with Shape : Pronador Redondo and Pronador Quadrado.

c) Action Associated with Location : Superficial Flexor of the Fingers.

a) Skeletal striated muscles : They contract under the influence of our will, that is, they are voluntary. Skeletal muscle tissue is called striated because alternating light and dark bands (striations) can be seen under a light microscope.

b) Smooth Muscles : Located in the blood vessels, airways and most organs of the abdominal-pelvic cavity. Involuntary action controlled by the autonomic nervous system. 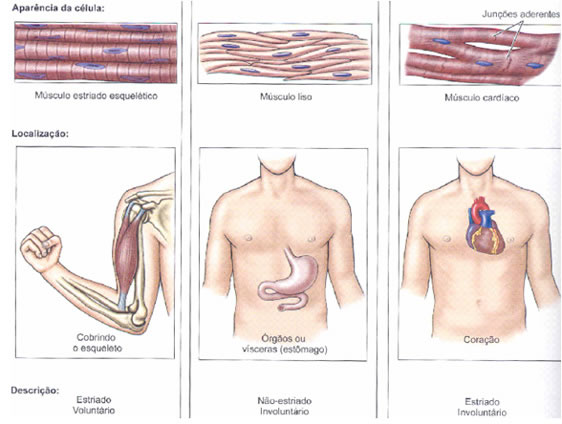 a) Muscle belly is the contractile portion of the muscle, consisting of muscle fibers that contract. It constitutes the body of the muscle (fleshy portion).

b) Tendon is an element of connective tissue, rich in collagen fibers and which serves to fix the belly, bones, subcutaneous tissue and joint capsules. They have a morphological appearance of ribbons or cylinders.

c) Aponeurosis is a structure formed by connective tissue. Membrane that surrounds muscle groups. It usually appears in the form of blades or fans.

d) Tendon sheaths are structures that form bridges or tunnels between the bone surfaces over which the tendons slide. Its function is to contain the tendon, allowing it to glide easily.

e) Synovial pouches are found between muscles or between a muscle and a bone. They are small pouches lined by a serous membrane that allow muscle sliding.

The name given to muscles is derived from several factors, including physiological and topographic:

a) Concentric contraction : the muscle shortens and pulls another structure, such as a tendon, reducing the angle of a joint. Ex: Bringing a book that was on the table to the head.

b) Eccentric contraction : when the total length of the muscle increases during contraction. Ex: Same as above, but when we put the book back on the table.

c) Isometric contraction : they serve to stabilize the joints while others are moved. It generates muscle tension without performing movements. It is responsible for the posture and support of objects in a fixed position. Ex: idem above, but when the book is held in 90° abduction.

a) Superficial fascia separates the muscles from the skin.

b) Muscular fascia is a sheet or broad band of fibrous connective tissue, which, below the skin, surrounds the muscles and other organs of the body.

c) Epimysium is the outermost layer of connective tissue, surrounding the entire muscle.

d) Perimysium surrounds groups of 10 to 100 or more individual muscle fibers, separating them into bundles called fascicles. The fascicles can be seen with the naked eye.

e) Endomysium is a thin covering of connective tissue that penetrates the interior of each fascicle and separates individual muscle fibers from their neighbors. 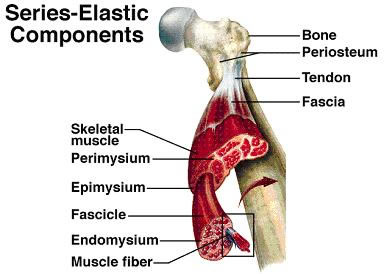 Muscles of the Temporomandibular Joint