The function of the respiratory system is to provide the body with an exchange of gases with atmospheric air, ensuring a permanent concentration of oxygen in the blood, necessary for metabolic reactions, and on the other hand serving as a route for the elimination of residual gases, which result from these reactions and that are represented by the gas 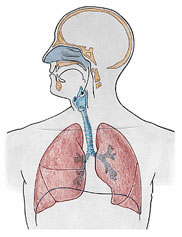 The airways can be divided into: NOSE, PHARYNX, LARYNX, TRACHEA, BRONCHI and LUNGS.

The nose is a protuberance located in the center of the face.

The external nose is shaped like a triangular pyramid with a lower base and whose posterior face fits vertically in the middle 1/3 of the face.

The lateral faces of the nose have a semilunar protrusion that is called the nose wing.

Air enters the respiratory tract through two openings called nostrils . It then flows through the right and left nasal cavities, which are lined with respiratory mucosa. The nasal septum separates these two cavities. The hairs inside the nostrils filter large particles of dust that can be inhaled. In addition, the nasal cavity contains receptor cells for smell. 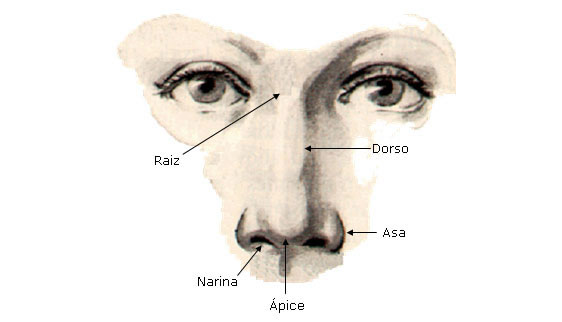 The nasal cavity is the excavation that we find inside the nose, it is subdivided into two compartments, one right and one left. Each compartment has an anterior orifice called the Nostril and a posterior one called Coana . The choanas communicate the nasal cavity with the pharynx. It is in the nasal cavity that the air becomes conditioned, that is, it is filtered, moistened and heated. 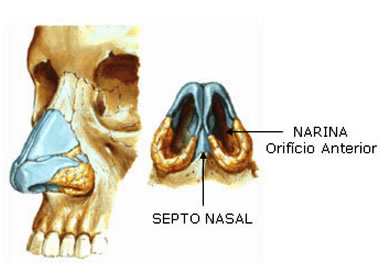 On the lateral wall of the nasal cavity we find the Concha Nasal (turbinate) which are divided into Superior, Middle and Inferior .

The bony skeleton of the nose is formed by the frontal bone, nasal bones and jawbones.

The nasal cavity contains several drainage openings through which mucus from the sinuses drains. The Paranasal Sinuses comprise the maxillary , frontal , ethmoid and sphenoid sinuses. 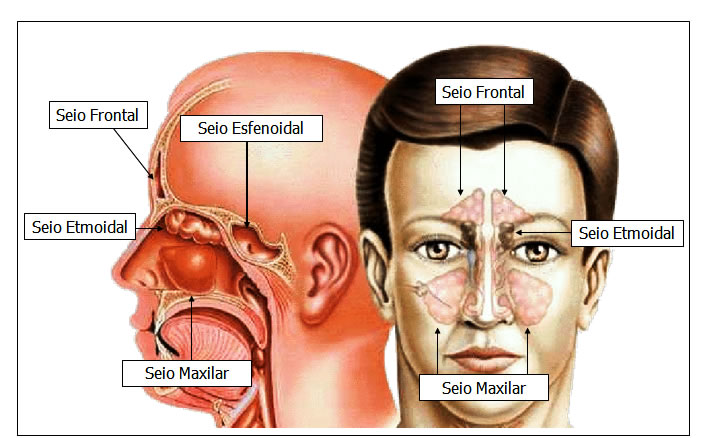 Paranasal Sinuses or Sinuses – Side and Front Views 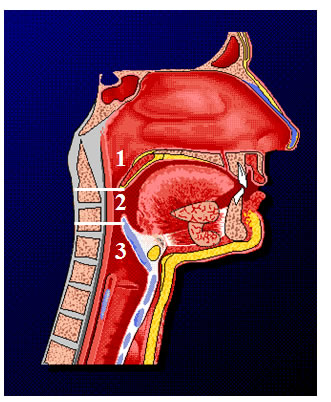 The pharynx is a tube that starts at the choana and extends down the neck. It lies just behind the nasal cavities and just in front of the cervical vertebrae. Its wall is composed of skeletal muscles and lined with mucous membrane. The pharynx functions as a passage for air and food. The pharynx is divided into three anatomical regions: Nasopharynx, Oropharynx and Laryngopharynx.
The upper portion of the pharynx, called the nasal part or Nasopharynx , has the following communications: two with the choanae, two pharyngeal ostia of the auditory tubes and with the oropharynx. The Eustachian tube communicates with the pharynx through the pharyngeal osteum of the Eustachian tube, which in turn connects the nasal part of the pharynx with the middle tympanic cavity of the ear.
The middle part of the pharynx, the oropharynx , lies behind the oral cavity and extends from the soft palate to the level of the hyoid. The part of the oropharynx communicates with the mouth and serves as a passageway for both air and food.

The laryngopharynx extends downward from the hyoid bone, and connects with the esophagus (food channel) and anteriorly with the larynx (air passage). Like the oral part of the pharynx, the laryngopharynx is both an airway and a digestive tract.

The larynx is a short organ that connects the pharynx with the trachea. It is located on the midline of the neck, in front of the fourth, fifth and sixth cervical vertebrae.

The Larynx has three Functions :

Acts as a passage for air during breathing;

It produces sound, that is, the voice (for this reason it is called a voice box);

Prevents food and foreign objects from entering respiratory structures (such as the trachea).

The larynx plays a role in the production of sound, which results in phonation. On its inner surface, we find an anteroposterior cleft called the vestibule of the larynx, which has two folds: vestibular fold (false vocal cords) and vocal fold (true vocal cords). 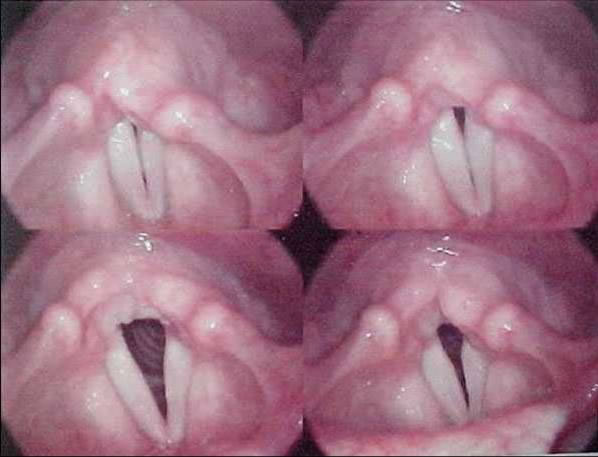 The larynx is a triangular structure consisting mainly of cartilage, muscles and ligaments.

The wall of the larynx is made up of nine pieces of cartilage. Three are odd ( Thyroid, Cricoid and Epiglottic Cartilage ) and three are even ( Arytenoid, Cuneiform and Corniculate Cartilage ).

Thyroid Cartilage consists of hyaline cartilage and forms the anterior and lateral wall of the larynx, it is larger in men due to the influence of hormones during puberty. The posterior margins of the blades present extensions in the form of thick and short stylets, called superior and inferior horns.

The epiglottis attaches to the hyoid bone and thyroid cartilage. The epiglottis is a kind of “door” to the lung, where only air or gaseous substances enter and leave it. Liquid and solid substances, on the other hand, do not enter the lung, as the epiglottis closes and it goes to the esophagus.

The Corniculate Cartilage lies above the arytenoid cartilage.

The Cuneiform Cartilage is very small and is located anterior to the corresponding corniculate cartilage, connecting each arytenoid to the epiglottis.

The trachea is a tube 10 to 12.5 cm long and 2.5 cm in diameter. It constitutes a tube that continues to the larynx, penetrates the thorax and ends up bifurcating into the 2 main bronchi. It lies medially and anterior to the esophagus, and only at its termination does it deviate slightly to the right.

The framework of the trachea is made up of approximately 20 incomplete cartilaginous rings backwards, which are called tracheal cartilages.

Internally, the trachea is lined by mucosa, where glands abound, and the epithelium is ciliated, facilitating the expulsion of mucous and foreign bodies.

Inferiorly, the trachea bifurcates, giving rise to the 2 main bronchi: right and left.

The lower part of the junction of the main bronchi is occupied by an anteroposterior protrusion that is called the carina of the trachea, and serves to accentuate the separation of the 2 bronchi.

The main bronchi connect the trachea with the lungs, they are considered a right and a left. The trachea and extrapulmonary bronchi are made up of incomplete rings of hyaline cartilage, fibrous tissue, muscle fibers, mucosa, and glands.

The right main bronchus is more vertical, shorter and wider than the left. Like the trachea, the main bronchi contain incomplete rings of cartilage.

The main bronchi enter the lungs in the region called the HILO . Upon reaching the corresponding lungs, the main bronchi subdivide into the lobar bronchi .

The lobar bronchi are subdivided into segmental bronchi , each of which is distributed to a pulmonary segment.

The bronchi divide respectively into smaller and smaller tubes called bronchioles . The walls of the bronchioles contain smooth muscle and lack cartilage.

The bronchioles continue to branch, and give rise to tiny tubules called Alveolar Ducts .

Alveoli are tiny air sacs that form the end of the airway. A pulmonary capillary surrounds each alveolus.

The function of the Alveoli is to exchange oxygen and carbon dioxide across the alveolar-pulmonary capillary membrane. 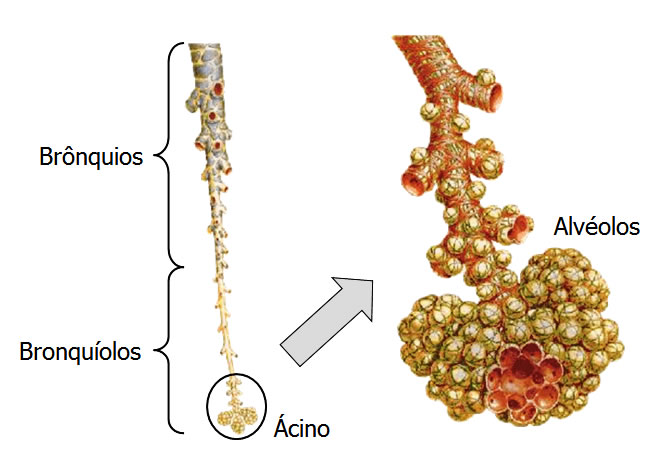 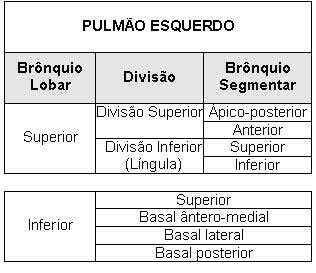 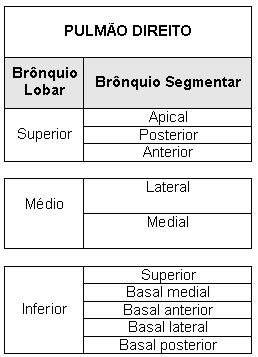 * Tables schematizing the lobar and segmental bronchi of each lung. Images can be viewed below.

The lungs are essential organs in breathing. There are two viscera located one on each side, inside the thorax and where the atmospheric air meets the circulating blood, then gas exchange occurs (HEMATOSIS). They extend from the diaphragm to just above the collarbones and are juxtaposed to the ribs. The right lung is thicker and wider than the left. It is also slightly shorter as the diaphragm is higher on the right side to accommodate the liver. The left lung has a concavity which is the cardiac notch. Each lung is shaped like a pyramid with an apex, a base, three edges and three faces. 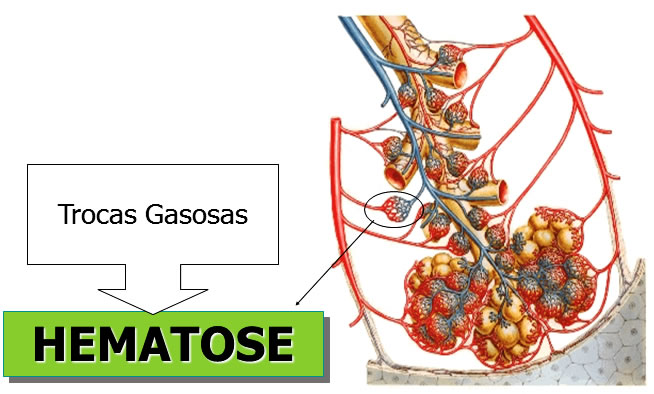 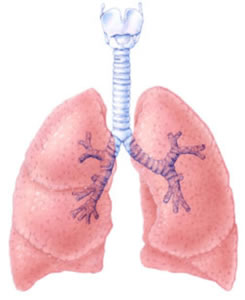 Lung Base : The lung base has a concave shape, resting on the upper surface of the diaphragm. The concavity at the base of the right lung is deeper than that of the left (due to the presence of the liver).

Lung Margins : The lungs have three margins: an Anterior, a Posterior , and an Inferior .

Weight : The lungs have an average weight of 700 grams.

Height : The lungs have an average height of 25 centimeters.

Faces : The lung has three faces: 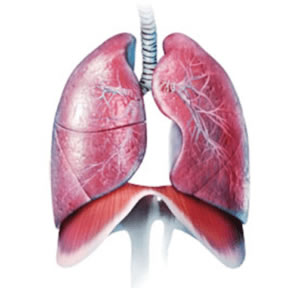 a) Costal face (lateral face) : it is the relatively smooth and convex face, facing the inner surface of the thoracic cavity.

b) Diaphragmatic face (inferior face) : it is the concave face that rests on the diaphragmatic dome.

c) Mediastinal face (medial face) : is the face that has a concave region where the heart is accommodated. Dorsally is the region called the hilum or root of the lung.

The Left Lung is divided into an upper lobe and a lower lobe by an oblique fissure. Anteriorly and inferiorly, the upper lobe of the left lung presents a structure that represents remnants of the embryonic development of the middle lobe, the lingula of the lung.

Each lung lobe is subdivided into lung segments, which constitute complete lung units, considered autonomous from an anatomical point of view. 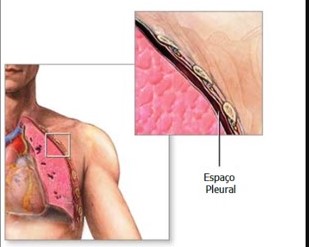 Between the visceral and parietal pleura there is a small space, the Pleural Cavity , which contains a small amount of lubricating fluid, secreted by the tunics. This liquid reduces the friction between the tunics, allowing them to slide easily over each other while breathing.

The hilum region is located on the mediastinal surface of each lung being formed by the structures that arrive and leave it, where we have: the Main Bronchi, Pulmonary Arteries, Pulmonary Veins, Bronchial Arteries and Veins and Lymphatic Veins.

The bronchi occupy a caudal and posterior position, while the pulmonary veins are inferior and anterior. The pulmonary artery occupies a superior and median position in relation to these two structures. The root of the right lung is dorsal to the superior vena cava. The root of the left lung relates anteriorly to the phrenic nerve. Later it is related to the Vagus Nerve. 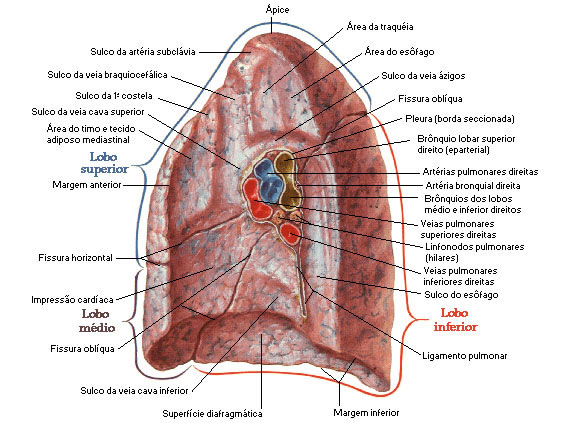 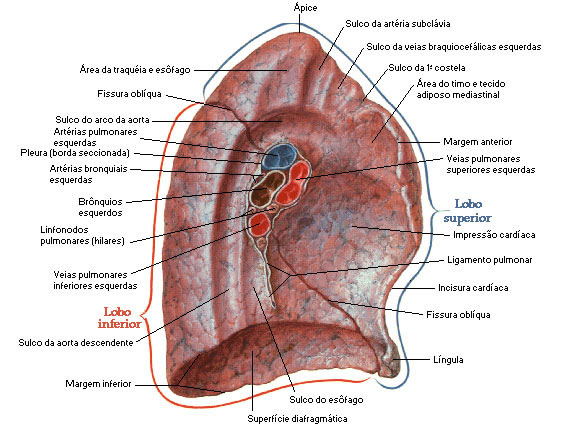